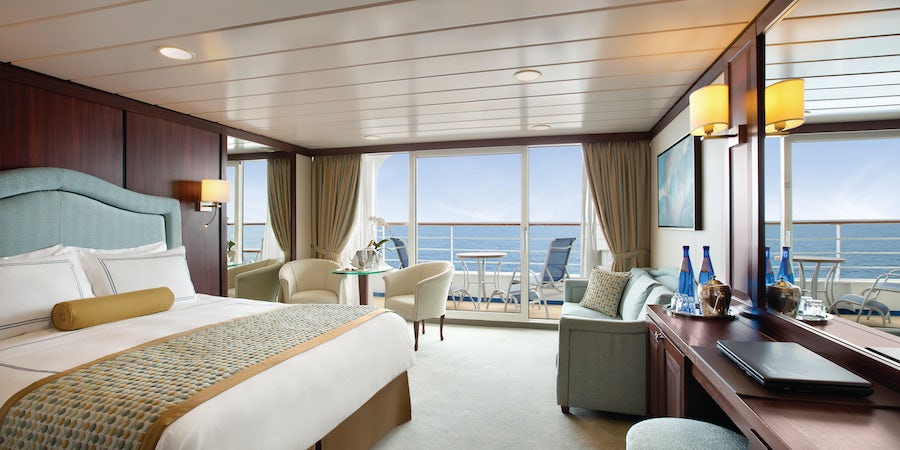 Best Cabins on Any Cruise Ship

Cabin placement can have a major impact on your cruise experience, regardless of the cruise line or ship you've chosen. Some love balconies, others enjoy the peacefulness of a darkened interior room.

Knowing your preferred category is a good starting point, but homing in on the best cabins within that category on any given ship takes a bit more work.

Do you choose a cruise cabin at the back of the ship? In the middle? At the front? The truth is, there is no objective answer to the question, "What is the best cabin position on a cruise ship?" It all depends on what's important to you. Here are some other possible cruise placement criteria to help you decide what the best room on a cruise ship would be for you.

Aft cabins, which are cabins found at the back of the ship, have some of the largest balconies on a cruise ship. This is because there are usually just a few rooms lined up along the back of a ship, giving each one more space for a bigger balcony. In particular, aft cabins located on the corners of the ship often have wraparound balconies, creating enough space for chairs, loungers and sometimes a small dining table.

Larger balcony cabins are also found on the so-called hump of cruise ships (the hump of a ship is the midship curved portion). Hump cabins located where the ship transitions from a narrower to a wider width have angled balconies that may be a little roomier than a typical balcony.

Standard-size cabins with oversized balconies are also sometimes sandwiched between suites. Suites themselves are usually the best option if cruising with a guaranteed big balcony is your goal.

Cruisers with a sensitivity to motion and/or are prone to seasickness will do best midship (midway between front and back) and on a low deck. Picture the ship balancing on a fulcrum. You want to be as close to the pivot point as possible to feel the least movement.

Avoid cabins near the front (bow) or back (stern) and on decks higher than the middle deck of the ship. So, on a ship with fourteen passenger decks, your best options are below deck seven.

If you have motion sensitivity, avoid interior cabins. It’s not that you’ll feel more motion in them per se, but you won’t have the opportunity to get fresh air or a view of the horizon. Both can help calm the queasiness without you having to leave the cabin.

If you want the quietest cruise ship cabin possible, skip rooms near potentially noisy areas like under the pool deck or buffet, across the hall from laundry rooms or a crew entry door, and under or over the casino, theater or nightclub.

You'll also want to avoid cabins low and forward in the ship (where the anchor being lowered or raised can generate a lot of sound). The same goes for aft rooms (where the ship's generators create a hum that rarely, if ever, stops). Cabins near banks of elevators have been historically called out as noisy, but more so due to rowdy crowds gathering there than mechanical noise.

The rule of thumb for finding the most peace and quiet is to insulate yourself with other passenger cabins -- on either side of you, across from you and both above and below you.

Most cruise ships have a choice of fully accessible cabins for those that require mobility aids. If your preference is to stay in a non-modified stateroom, you can still rely on the expertise of the design engineers, who generally place modified cruise cabins near the central elevators.

That cabin placement allows the easiest access to the ship’s main features like dining and large entertainment venues. More importantly, that placement allows crew-assisted evacuation in an emergency.

Often the best choice for cruisers with mobility impairments is to choose a cabin nearest the ship’s attractions that matter most to you, whether that’s the casino, the pool or the spa.

If you plan to spend lots of time in the spa, relaxing on a heated lounger or soaking in the ship's thalassotherapy pool, you'll want to get a room as close to the spa as you can get. (That way you don't have to traverse the entire ship in your robe and slippers!)

On some ships, you can find designated spa cabins on the same deck as the spa; on others, you'll probably be one or two decks away, sometimes with a semi-private elevator or staircase directly into the spa.

The most obvious room location for any aquaphile is as close to a pool as you can get. On some cruise ships, you can get a cabin on the same deck as a pool, so it's out your door and a quick stroll to paradise. On other ships, you might have to get a cabin one deck below the pool.

For those who love the sea and its soothing sounds, outside cabins are the obvious choice. Be sure to snag a balcony room, though, if you're on higher floors.

Among the cabin placements we’ve already talked about, there are options to fit almost any budget. For instance, even spa and pool fans can opt for an inexpensive interior cabin with easy access to the spa or one of the ship’s pools.

Also, every ship has a handful of unique staterooms that often come with a slightly lower price tag because they don’t match other cabins in the category. It could be a balcony cabin with a smaller porthole-like opening in the ship’s hull or an odd-shaped interior cabin on the same plush hallway with the ship’s fanciest suites.

Finding these oddballs can be a bit of a treasure hunt, but one worth your time if saving money is your main goal.