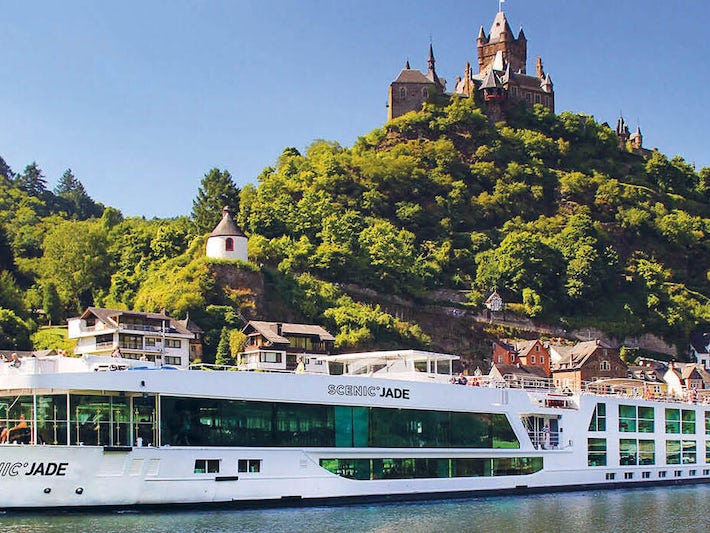 Scenic Jade offers the intellectually curious passenger a fine sampler of excursions along more than 700 miles of waterways, from Amsterdam to Budapest. It's a 14-night history class, taught at a gliding pace where the events took place. The Scenic philosophy is that, while life onboard the ship is relaxed, the passengers (169 maximum) book for the enrichment of shore excursions, either guided by able locals or a clever device that offers recorded, GPS-sensitive presentations. The device includes narrated tours for 18 port calls and hundreds more brief comments along the river route.

Additionally, each passenger receives an annotated route map, plus Scenic's own 430-page lavishly illustrated paperback guidebook about the itinerary.

Parent company Scenic terms voyages on its "space ships" as "luxury river cruising," and to that end, the vessel has some notable pluses:

About 85 percent of its cabins have balconies boasting a go-the-extra-mile innovation: floor-to-ceiling glass panels that can be manoeuvred to fold flat, opening the whole cabin to the balcony.

The vessel is uncommonly vibration free and quiet, largely because its twin engines are on rubber mounts. While we motored on the Danube, I couldn't hear the engine even when I could hear the conversation of two men fishing from a boat 30 yards away. There's a sliding scale of butler service to every cabin.

Get Scenic Jade price drops
250,000+ people have entered their email

The vessel carries electric-power-assisted bicycles to encourage passengers to join guided shore tours or pedal off on their own. While there are other, smaller touches that live up to Scenic's luxury billing, there's also one significant shortcoming -- the food and its presentation. The menu promises more than the galley delivers, and hot items are often little more than room temperature.

But that's not a deterrent to Scenic loyalists; the company reports that nearly 50 percent of passengers book again with the company after a trip. And Scenic has also made a name for itself by offering one of river cruising's most inclusive products, with gratuities, airport transfers, shore tours and beverages built into its fares. That means not only will you learn something about Western Europe on this cruise, you won't be presented with a hefty bill at vacation's end.

Roughly 90 percent of Scenic's passengers are between the ages of 55 and 75, with an average of 68. About half are retired, and the cruise line reports the typical passenger is a homeowner who takes at least one international trip per year. This average traveler has an income of more than $150,000 and/or a net worth greater than $1 million.

Because much of the voyage takes place off the ship on walking or bike tours, passengers tend to wear comfortable clothing, such as shorts, polo shirts or sleeveless tops for women.

In the Panorama Lounge and Bar, the only indoor gathering place on Scenic Jade, slacks and collared shirts or blouses are the norm. Occasionally, men wear blue jeans, but T-shirts bearing messages are seldom seen anywhere on the ship.

The cruise line suggests the amorphous "resort casual" -- but no shorts -- at dinner, served in the only dining room. However, because older folks tend to favor a dressier look, some men do wear blazers (and even ties) to dinner, and some women can be found in cocktail dresses.

There are two occasions when everyone tends to dress up: the fixed-menu dinners in Portobello's and La Rive.

Where does Scenic Jade sail from?

Where does Scenic Jade sail to?

How much does it cost to go on Scenic Jade?

A First-timer's Review of the Scenic Jade

And two days after we boarded the Jade, we received an email from Scenic notifying us of the change in boarding location—a little late.) We did end up boarding the Scenic Jade.Read More
loriva

Great cruise, shame about the travel.

Well, first of all, we did not cruise on Scenic Crystal but on Scenic Jade. Obviously this website has not caught up with the late change.Read More
Beau Block

We started on the Jade and had to switch to the Jasper at Regensburg. The river was too low due to dry conditions. It's the nature of the beast so take it in stride.Read More
Beth and Barry

Did not live up to reputation

Booked with Scenic because of there percieved reputation as being the best.Read More
cliffjenkins