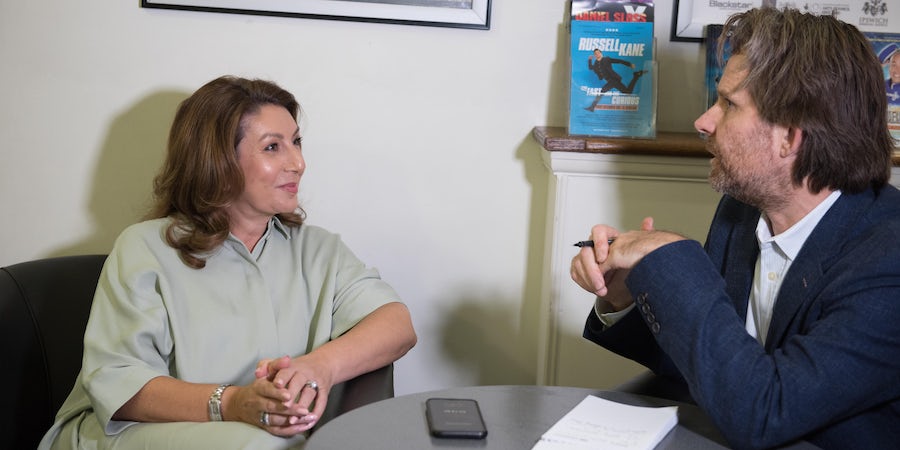 The 10 Most Popular Episodes of “Cruising with Jane McDonald”

Jane McDonald might be stepping down from the award-winning Channel 5 show "Cruising with Jane McDonald" in 2020, but that doesn’t mean you can’t binge watch your favourite episodes thanks to the network’s My5 Catch Up channel.

To help you decide where to start, we’ve compiled the most popular episodes based on viewing figures from all seven seasons of the show, including the spin-off "Cruising with Jane McDonald: Down Under".

This list is based on viewing figures taken from Barb (Broadcasters’ Audience Research Board) and is based on a 28-day viewing period from the date each episode first aired.

The 10 most popular episodes of "Cruising with Jane McDonald", in reverse order.

Everything you need to know about "Cruising with Jane McDonald"

Editor's note: Channel 5's My5 Catch Up channel is only available in the UK. If you're trying to view from outside of the UK, give You Tube a try.

The 10th most popular episode of "Cruising with Jane McDonald" also happens to be the very first, which originally aired in February 2017. Viewers who tuned in for the opening show saw the singer and TV presenter join MSC Cruises’ Miami-based MSC Divina for a fun-filled Caribbean voyage with calls in Nassau, St Martin and Puerto Rico. The ship’s party atmosphere and Jane’s fun-loving nature captivated households across the UK and spurred a cult following of the show that would lead to a further six seasons spanning three years.

At number nine is this feel-good one-hour Christmas Special shot in picturesque Norway. The December 2019 episode saw Jane make the iconic voyage from Bergen in the south to Kirkenes in the Arctic. The show took viewers on an exhilarating journey as Jane feasted with Vikings, caught king crab and trekked to the most northerly part of mainland Europe, the North Cape.

In February 2017, Jane embarked on a mini cruise close to home -- in Scotland's Inner Hebrides and the Isle of Mull on the tiny Glen Tarsan. Jane was joined by just six other passengers on what was the smallest cruise the singer has ever been on, visiting Treshnish Islands, home to hundreds of puffins, and the famous Fingal’s Cave on Staffa island, which inspired Mendelssohn’s "Hebrides Overture".

In this second instalment of series four, Jane continued her journey in Australia(

Remember Jane’s famous take on Abba? Well it occurred at the end of episode one of season two, following Jane’s exhilarating cruise onboard Viking Sky in the Baltic Sea. The episode was a memorable one(

/news/news.cfm?ID=8035), not only for showcasing this gorgeous Scandi-inspired ship, but also for inspiring two million viewers with the gorgeous sights of Tallinn, St Petersburg, Helsinki and, of course, Stockholm, where Jane got to visit the official Abba museum.

Boarding Princess Cruises’ 3,080-passenger Ruby Princess in Los Angeles, the first episode of season three saw Jane get a taste of California life from the comfort of this family-friendly ship. Onboard, Jane met former "Dallas" star Linda Gray, attended a wedding and was coated head-to-toe in chocolate for one of the line’s signature chocolate massages.

Over two million viewers tuned in to watch the final episode of series three, which saw Jane take to North America’s mighty Mississippi on the stunning American Queen -- the largest paddle steam vessel in operation. Boarding in the jazz capital of New Orleans, Jane took in the river’s famous ports, visiting a former plantation and the Louisiana State Penitentiary.

In this episode Jane joins one-ship line Iceland Pro Cruises for a circumnavigation voyage of Iceland. The ship -- Ocean Diamond -- is a former ferry vessel with an ice-strengthened hull that also navigates the icy waters off Greenland. Jane boarded the ship in Reykjavik and sailed around Iceland’s rugged coastline, taking in the northern lights, hot geysers, whale watching and a visit to the iconic Blue Lagoon.

Drum roll The all-time most popular episode of "Cruising with Jane McDonald" is... episode one of series four, which drew 2.4m viewers in June 2018. The episode formed part of a two-parter that saw Jane embark on an epic journey in Australia and New Zealand (part two appears at number seven on our list). This episode saw Jane begin a 14-night cruise on Noordam in Sydney, taking in the iconic Sydney Opera House with a backstage pass before setting sail for Tasmania and visiting the historic port of Hobart.