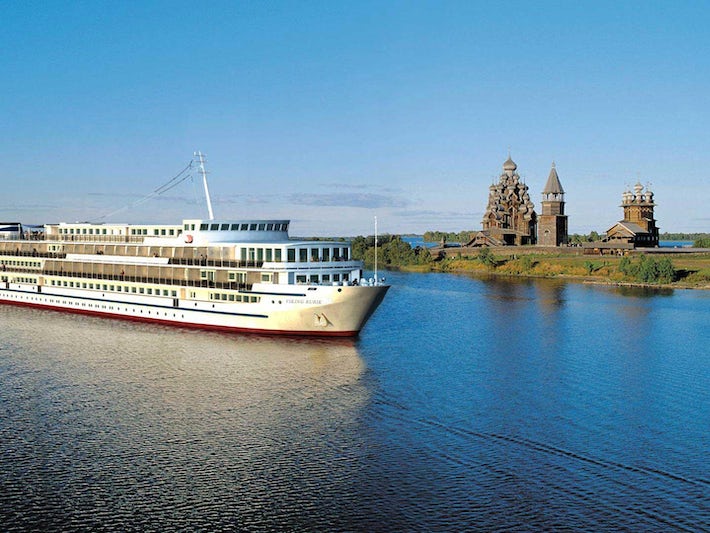 There's something about Russia that stumps even the most intrepid traveler. The language is daunting, the Cyrillic alphabet is difficult, and its 20th-century incarnation as the Soviet Union, aka the "Evil Empire" to Westerners, still lingers in the minds of many.

Viking strives to make this complex country approachable for its North American, British, Australian and New Zealand audience. With five of its own ships on the Russian rivers -- most of the competitors charter their boats -- the company has made a commitment to this region that's evident in its programming and excursion choices.

Viking Rurik, refurbished in 2012, maintains Viking's signature Scandinavian style with blonde wood, muted colors and simple, attractive design. Because it sails on some of Europe's largest lakes, Rurik is constructed to handle waves so it doesn't appear as "flat" as Viking's European longships. Still, those with sensitive stomachs should bring seasick medication, as waters on Lake Ladoga, the largest freshwater body of water in Europe, can get rough. One aspect of the decades-old ship that couldn't be redone: the stairs, which are among the steepest we've ever seen. (Step angles were 68 degrees, as measured by an iPhone app.) Many people opted for the elevator, which runs to all four public decks.

Another feature that required some adjustment is the ship's main lounge, the Sky Bar. Unlike those on most other European river ships, this lounge is on the Sun Deck level and therefore isn't big enough to handle all 210 passengers at once. Passengers learned to come early for port talks, lectures and enrichment programs, which were often staggered and telecast into the cabins so everyone could hear.

Despite the cramped lounge, Rurik's staff did an admirable job of managing passenger flow, and the ship itself rarely felt crowded. Passengers disembarked in groups, usually without too many complaints or backups. Russian-language posters, evocative photos and artwork throughout the public areas imbued a sense of place, while Russian movies -- both contemporary and classic -- played every day on the in-room TV's. Standout optional excursions, such as a traditional Russian banya (bath), a behind-the-scenes look at the Hermitage vaults and tickets to the Bolshoi Ballet, kept even the most veteran travelers excited and engaged.

All in all, a Russian river cruise on Rurik gives passengers plenty of opportunities to explore the country's elaborate palaces, breathtaking art collections and onion-domed churches. While getting a handle on all things Russian could take a lifetime, 12 days spent onboard provide the perfect beginning.

The average age of Viking Rurik's passengers has been decreasing every year, according to the ship's hotel manager. While the trip used to draw mostly those in their 70's, passengers are now typically in their late 50's and 60's, with a smattering of younger (for a river cruise) passengers in their 40's. The ship is also drawing more people outside North America, with British, Australian and New Zealand passengers onboard. Most people have taken at least one other river cruise before tackling Russia, and you'll hear stories of China, the Danube and the Rhine at dinner.

As with most river cruises, the ship eschews formal nights, and onboard dress is casual. Shorts and jeans are not permitted at dinner, however. Russia's weather can be iffy, even during the summer, so layers are a must. While dress at the Captain's Welcome and Farewell dinners seemed no different than it is on other nights, men and women who want to explore the theater scene in St. Petersburg and Moscow might want to throw in a sports coat, a dress or a nicer top and pants. You'll also want comfortable walking shoes for touring, as many towns have cobblestone streets. Women won't need heels.

My viking Trip To Russia

Advise to other people, if you have not done the river cruise, please do it in the near future and do it with Viking cruise.Read More
54Monching

One of the Best Cruises We've Been on

We were so impressed with Viking - their planned tours were fantastic. The ship was exceptionally well maintained.Read More
Edaskland

Viking is a great company to sail with. They look after you very well and here I would like to give Stephanie Hotel Manager a big Kudos for the outstanding job she is doing.Read More
MARGALIT