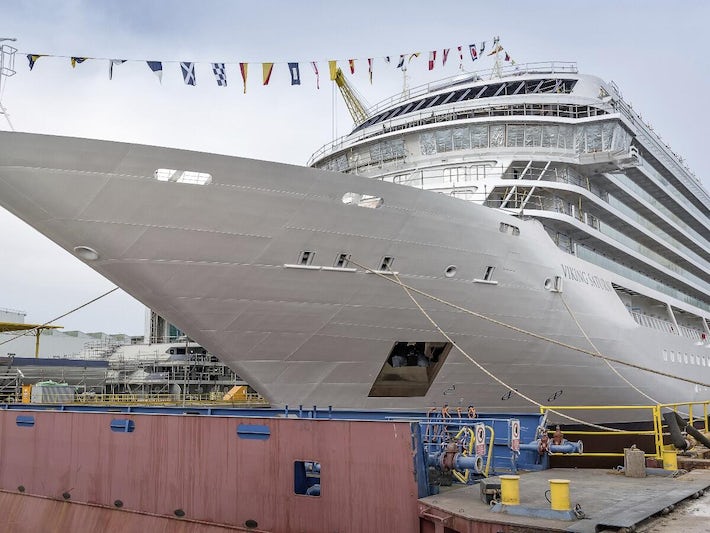 Slated to debut in early 2023, the 930-passenger Viking Saturn will follow in the wake of its 2022 counterparts -- Viking Mars and Viking Neptune -- and become the ninth ship to join Viking Cruises' oceangoing fleet. The adult-only vessel will be near identical to its predecessors, with chic Scandinavian design and a sophisticated grown-up feel.

Don't expect music-pumping nightclubs or flashy casinos as Viking is all about a more cultured style of cruising, reflected in everything from the daily program to evening entertainment.

Viking Saturn will have 465 all-balcony cabins available in five categories, starting from 270-square-foot Veranda Staterooms to the top-end Owner's Suite which has its own sauna. All cabins will be decorated in muted and tasteful tones and, aside from size, the main differences are the perks that go with each category. The three suite options at the Penthouse Junior Suites, which measure 405 square feet, Explorer Suites, which range in size from 757 to 1,163 square feet, and the expansive Owner's Suite which is 1,448 square feet.

All suite-class passengers get speedy embarkation and priority cabin access, the first opportunity to reserve shore excursions up to 107 days prior to departure and priority spa bookings up to 100 days prior to departure, depending on suite type. They also have a mini-bar with alcoholic beverages, sodas, water, and snacks, replenished once daily, separate bedroom and living area, and complimentary laundry service.

The single Owner’s Suite is the most sumptuous accommodation onboard. Perks include a welcome bottle of Veuve Clicquot Champagne, a spacious living room, separate dining area, sauna, and private library, wine and music collections curated by Viking founder Torstein Hagen. Passengers in this suite also get a complimentary shore excursion, valued up to $800, with private car and driver in a port city of their choice.

Lounge spaces are filled with puzzles and books, and activities and entertainment are all about enrichment. Think art lectures, not art auctions. Watercolor painting classes, over waterslides, and traditional afternoon tea in the attractive and airy Wintergarden.
As with sister ships, Viking Saturn will offer a high number of inclusions, including 24-hour room service, a range of shore excursions, gratuities, dining at specialty restaurants, wine, beer, and sodas with lunch and dinner, plus -- and a real boon for spa-lovers -- access to the spa's thermal suite.

Dining venues feature an emphasis on the destinations visited, with The Chef's Table specializing in regional dishes and The Kitchen Table offering a chef's market tour combined with a cooking class and dining experience. The only fee venue onboard, The Kitchen Table is more of an excursion-led foodie experience, than simply a dining venue.

The two largest dining venues are The Restaurant, Viking's equivalent of the main dining room serving breakfast, lunch, and dinner, and the more casual World Cafe, which as the name implies serves cuisine from around the globe in a buffet-style setting.

In addition to The Chef's Table, serving tasting menus with optional for-fee wine pairings, the second speciality restaurant is Manfredi's, serving Italian-themed cuisine. The Pool Grill is the go-to for poolside burgers, fries, and other grill options.

Bars include the Viking Living Room, a central spot for live classical music, the Explorers' Lounge with panoramic views. Torshaven, the ship's jazz club is typically the liveliest spot onboard.

Enrichment takes an educational approach and onboard pastimes are more sedate than what you find on many other lines. Expect talks led by Viking resident historians, expert guest lecturers, cooking classes, wine tastings, and trivia. On a Viking cruise, passengers are encouraged to indulge in the vast onboard library.

There are two pools, a main pool and infinity pool overlooking the aft of the ship, and there's also a sports deck and fitness center.

Viking Saturn Has Spa and Dining Inspired by Nordic Culture

Viking Saturn is being constructed at Italy's Fincantieri shipyard. Even the smallest details on Viking Saturn take their inspiration from the exploratory spirit of the original Vikings, reflecting deeply held Nordic traditions. Light wood grains, touches of slate and teak, Swedish limestone and fragrant juniper appear throughout the public spaces and spa. The Clinker-built design of the Viking Bar mirrors the construction style of the original Viking longships. A Viking Heritage Center provides history and context from the Viking Age, and characters from Norse mythology are subtly incorporated into the design, providing curious passengers with inspiration to further explore Viking's Nordic heritage.

This theme continues in the LivNordic Spa, which is designed with the holistic wellness philosophy of Scandinavia in mind, such as the centuries-old tradition of the sauna to a snow grotto where snowflakes gently descend from the ceiling through chilled air.

Mamsen's is a small food outlet that serves Norwegian deli-style fare inspired by Hagen family recipes. These include open sandwiches and fluffy waffles topped with berries and cream.

When is the Viking Saturn Maiden Voyage?

Viking Saturn is set to launch early 2023 and the exact date of the maiden voyage has yet to be announced.

Viking Saturn will spend its maiden season sailing in Scandinavian and the northern region on three new itineraries for the line. These are two 14-night sailings, 'Iceland & Norway's Arctic Explorer' and 'Iconic Iceland, Greenland & Canada', plus a 28-night 'Greenland, Iceland, Norway & Beyond' voyage that sails from Bergen to New York.

Get Viking Saturn price drops
250,000+ people have entered their email