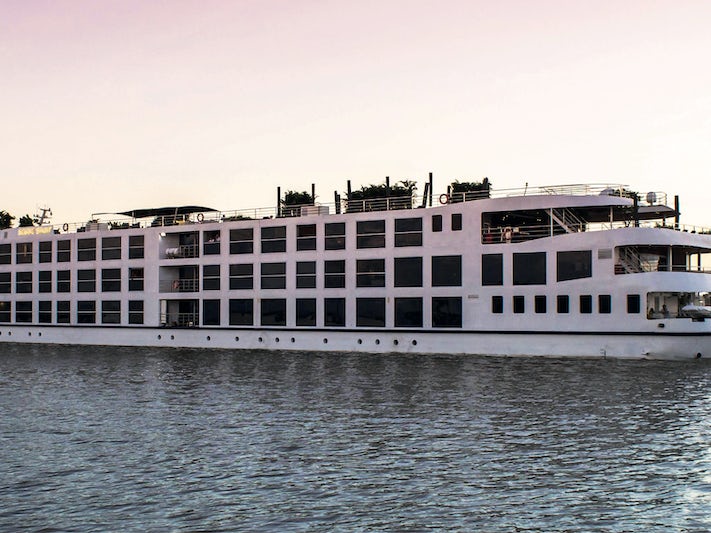 A cruise on Scenic Spirit gives you so many things in one.

Butlers are not proactive and do not anticipate your needs

An elegant, yet utterly comfortable ship sailing a fascinating itinerary

It's luxurious, with Egyptian cotton sheets, L'Occitane toiletries, gourmet dining, all-inclusive beverages, a pool and spa. It's comfortable, with minimalist designs in neutral colors that are never jarring or pretentious, and a bed you sink into at the end of the day for a great night's sleep. It's friendly, with a mostly Cambodian crew that strive to know your name on day one, smile whenever they see you and jest with you at dinner. It's sociable with cruisers interested in mingling and getting to know each other. And it's caring, with crew and fellow cruisers truly concerned about your welfare. Feeling under the weather or overwhelmed by your excursion to the Killing Fields? You're as likely to be offered medicine or a comforting hand from your fellow passengers as you are from the crew.

Built in Vietnam specifically for Mekong River cruising, Scenic Spirit is everything you'd like a river ship to be, especially when you're exploring developing destinations where travel can be challenging. It's got spacious, larger-than-average cabins you're thrilled to come back to after a hot, dusty morning visiting a Cambodian village. It has a pool (and not just a plunge pool at that!) for cooling off in the hot afternoons and a spa with unbelievably affordable massages for working out the kinks after a rickshaw or ox cart ride.

Even with all that said, highlights have to be the dining and the destination-immersive activities including the shore excursions and onboard enrichment.

Meals, including the buffet lunches, were always excellent. The chef uses as much fresh ingredients as he safely can, with fruit and vegetables sourced at local markets a couple of times a sailing. (Meats have to be imported as sanitation standards in Vietnam and Cambodia are not safe for Western travelers.) Wine is free flowing and while we did hear some veteran Scenic cruisers comment about there being less choice than on the European cruises, no one actually complained about the wine being served.

Get Scenic Spirit price drops
250,000+ people have entered their email

The destination side of Scenic Spirit's offerings was also top-notch. We were particularly impressed with the breadth of excursions available. Out of the six full days on the ship, four had excursions in both the morning and afternoon. Four days also offered free choice excursions, giving cruisers plenty of opportunities to choose their own experience. The destination immersion didn't stop when they ship was sailing either. For those interested, you could learn more about Cambodia history, take an Asian cooking class or discover just a few of the supposedly 101 ways to use the traditional Cambodian krama scarf.

A word about service on Scenic Spirit. It's nearly perfect, but not quite there yet, particularly with the line's much-touted butlers. As an all-suite ship, all passengers have access to a butler on a sliding scale of services. But we found the line wasn't proactive about letting us know what we were entitled to receive, nor did our butler go out of his way to tell us. For instance, our big, heavy suitcase was placed in our closet and not on the bed, leaving us to lug it from the closet across the room to the bed. And our walking shoes, which were coated in dust after being out in small villages, were simply moved to a corner of the closet each evening but never wiped down (We did eventually request that our butler clean the shoes for us, but only after consulting with other passengers as to whether that was something we could ask for.)

The passenger mix on Scenic Spirit is dominated by Australians, but you'll also find a sizable contingent of people from the United Kingdom, Canada and the United States. Most are retired, with the average age somewhere in the upper 60s. Everyone is well-traveled, friendly and eager to share stories of past travels.

One thing to note, passengers are not all on the same itinerary, with most on a land/river itinerary of varying lengths; the cruise-only passengers on our sailing numbered less than 20 people. Because the land portion of the trip has typically begun before the cruise, groups have formed by the time the cruise begins, leaving those just on the cruise portion a bit out of the loop. Most people are friendly enough that you'll get to know them during the normal course of the cruise, but table groups might already be in place by the time the cruise begins.

There's not much of a dress code on Scenic Spirit but because the five-star Scenic draws a refined crowd, you won't see any ripped jeans or shorts in the dining room. During the day, casual is the name of the game and it's more important to stay cool than to look good. In the evening, most cruisers resort to smart casual with men wearing slacks and collared shirts and women in slacks or skirts and nice blouses or simple dresses. Even on the Gala Night you won't find too many people dressed up. Men can leave their suits and ties at home (although some had a blazer on Gala Night) and women don't really need a cocktail dress.

There's very little that is not included in your fare when you sail on Scenic Spirit. All shore excursions, nonalcoholic drinks, Wi-Fi and gratuities (both for onboard crew and land-based guides) are included. All alcoholic drinks are complimentary as well, except for five top shelf liquor labels. A DIY laundry room is provided free of charge, along with needed detergent. You'll even receive a free gift during your time in Cambodia -- a lovely scarf called a krama, all of which have been hand woven by a local NGO that provides training for village women from Siem Reap in traditional Cambodian arts and crafts. Just about the only thing you might have on your bill at the end is a spa treatment.

Where does Scenic Spirit sail from?

Where does Scenic Spirit sail to?

How much does it cost to go on Scenic Spirit?

We would highly recommend the Scenic Spirit to everyone. Should be a bucket list item when paired with Angkor Wat!Read More
Andrejs

The Scenic Spirit is such a beautiful boat. The design is spectacular. Local artists’ work adorns the walls.Read More
ljb8689

Spirit Lounge was a good 'end of the day' space. Local entertainment which came on board was interesting and provided good variety.Read More
wjs2000