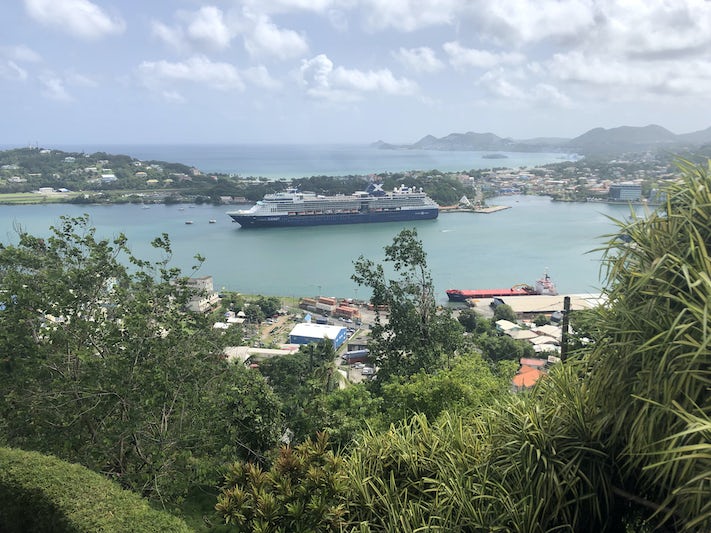 Back to cruising after 15 year absence

Roly22
2-5 Cruises • Age 70s
My wife and I cruised on Chandris Line out of San Juan in the late "80's and loved the experience even though it was very inexpensive and last minute. Food was the best surprise. All else was very good but not enough to get us hooked on cruising. Our next cruise (3-day)was on an older Carnival ship out of FL to Nassau with our 14 year old daughter and her friend in 1996. Quality was lower and ...
Read More

sallylynne
First Time Cruiser • Age 70s
We are a 50-60sh couple who have sailed several times, this was the first time on Celebrity. And it won't be the last time! We can't understand most of the mixed reviews this ship gets. we spent 3 nights prior to cruise at the Hilton Molino Stuckey Hotel. It was very nice, but next time we will choose a place closer in to center of city. Embarkation was smooth & easy, used the luggage tags that ...
Read More

shipshoppers
First Time Cruiser • Age 70s
Since we are diamond RCCL folks, we were looking forward to at least the same type of customer service on a Celebrity ship, but that was not the case. Hardly a day went by that wrong information was given to us by crew members, which caused us great inconvenience.And we were told many times that no one knew answers to our routine questions.No one made an effort to find answers, either. In Venice, ...
Read More

Magic carpet ride on the Summit

Michigan honey
First Time Cruiser • Age 70s
We are a retired couple and love to travel. This was our fourth cruise and our third trip to Europe. We have cruised twice on HAL about 35 years ago and on Sitmar around 38 years ago. We cruised again last year on Princess. This year we were new to Celebrity. Our port of embarkation was Barcelona. We flew from our home in Detroit to JFK and from JFK to Barcelona. We arrived two days early and ...
Read More

Greedy for the Mediterranean

Lynnelynn
First Time Cruiser • Age 50s
We cruised the Mediterranean Legacies itinerary on Celebrity's Summit sailing October 17-30, 2009. With it being our first time in Europe, we were greedy for as many ports of call as possible, and we booked the ship's shore excursions at many of the ports. By the end of the second week, we were exhausted, and WHEN we do this sailing again, will be a bit less adventurous in the ports and may stay ...
Read More

Summit OK, but not summit of cruise ships

Luvsailing
First Time Cruiser • Age 80s
We go on a couple of cruises a year. We've been on the Summit before and previous to this cruise we were on the Constellation. Celebrity is our favorite cruise line. However, this cruise just didn't come up to the standard we had experienced on previous Celebrity cruises. We chalked it up to poor hotel management. Embarkation in Venice: Since part of our luggage stayed behind in Paris and we ...
Read More

SusaninCali
First Time Cruiser • Age 60s
Summit 14-night Classical Mediterranean Barcelona to Venice, Oct 3 to Oct 17, 2009 Concierge Class 9th deck Background: This trip was the first cruise for my husband and I, and I did quite a bit of research on Cruise Critic and elsewhere prior to selecting this itinerary with Celebrity. We selected this particular itinerary for time of year, length, variety of ports, overnights in Rome and ...
Read More

seaworthy1
First Time Cruiser • Age 70s
Started with two nights in Barcelona (Hotel Continental), ended with three nights in Venice(Hotel Ponte Mocenigo). Pre-booked private tours in Villefranche and Naples, Transportation only in Florence and Pisa, DIY in Athens, Istanbul, Split and Venice(with pre-booked excursions in each port) We took a Celebrity tour from Mykonos to Delos. Everything went beautifully except the Celebrity Delos ...
Read More

Many disappointments compared to same ship 2 years ago

wavefanz
First Time Cruiser • Age 70s
Many areas were noticeably downgraded. For example, many of the signage on the buffet items were missing, and on many days, the soup remained a mystery and remained untouched by many that stopped by to look into the unmarked kettle. Chicken fajitas were offered; however, no tortillas were available despite asking day after day. It was not uncommon to see waiters, servers and bartenders couching ...
Read More

Find a Celebrity Summit Cruise from $102