You may also like
Dismiss
Holland America Mariner Society Cruise Loyalty Program
How to Book a Luxury Cruise for Less
10 Ways to Cruise When You're Totally Broke
5 Things You Didn't Know About Booking a Costco Cruise
AARP Cruises: Discounts on Travel for Seniors (and Everyone Else)
8 Reasons to Cruise on a Refurbished Ship
How to Save Money on a Royal Caribbean Cruise
7 Ways for Seniors to Save on a Cruise
9 Best Cruise Lines for Cruise & Stay Packages
How to Book a Suite for Less 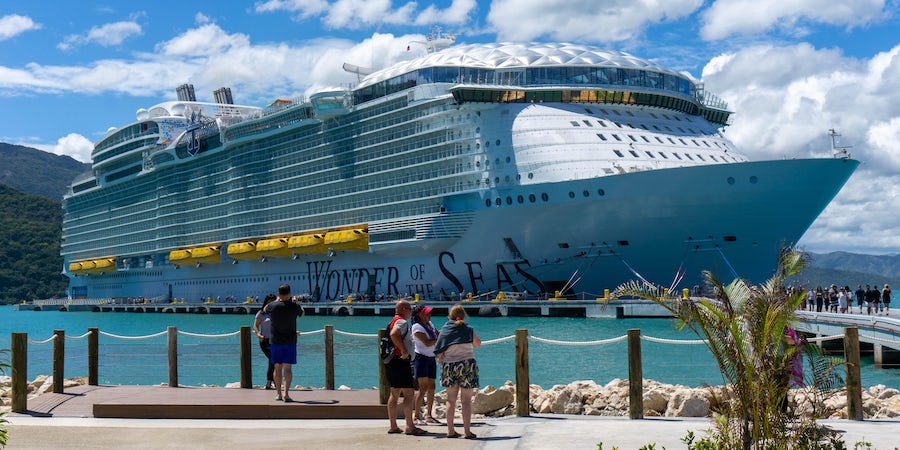 Wonder of the Seas at Labadee, Haiti on March 6, 2022 (Photo: Aaron Saunders)

Throughout the year, you'll find plenty of opportunities to score cruise deals of all kinds. But seasoned cruisers and experts alike know that you'll generally find the best cruise deals from January through March, which is known as wave season.

Wave season is the peak time to snag some of year's best cruise deals. But where did wave season come from? The short answer is that bookings in the post-holiday season were traditionally soft. To combat that, the cruise industry created wave season -- a booking window filled with perks and incentives meant to get travelers of all stripes onto cruise ships and exploring the world by sea.

To help you ride wave season like a pro, we've put together our most powerful tips for finding the best cruise deals from January to March. Inclusions like free airfare to your cruise, deeply discounted drink packages and astonishingly low nightly cruise fares all make wave season your best bet for scoring cheap cruise deals. And if you prefer to snag a deal before wave season kicks off, check out Cruise Critic's deal tool to find all the current offers out there.

Unlike other seasonal sales events tied to specific holidays -- like Black Friday, Cyber Monday or Memorial Day -- wave season is strictly a cruise industry deal. So, you can expect all cruise lines, regardless of size or type, to roll out eye-catching deals during this time. Big lines like Royal Caribbean, Norwegian or Carnival are a given. But the same goes for deals on expedition, luxury and river cruise lines (as well as smaller lines). Wave season covers all cruise types if you're on the hunt for steep discounts and great cruise deals.

Related: How to Find the Best Black Friday and Cyber Monday Cruise Deals

Traditionally, wave season covers the period from January to March, so you'll find the best cruise deals during this time of year. It's not uncommon, however, for cruise lines to start teasing their wave season deals earlier. You'll probably start hearing about deals as early as December, if past years are any indicator. In the wake of COVID-19, it hasn't been uncommon to see wave season cruise deals spring up before the holiday season.

As the year's most significant period of cruise offers, you can expect wave season cruise deals to run the gamut and thrown in most if not all the usual ingredients that make up cruise-related promotions.

Fare discounts are a tried-and-true example of a wave season deal. Celebrity Cruises, for instance, offered passengers up to $1,200 off select voyages during 2022's wave season. UnCruise Adventures made their own splash by offering between $500 to $1,000 off some of their most popular Alaska voyages. Other lines reel you in with onboard perks; Holland America's 2022 wave season offer included include free stateroom upgrades, up to $200 onboard credit per stateroom, up to three shore excursions per person, a Signature Beverage Package, specialty dining packages, and a Wi-Fi package.

Do consider, however, that sometimes the best wave season cruise deals out there come with different restrictions or limitations (expect to see "select cruises or itineraries" repeatedly). Also worth noting: wave season offers, like other deals throughout the year, will typically only apply to new bookings. If you have an existing reservation, you'll likely won't be able to take advantage of most wave season deals, unless you're willing to cancel and rebook.

While there isn't a one-size-fits-all deal that appeals equally to all cruisers, the most attractive offers are always going to be the ones that offer the most bang for your buck. What constitutes good value will largely depend on the cruise as well as your personal preferences.

Related: 6 Cruises That Are Cheaper Than a Weekend in Las Vegas

In the case of the big cruise lines, while discounted fares provide more eye-catching headlines, we find that the best value often comes from onboard perks. Whether it's drink packages, free wi-fi, included shore excursions or that sweet onboard credit, keep an eye out for deals that include these goodies. And if they include two or more of these onboard perks, you've got yourself a nifty deal.

Luxury cruise line deals during wave season are a different animal. Most onboard perks that are considered premium by the big cruise lines are usually complimentary on the high-end lines. As such, you'll want to keep your eyes peeled for offers that include hooks like lower deposits, airfare deals and onboard credits. But arguably the most appealing deal you can find from luxury cruise line is getting suite upgrades, which in some cases can be up to two categories.

How Can I Keep Track of Wave Season Cruise Deals?

Cruise lines aren’t shy about advertising their offers, and wave season deals are no exception. The most direct way to find them is by visiting the websites of the cruise lines of your choice, as the deals will feature prominently on their homepages.