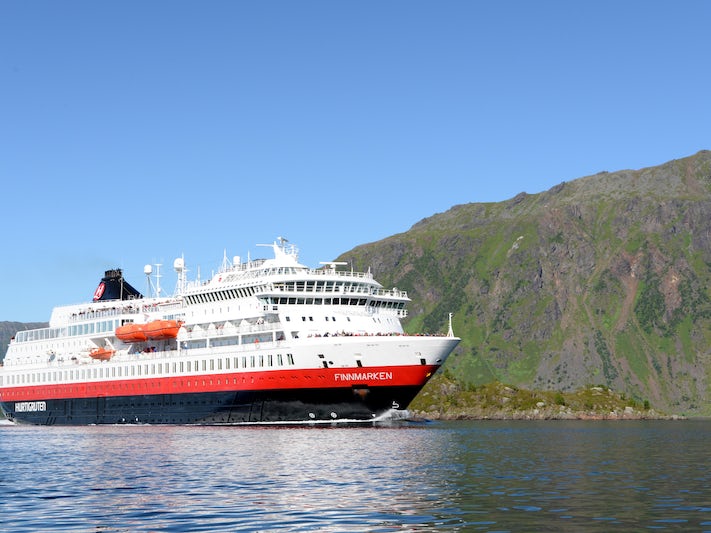 If a cruise along the coast of Norway is on your bucket list, there's no better line to sail with than Hurtigruten. Norwegian to the core, it started out as a line that carried people and freight between various ports in Norway, but it has since evolved into a type of cruising hybrid that an increasing number of Americans find downright intriguing.

Although it's one of just four vessels in the Hurtigruten fleet to be built after the turn of the 21st century, Finnmarken is still a working ship, carrying cruisers, cargo, mail, cars, daytripping backpackers and other passengers who might only be onboard for a couple of days (or hours) as they travel between ports along Norway's coast -- both northbound and southbound. There are constant comings and goings, with several port calls taking place in the dead of night, sometimes for as little as 15 minutes until something (or someone) is brought onboard or offloaded.

You won't find a spa to pamper you, a kids club to keep your children occupied or enough entertainment options to make your head spin. (In fact, there are no entertainment options at all.) But a sailing on Finnmarken will leave you feeling like you've explored a fair portion of Norway in elegant surroundings, at a reasonable price, without exhausting yourself. (After all, what's the point of needing a vacation after your vacation?) Food onboard is excellent -- even if the offerings are limited and somewhat repetitive -- and the line's new Coastal Kitchen menu provides a great way to get a taste of fresh, local fare.

You'll pay a hefty sum for a cruise on Finnmarken, and you'll receive fewer onboard bells and whistles for the price. But, overall, the cost is nothing compared to what you'd pay for a land-based stay in Norway, which is one of the priciest countries to visit. If it's a peek at breathtaking scenery you're after, you'll get it in spades, along with exciting cuisine, elegant accommodations and a friendly environment where nearly everyone speaks English.

The passenger mix is an international one, with the largest contingent hailing from Germany, followed by Scandinavia, the Netherlands, the U.K., America, France and Japan. The overall makeup varies by season, however. Because of the cost of cruising with Hurtigruten, passengers are generally affluent, and they fall within the 50-and-older age bracket. We also saw several multigenerational family groups onboard; we found that generally, they were English-speakers with Norwegian roots.

The dress code is casual. There are no sea days on Finnmarken's itinerary, which means much time is spent ashore. Because the weather in Norway can be fickle, even from port to port on the same day, it's best to dress in comfortable layers that make it easy to adjust to varying temperatures and conditions. During the day, that means jeans or other outdoor-appropriate pants or shorts with basic shirts layered under sweatshirts and some sort of outerwear (fleece, windbreaker, etc.). It's also helpful to pack an umbrella or poncho in case of rain, and bring at least one pair of sturdy shoes for exploring in port or going on shore excursions.

At night, many passengers opt to stay in the same clothes they wore ashore, which is perfectly acceptable, even in the dining room. More common, however, are dress pants (rather than jeans) and slightly more dressy shirts, with or without blazers. We didn't see a single person dressed to the nines, though, so definitely leave your formalwear at home if you don't want to feel out of place. (There are no formal nights onboard.)

Lunch and dinner were served (no buffet due to Covid), the choice was meet, fish or vegetarian.The ship was extraordinarily strong and we felt safe all the time.Read More
SerenadeUK

My advice would be to take a starboard cabin as the ship always docks (34 times during an 11 night journey) and people, goods and cars join the ship from the port side.In the 10 nights we were on board the ship, our room was never vacuumed, The room itself was functional, we had an Arctic Superior cabin, but we definitely did not want to spend a great deal of time in it.Read More
newmexone

Excellent BUT this needs to be dealt with

I have just returned from the round trip on Finnmarken. Hurtigruten provides an excellent voyage and some stunning scenery. Much has been said about the trips so I will not add to the many reviews.Read More
silvercruiser1952

Lovely trip in the winter to the far north of Norway

Drinks were very expensive - as we expected - but it would have been nice to have complimentary tea and coffee available in the lounge areas other than after dinner.I think we will have to go back in the summer though to see some of the views as with only an hour or even less of daylight I think we missed quite a bit.Read More
Lazer207