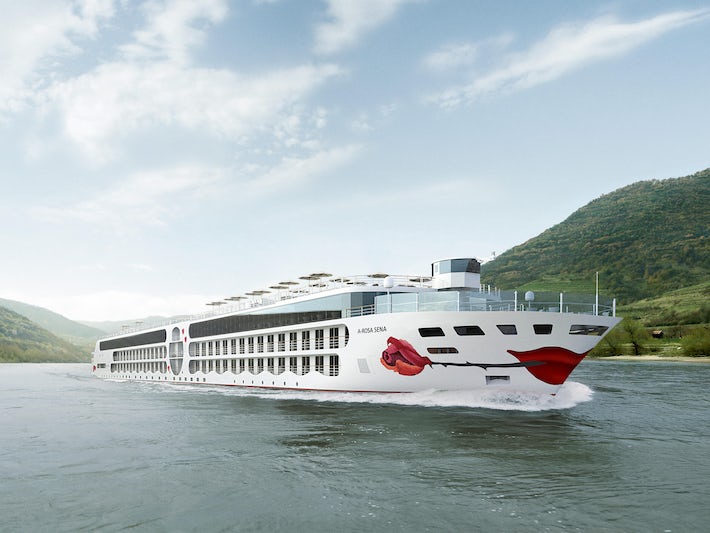 A-ROSA River Cruises' 280-passenger A-ROSA Sena, which is the largest in the German-owned fleet, is a one-of-a-kind vessel bringing a number of firsts to river cruising.

It will be the first ever river ship dedicated to families and multigenerational group,s as well as showcasing pioneering green technology that combines a diesel engine and separate battery-powered motor. The line, which offers English-speaking sailings to an international market, recently announced that all of its ships will have this hybrid technology retro-fitted by 2030.

A-ROSA Sena also has four passenger decks -- instead of the usual three found on most river vessels -- plus a sun deck.

A-ROSA Sena also features a larger-than-average number of dining and bar options for a river vessel, plus all meals -- with the exception of the specialty restaurant -- and drinks are included in the fare.

A-ROSA Market is the main restaurant with large self-service buffets and live cooking stations featuring familiar foods and a range of dishes from the regions visited. Aiming to make mealtimes as stress-free as possible, a special buffet will be available for younger children and there is also a separate family seating area in the restaurant. The Pavilion is an area within the Market Restaurant where, in a first for A-ROSA, passengers can have dishes from the buffet served to their table by waitstaff.

The Riverside is an outdoor eating area, situated at the stern of the ship, where passengers can fetch items from the main buffet. The Sena Grill is a specialty a la carte restaurant serving steak and seafood that will be available to all passengers for a small surcharge.

As part of the line's sustainability mission, all products will be sourced from Europe and fresh fruit and vegetables will come directly from the Rhine region and be delivered to the ship twice per cruise.

The main Sena Bar is located in the lounge, with the adjoining outside Captain’s View outdoor seating area overlooking the front of the ship. The Up & Down Bar is on the sun deck and so-called because, like the ship's wheelhouse, it can be lowered to fit beneath bridges when water levels are high. The Winery is an area for small events and onboard functions, and can be used by passengers celebrating a birthday or special event with friends and family.

There will also be the Treasure Island kids club onboard, another first for river cruising.

Other facilities include two swimming pools on the sun deck -- one a dedicated kids' pool -- and, also unusual for a river ship, a large spa with a sauna, whirlpool, ice grotto, heat bench, relaxation room, treatment rooms and fitness area.

Unlike many river cruise lines, A-ROSA does not include shore excursions in the fare (unless offered by a tour operator as part of a special package). This means passengers can do as much or as little as they want. Shore tours are offered in every port and on A-ROSA Sena these will include family trips, available to book onboard, such as an excursion to the Madurodam miniature park in the Netherlands and Chocolate Nation in Antwerp.

A-ROSA Sena Will be Equipped With Ground-breaking Rivership Technology

Constructed at the Concordia Damen shipyard near Rotterdam, A-ROSA Sena is the first-ever hybrid 'E-motion' river vessel combining a diesel engine and electric battery-powered motor -- a concept found on some new ocean ships -- and is also the first European river ship to generate electricity from exhaust heat. The technological features, developed in partnership with the shipyard, will enable to A-ROSA Sena to sail emission-free and almost silently in and out of ports.

A key element of this system is the ability to store any extra energy generated by the diesel engine in the batteries and call up on it when needed. This process is known as 'peak shaving' which enables the engine to runs as efficiently as possible. The aerodynamic hull -- which sports the line's trademark red lips -- has been also been designed to reduce friction in the water and reduce energy consumption. While docked, A-ROSA Sena will connect to shore power to further boost the battery charge. Other high-tech features include an onboard waste water treatment purification system.

In common with other ships in the fleet, disposable plastic is avoided wherever possible including the cabins, bar, restaurants and spa where all single-use plastics have been removed or replaced by sustainable alternatives.

Want to be Onboard First? A-ROSA Sena's Maiden Voyage is May 2022

A-ROSA Sena Itineraries Will Focus on the Rhine

During its maiden season A-ROSA Sena will sail on seven-night round-trip Cologne cruises along the Rhine visiting Amsterdam, Rotterdam, Dordrecht and Antwerp.