You may also like
Dismiss
5 Best Disney Dream Cruise Tips
A Disney Cruise for Adults: 9 Things to Know When You Cruise Without Kids
Carnival Breeze vs. Magic vs. Dream
Best Cruise Ship Activities for a Class Reunion Cruise
Disney Cruise vs. Carnival Cruise
What Is the Carnival Fun Times?
6 Fun Duct Tape Rolls You Absolutely Need for Your Next Cruise
15 Things You'll Regret Not Doing on a Cruise
Princess Cruises' Shark Week
5 Free Things to do on Carnival Splendor 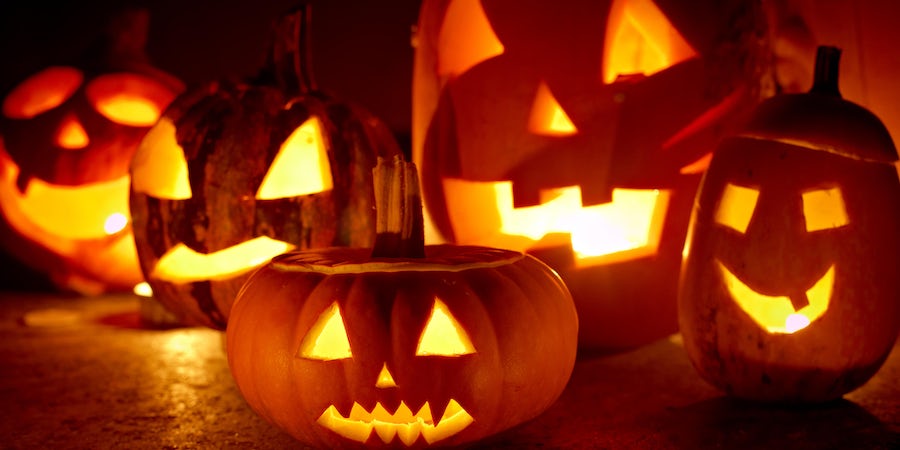 Halloween Cruises: Thrills and Chills for All Ages

Celebrating holidays aboard a cruise ship can double your vacation fun, yet few high seas celebrations conjure as many howls of delight as Halloween. For many mainstream lines, Halloween cruises are big, splashy events featuring costumed passengers and festivities galore.

For most lines, the Halloween spirit is alive as soon as you board your decorated ship, while the biggest themed events typically swing into action immediately after dinner. Maximize your party time (and dinner fun) by dining in character. Regardless of the line, it's perfectly fine to cruise sans costume, but Halloween on the high seas is one of those screamingly fun holidays best enjoyed as your alter ego, be it Batman, Wonder Woman or Taylor Swift's evil twin sister.

But be aware: TSA notes that replica weapons are prohibited from carry-on bags, so make sure to stow them in your checked luggage. Anything even resembling explosives, even if cartoon-cheesy, is forbidden altogether.

Want to get your witch on? Pack your broom, grab your hat and book one of these Halloween cruises.

While every line profiled observes Halloween in the Americas, you'll want to double-check regarding cruises elsewhere, which might or might not offer festivities. Many of these lines observe Halloween only on the evening of October 31; Carnival, Disney and MSC Cruises celebrate on multiple dates.

A top choice for celebrating Halloween on the high seas, Carnival's Frightfully Fun Halloween activities span the entire month of October. Highlights of its Frightfully Fun programming include costume contests, trick-or-treating, pumpkin-carving contests, and special Halloween versions of some of the line's most popular activities, such as deck parties, trivia, Dive-In Movies on the ship's poolside LED screen, arts and crafts, and bingo. Also part of the line's festivities is a pumpkin patch, which takes over each ship's atrium with "Patch, the Pumpkin Pirate" standing guard throughout the cruise.

Thrills and chills fill the air as costumed adults on Celebrity ships blow off steam at a Halloween-themed Silent Disco Party, during which Halloween music will play on one channel and passengers can listen in on headphones. The event will also feature spooky decor and themed drinks.

There will be a costume contest with multiple categories for winners, while family-friendly Halloween movies, including "Beetlejuice," "Ghostbusters," "Hocus Pocus," "Frankenstein" and "Casper," will be shown in onboard theaters and on televisions.

Kids can safely trick-or-treat onboard, stopping at Guest Services and other stations where staff dispense sweets. Other youth activities include a popular kids' costume parade and Halloween-themed arts and crafts.

Kids enjoy Mickey's Mouse-querade Party with dancing and characters in costume; "Hocus Pocus" movie at the Walt Disney Theater; scary movie nights at the poolside theater; spooky storytelling; trick-or-treating; Disney characters dressed in their own costumes; live Halloween-themed music in the ships' atriums; special treats like chocolate spider cake and Spooky Juice in the dining venues (or for purchase at Vanellope's Sweets & Treats shop); and mask-making.

Grown-ups also indulge in their own after-hours party, with a costume contest and dance party in the exclusive, adults-only entertainment district.

Chef Rudi Sodamin's cuisine features "pumpkin-centric" magic from the kitchen, while special cocktails are served such as the Vampire Martini and Midnight Pumpkin Cocktail. There will also be pumpkin-carving demonstrations and a Halloween-themed night in the casinos.

Worldwide, Holland America stages Halloween-ready excursions, including Mysteries of Palermo, Italian Countryside & Catacombs, The Ghosts of Old Quebec and the Ghosts & Goodtime Girls (Skagway, Alaska). Many of these tours are offered throughout the cruises' regional seasons, not just on Halloween cruises.

On MSC Cruises, celebrations take place between October 10 and November 2. Activities will be offered on every ship and include a costume selfie contest, Halloween makeup session, themed karaoke, a Halloween family game show and a spooky dance lesson. Among other kid-friendly happenings will be Halloween-themed family trivia, costumed entertainers, a costume contest and parade, dance parties, and Scary House, a kid-friendly haunted house night in the children's area.

The line also created a special film called "Halloween on Board," which will be broadcast in the theater. There will also be a kids' screenplay contest, in which participants can submit an idea for a Halloween-themed episode for MSC's own web series.

Additionally, one bar on each ship features a Halloween theme (the chosen bar varies by ship), and Halloween-themed treats are served in the buffet.

Halloween on Princess ships will find hundreds of costumed passengers and party-hearty crew rocking the casbah on "Fright Night," an all-ages party held on Halloween night. Additional Halloween cruise highlights include pumpkin carving in the Princess Piazza, decorated public spaces and family-friendly scary movie nights on the Movies Under the Stars big poolside screen. Young ghosts and goblins will get to trick-or-treat around the ship; there also will be a costume parade and scavenger hunt for all ages.

Royal Caribbean ships put on haunted houses or Halloween-themed carnivals (offerings vary by ship), and welcome costumes for both kids and adults. Kids' club staffers will bring the wee revelers trick-or-treating around the ship, while adults will find plenty of thrills, including their own costume party and contest.