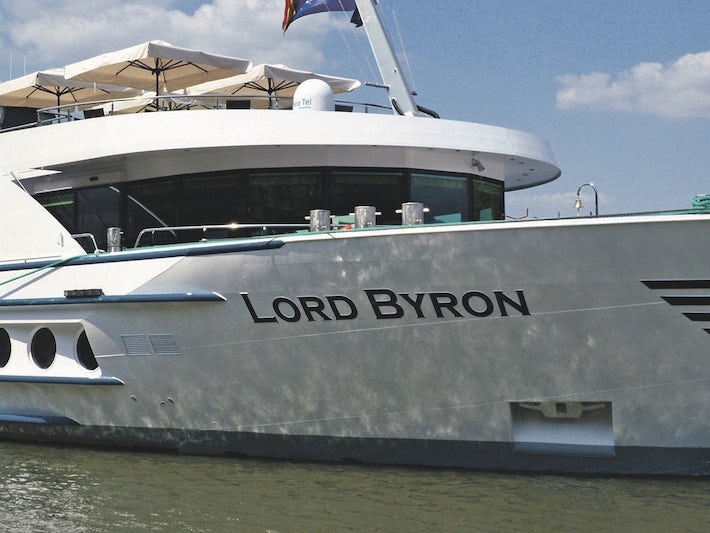 Based in France, the 140-passenger Lord Byron offers high levels of service with a 4:1 passenger-to-crew ratio, much higher than ships of a similar size that carry more people.

Launched in 2013, the boat is one of U.K.-based Riviera Travel's "five-star" vessels built by the company's Swiss partner Scylla AG. The stylish ship has a marble-floored lobby leading to public rooms featuring tropical hardwoods, wrought iron, highly polished copper and brass, along with soft leather furnishings and imaginative color schemes.

Standard cabins, located on the lower Emerald, middle Ruby and upper Diamond Deck, measure 161 square feet. The cabins on the lower deck have fixed windows and the ones situated on the middle deck have floor-to-ceiling French balcony windows, which open. Seven Superior Suites are located across all three passenger decks -- one on the lower deck, two on the middle deck and four on the upper deck -- which measure 199 square feet, with the extra space devoted to a larger living area. Additionally, there are four Deluxe Suites on the upper deck that measure 242 square feet. All suite categories have French balconies with panoramic windows.

The main restaurant, which has tinted panoramic windows, is situated on the Ruby Deck. It serves a buffet breakfast -- with items such as omelettes prepared to order -- a buffet lunch and a four-course served evening meal. All meals, included in the fare, are on an open-seating basis, so passengers can choose where they want to sit. Tea, coffee and juices are served with breakfast along with water with lunch and dinner. There is also a complimentary 24-hour self-serve tea and coffee station. All other drinks are extra.

On the Diamond Deck is the Panoramic Lounge & Bar, which is the heart of the ship with a marble-tiled bar, dance floor and choice of leather armchairs and soft modern settees. The Lido Bar, on the same deck at the rear of the ship, is a smaller and quieter second lounge, which also serves early-bird breakfast, light lunch and a speciality dinner (the latter can be reserved onboard at no extra cost).

Other facilities include a spa, with a sauna and steam room, and an onboard hairdresser, which is unusual for riverboats. There is a 24-hour reception desk, gift shop and laundry service is available, at extra charge. An elevator is available between the Ruby Deck and Diamond Deck, while the Sun Deck and Emerald Decks are accessed by a staircase.

Riviera Travel sells cruises in the U.K., U.S. and Australia, and Lord Byron sails on one cruise; the seven-night Burgundy, the River Rhone and Provence itinerary.