You may also like
Dismiss
Can You Cruise for $100 a Day?
The Best Month to Cruise Hawaii
Cruising with Jane McDonald
5 Things You Didn’t Know About South Australia Cruises
The Most Exciting Ship Launches in 2020
New Cruise Ships 2020
Chocolate-Themed Cruises: Who Offers Them and Where Do They Go?
The 10 Most Popular Episodes of “Cruising with Jane McDonald”
Your Favorite Cruise Ship is For Sale? Here's Why You Shouldn't Panic
Which Ships Will Be Cruising From U.K. Ports in 2022? 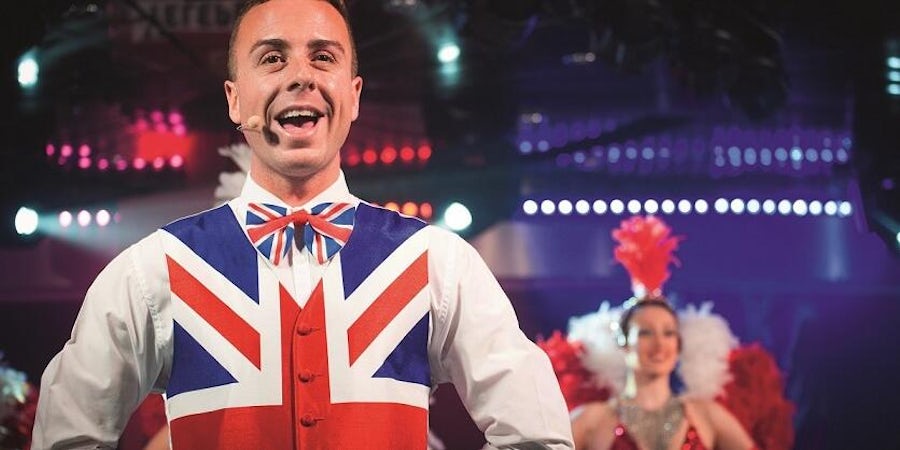 The countdown to The Queen’s Platinum Jubilee weekend is fully underway with the UK set to celebrate 70 years since the accession of Queen Elizabeth II on June 3, 2022, with the traditional Trooping The Colour in London. Street parties, parades and afternoon teas will take place up and down the country to mark the momentous occasion during an extended bank holiday weekend.

UK-based cruise lines are planning their own celebrations, rolling out the bunting, readying Union Jack flags, and preparing delicious Pimm’s, sausage rolls, and finger sandwiches for special onboard commemorative events.

(And if you still can't find wht you're looking for check out these Last Minute Deals).

What’s happening onboard? The first new cruise line to launch in 12 years, Ambassador Cruise Line is currently operating a ‘Round Britain & Queen’s Platinum Jubilee’ cruise that departed Ambience’s homeport, London Tilbury, on May 26. The voyage is calling at all four countries within the UK, England, Scotland, Wales and Northern Ireland. The voyage calls at destinations including the Isle of Skye, Belfast, Isles of Scilly and Kirkwall. Royal experts and ex-members of the Royal Household are onboard to lead fascinating talks and lectures.

Dickie Arbiter, former press secretary to HM The Queen, Dr Nicola Tallis is an independent historian and researcher and Vanity Fair’s Royal Editor Katie Nicholls are among the guest speakers. A Jubilee Gala dinner will also take place during the sailing.

The Deal: In lieu of onboard celebrations (Azamara doesn’t have ships based in the UK), the line is offering a Queen’s Platinum Jubilee offer of $1,000 credit to be used towards shore excursions on three selected itineraries. The theme of the promotion is retracing the steps of famous royal visits by Queen Elizabeth II during her 70-year reign, including South Africa, Australia and Malta.

What’s happening onboard? On the ship’s 12-night "Best of Scandinavia" cruise, departing Southampton on May 30, passengers can tuck into a quintessentially British afternoon tea and the official Platinum Jubilee pudding, a lemon & swiss roll amaretti trifle. Silhouette will also host a proms concert featuring an orchestra and string duo and a ‘Silhouette Street Party’ with iconic British tunes and a toast from the Captain.

The Deal: In celebration of The Queen’s Platinum Jubilee, Emerald Cruises is offering €250 per cabin of onboard extras for all bookings made and paid for in full on all 2022 Europe river cruises. The additional spending could go towards spa treatments, a DiscoverMORE excursion or drinks on the Sub Deck.

Offer Valid: Bookings must be made by June 9.

What’s happening onboard? Passengers sailing on European Waterways' River Thames-based Magna Carta will get the chance to go on private tours of royal residences, including the former home of Henry VIII, Hampton Court Palace. There's also a visit to theDorney Court, a remarkable Tudor House, and the chance for passengers to visit Windsor Castle and Cliveden Estate. The eight-passenger barge operates six-night, seven-day Thames voyages, showcasing the bucolic English countryside on the route.

What’s happening onboard? Fred. Olsen Cruise Lines is going all-out with its Platinum Jubilee celebrations. Passengers will have the chance to celebrate The Queen’s Platinum Jubilee with activities including Corgi Racing, a royal twist on Fred. Olsen’s popular Dolphin Racing event (real corgis nor real dolphins are used in these events!); Victoria Sponge and Platinum Pudding competitions between the fleet’s expert chefs; a British teatime, themed cooking demonstrations and royal trivia quizzes.

Ships will be adorned with Union Jack bunting and red, white and blue decorations, including Balmoral, which departs Newcastle on June 1, on a five-night ‘Scenic Orkney and Shetland’ cruise and Borealis’ six-night ‘Exploring the Scenic Faroe Islands’ cruise, departing Liverpool on June 3 or Belfast on June 4.

What’s happening onboard? On MSC Cruises' UK-based Virtuosa, passengers can watch all of the Platinum Jubilee celebrations, including Trooping The Colour, the Thanksgiving Service, the Platinum Party at the Palace and the Platinum Pageant. Public spaces will be decorated in a red, white and blue theme. There'll be a children's parade and on a Jubilee brunch gala dinner on Sunday.

What’s happening onboard? Platinum Jubilee celebrations will take place across P&O Cruises' fleet, including a Jubilee afternoon tea, lunch and pageant featuring The Queen’s favourite dishes. Signature Jubilee cocktails will be available including the Garden Party Mojito, Gin Ma’am-tini, Kir Royale and a Royal Jubilee sparkling wine. The popular British cruise line is also drawing on a number of Royal experts to lead talks onboard. Grant Harrold, Royal Butler to Prince Charles, William and Harry is on Iona Hugo Rittson-Thomas, the Royal Photographer is onAzuraand Christian Furr, official painter of the Queen is on Britannia.

To mark the special occasion, P&O Cruises is also offering discounts of between £75 and £250 off cruises and £70pp low deposit per person between September 1, 2022 and December 30, 2023. The offer also includes the removal of regional flight supplements on new Select Price and Early Saver bookings made by September 5, 2022, and is available on fly-cruises to the Caribbean, the Canary Islands and the Mediterranean departing May 31, 2022 to October 4, 2024.

Offer valid: The discounts apply on Early Saver bookings made by July 4, 2022.

What’s happening onboard? Between 2-5 June 2022, a series of activities will take place on Princess Cruises’ four UK-based ships. Passengers can expect live event coverage shown on the ships’ top-deck 300-square-foot Movies Under the Stars screens, including Trooping The Colour, Thanksgiving Service at Westminster Abbey, the Epsom Derby, the Platinum Party at the Palace and the Jubilee Party.

Princess Cruises’ popular Piazzas will be decorated in garlands of banners and buntings in royal colours with passengers encouraged to wear red, white and blue. British-themed food and drinks will be served across the four days, Passengers will dine on Royal Afternoon Tea, which includes favourites such as Victoria sponge cake. Pimms and strawberries will be served on the top deck and a Royal Dinner menu will be available.

In addition, the 3,660-passenger Sky Princess will host a special Royal Variety Show featuring an Elton John tribute performed in the Princess Theatre, plus Royal Trivia in Princess Live!, plus an exciting talk given by guest speaker Grant Harrold, former butler of HRH, Prince of Wales.

Offer Valid: Bookings must be made by June 7.

What’s happening onboard? Viking Cruises intends to celebrate the Queen's Platinum Jubilee with a lineup of special programming on its dedicated TV channel, including an episode about teh Royal Yacht Britannia. Further episodes will be streamed at 7pm each evening, including interviews and visits to royal homes.