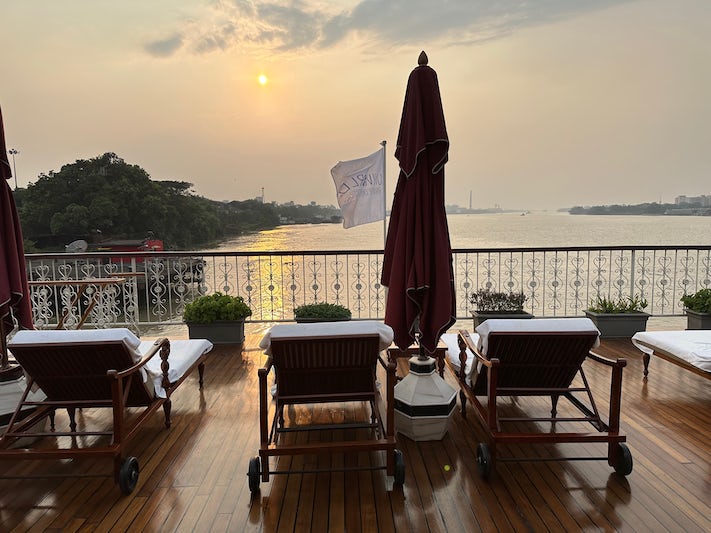 YTM105
6-10 Cruises • Age 70s
A few years after my wife and I had a very positive experience on a Uniworld River Cruise ' we did Amsterdam to Budapest on the Rhine and the Danube on the River Princess in 2008 ' we decided to try it again, this time on Russia's waterways linking Moscow to St. Petersburg. Uniworld has only one ship running this schedule ' the River Victoria ' and you can either choose to go from Moscow to St. ...
Read More

SS Antoinette's Maiden Season is off to a great start!

MassCapeCruiser
2-5 Cruises • Age 70s
We just returned (a few pounds heavier, and heads still spinning) from a fabulous experience on Uniworld's SS Antoinette from Amsterdam to Basel. Each and every crew member was pleasant, gracious, and on a mission to show the guests a great time. The food was fabulous! There were sumptuous breakfast and lunch buffets and multi-course plated dinners with freely flowing wine. The ship is ...
Read More

willcodeforfun
First Time Cruiser • Age 50s
We can't gush enough about the Antoinette and the service we received there. The staff was so helpful and friendly, including accommodating my husband's serious food allergy (the chef even baked my husband a cake for his birthday! first time he's ever been brought a cake and had waiters sing to him in a restaurant -- usually if he's going to have a cake, I have to bake it!). We were very ...
Read More

Battyee
6-10 Cruises • Age 80s
Antoinette was on return leg of her maiden voyage from Basle to Amsterdam, weather was great & although we are seasoned cruisers we had never before considered a short river cruise. Our fellow passengers were mainly from USA & Canada with a few from Ausralia & Sth Africa. We were as far as we know the only Europeans on board. We could hardly have chosen better. Compared to big ships our ...
Read More

Crusin' Cath's Mate
2-5 Cruises • Age 70s
We arrived on December 21st at about 8pm, having been delayed by weather. We were dropped at the curb by our cab, and left to pull our luggage down to the ship, up the gangway, and after finding the entry button, into the lobby. We were surprised to find no sense of security and were unchallenged. Once we made it into the lobby, however, the service was quick and efficient and we were soon in our ...
Read More

WARNING to those requiring internet!!!

venomous viper
10+ Cruises • Age 70s
This is first river cruise, and probably the last! Get to fly home tomorrow! The brochure was very misleading and this has been very frustrating for all aboard. The internet has been "not working" for 95% of the cruise. I've only been able to log on between 3 and 5 A.M each morning. The cruise line has done nothing to help and just given flimsy excuses. It could've offered a 10-15 minute ship to ...
Read More

Enjoyed every minute on a European River Cruise

Ausfern
First Time Cruiser
The company we chose was Uniworld - based on recommendations from friends and some special 'last minute' discounts for cruises starting in September. The 17-day cruise we eventually signed up for was on the "River Princess" from Paris to Vienna, including 2 nights in a hotel in Paris at the start, the coach transfer from Paris to Trier where the 'river' part began, and the 15 nights on the 'boat' ...
Read More

gmk103
First Time Cruiser • Age 70s
We have been on many ocean cruises, but this was our first river cruise and it was truly a remarkable way to travel. We previously visited Europe on land tours which involved lots of packing and unpacking and getting on the bus and off the bus. The river cruise takes all the hassle out of traveling from one locale to another. Uniworld has certainly perfected the art of river cruising by choosing ...
Read More

KCalla
First Time Cruiser
We are home from a very enjoyable first river cruise. Thank you to all of the Cruise Critic Board members whose posts gave us the information we needed to plan our first river cruise. We have cruised ocean going vessels with passenger sizes of 920 to several thousand. I was concerned that a very small ship with limited on board and evening activity options would not suit us. I was wrong. River ...
Read More

peter
First Time Cruiser
Holland at Tulip Time Uniworld Cruise aboard the River Empress May 1- 8, 2005 After taking many traditional cruises, decided to explore Holland about a river cruise ship, the Uniworld River Empress. Although quite different than typical cruise ships, it was nonetheless a terrific experience and a great vacation. Approaching the ship in Amsterdam, the first thing that occurred to me is that ...
Read More