You may also like
Dismiss
The Sanctuary on Princess Cruises
Cunard Line's Cunard World Club Cruise Loyalty Program
Cruise Classes: 21 Things You Can Learn on Your Next Cruise
Carnival Journeys Cruises on Carnival Cruise Line
Top 10 Reasons to Cruise with Fred. Olsen Cruise Lines
5 Best Cruise Lines for Easter Cruises
Hurricane Irma: A Look Back At the Storm
Coastal Cruise Tips
Holland America vs. Viking
Your Favorite Cruise Ship is For Sale? Here's Why You Shouldn't Panic 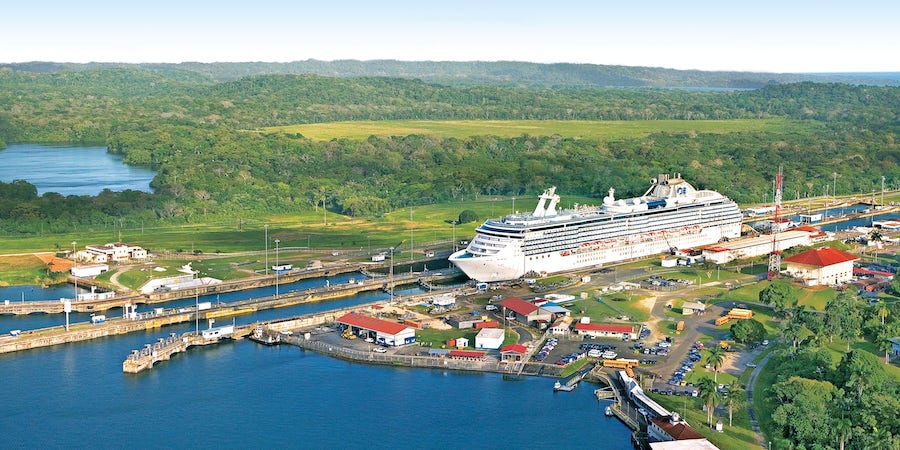 One of the few engineering marvels in the world with its own palindrome, the Panama Canal should be on everyone's list of must-see places. Celebrating its centennial in 2014, this link between two great oceans is as vital and vibrant as ever. It is also one of the greatest testaments to good old-fashioned Yankee ingenuity that the world has ever seen.

Travelers have always made their way across the 50-mile isthmus that connects North and South America, dubbed the "Crossroads of the World." But, until the canal was built, the trans-isthmus trek involved a winding path through jungle rivers. In 1880, the French began a canal-building project that, after twenty years, ended in failure and the death of an estimated 20,000 workers. The U.S. took over in 1903, poured $352 million dollars into the project, and opened the Panama Canal in August of 1914.

Many cruisers consider a Panama Canal transit a bucket-list item, and for a long time, the itineraries drew mostly seniors, due to the length of a full-transit trip (which usually runs 14 days). Partial transits -- where the cruises only go halfway through the locks before turning around -- not only cut the number of days, but increase day-trip options in the Central American cities near the canal. While several ships bring lecturers onboard to talk about the canal's history, this is one trip where a little extra reading might add to your enjoyment. "The Path Between the Seas," by historian David McCullough, comes highly recommended.

The Panama Canal cruise season runs from October to April. The best time to go is after the rainy season ends in November.

Most of the major lines and some smaller ones offer at least a few Panama Canal sailings each season. Princess designed two ships, Island Princess and Coral Princess, to sail the canal; each ship has more than 700 balcony staterooms, and both sail the canal all winter long. The Panama Canal is also a popular repositioning cruise between Alaska and the Caribbean. Expedition ships, such as Lindblad, and tour companies known for river cruises, such as Grand Circle and Tauck, also make the journey.

At one time, Panama Canal cruises followed the same standard itinerary: 14 days from Florida to the West Coast, with stops in the Caribbean, Central America and Mexico. In the past decade, cruise lines have expanded their offerings, eager to lure new passengers to the seas and snag cruisers who may have already traversed the canal once or twice in the past. Current cruise lengths can be anywhere from 7 to 9 days, 10 to 11 days or 14 to 16 days. Several lines, such as Princess, Crystal, Holland America, Seabourn, Regent Seven Seas and Cunard, also offer a few cruises per season in the 18- to 21-day range, and cruises that transit all the way to the Pacific Northwest or Alaska can take up to a month.

Apart from length of sailing, the biggest decision you'll need to make on a Panama Canal cruise is whether to opt for a traditional trans-canal experience or take a partial crossing.

Trans-Canal Crossing: The most popular Panama Canal itinerary is still some version of the standard Florida to West Coast route. Miami and Ft. Lauderdale are the main departure cities in Florida. Los Angeles, San Diego and San Francisco are the key West Coast cities, although longer transits also depart from Seattle or Vancouver.

Passengers often choose an Atlantic to Pacific or Pacific to Atlantic route, depending on where they live, although you'll gain hours if you choose the latter. (Some people prefer to have their longer one-way flight at the beginning of a trip, instead of the end.) With this trans-canal option, you spend a day on the canal, crossing from ocean to ocean and going through the complete lock experience. If having the full "canal experience" is part of your bucket list -- or if you're an engineering geek and don't care too much about shore excursions within Panama itself -- this trip is for you. Most full Panama Canal cruises do call in the Western Caribbean, the Costa Rican ports of Limon (on the Atlantic side) and Puntarenas (on the Pacific), and Cartagena, Colombia. Some also stop in Puerto Quetzal, Guatemala, and western Mexico.

Experience a full crossing with our slideshow, Postcards from a Panama Canal Transit on Celebrity Infinity.

Partial Crossing: On partial crossings, the ship doesn't actually cross the entire canal. Instead, the ship crosses through one lock, then lets passengers off in the town of Gamboa, along the canal. From there, passengers can enjoy a myriad of shore excursions and take in sights they otherwise wouldn't see on a daylong crossing. For those who still want to see the full canal, including Gaillard Cut, the Centennial Bridge and the Bridge of the Americas, excursions are available that will take you out in a smaller boat. This option is good for cruisers who want a taste of the canal, but who also want to see part of Panama, as most partial transit itineraries also stop at Colon. Because most partial transit cruises leave from Florida, other ports usually include islands in the Southern or Western Caribbean and Cartagena, Colombia.

Faux Crossing: Some lines offer the same "partial crossing" shore excursions without entering the canal at all; instead, ships dock for a day at the Caribbean entrance to the canal, at Colon, Panama. Look for Caribbean or Central America itineraries that call on Colon, and check the shore excursion offerings closely.

Puntarenas, Costa Rica. There are so many fabulous encounters with nature available from this port, you'll have a hard time deciding on a shore excursion. A visit to the Tabacon Resort Hot Springs takes you to the slopes of the active Arenal volcano. The Poas volcano features the amazing sight of a huge crater filled with iridescent blue water. Walk through a cloud forest at Villa Blanca, where you're surrounded by mist and water droplets clinging to the vegetation. See one of Costa Rica's renowned rain forests at Pura Vida Gardens, or climb a set of wooden steps up to the La Paz Waterfall Gardens.

Panama Canal. If you're on a trans-canal trip, enjoy the engineering marvels of your 50-mile journey. The highlights are Lake Gatun, the Gaillard Cut along the Continental Divide and three locks: Gatun on the Atlantic, Pedro Miguel and Miraflores on the Pacific.

Colon, Panama. Those on "partial crossings" or simply docked at Colon might consider completing the crossing in a smaller boat. This popular shore excursion begins at Gamboa, one of the towns along the Canal. It takes passengers through the remaining two Canal locks, all the way to the Pacific Ocean. A motorcoach ride delivers passengers back to their waiting ships at Colon.

Other great shore excursion options include taking the refurbished Panama Railway from the Pacific to the Atlantic. It rides parallel to the Canal and offers a great view in luxuriously paneled railway cars. Another exciting alternative is to take a trek through the rain forest at Gamboa, or visit an authentic Embera Indian Village on the Chagres River (which often takes place by canoe).

Puerto Quetzal, Guatemala. This port on the western coast of Guatemala provides access to the colonial city of Antigua, which has earned status as a UNESCO World Heritage Site for its architecture and ruins. The port provides a jumping-off point for tours of working coffee plantations, the Pacaya Volcano (one of the country's many active mountains) and Lake Atitlan.

Puerto Limon, Costa Rica. Tortuguero National Park offers close encounters with the green tortoise, crocodiles, monkeys and exotic birds, all seen at water level on the canals. Braulio Carillo National Park has the first aerial tramway in Central America; you'll be above the trees, at times 100 feet high, and close enough to touch tiny orchids, spectacularly colored birds, butterflies and, if you're lucky, a toucan or monkey. Heartier souls can try white-water rafting on the Revantazon River.

Panama Canal cruises often include stops in western Mexico, the Western Caribbean and Southern Caribbean. Read more about these ports in our destinations section.

Get up early. On the day of the transit, prime viewing locations on the bow and near windows go quickly. Most cruise lines do their best to give everyone a decent seat -- sometimes opening up "crew only" areas -- but competition can still get fierce. So set your alarm; the sooner you can pull yourself out of bed, the better the spot you'll snag.

Get your sunscreen on. Despite the early start, you'll want to be prepared for the Panama sun, as it can get surprisingly hot while you're out there waiting. Some ships will do their best to make passengers comfortable, offering chilled towels and water, juice and Panama rolls (Danish-like pastries with sweet fruit filling in the center) for a small breakfast alfresco.

Get out of your cabin. This is one situation where a balcony cabin offers a unique perspective, but it isn't really a necessity (unlike on an Alaska or Hawaii itinerary, where you're guaranteed gorgeous scenery on either side of your ship). Bigger ships can only squeak through the canal, with two feet (or less) on either side. While the railing of the balcony can give you a better appreciation for just how tight that squeeze is, being up on the bow is the best way to appreciate the full scope of the process.

Consider shore excursions over independent touring. Many Panama Canal and Central America ports are relatively industrial, and some -- particularly Colon and Puerto Limon -- have a reputation for petty crime within the main city. You will likely be safer on a shore excursion, booked through the ship or independently, than if you decide to head on your own into town. If you're not a fan of tours, know that in Colon, city officials have regulated taxis and provided good shopping and cafe facilities at the two main cruise ship docking areas, Colon 2000 and nearby Cristobal Pier.