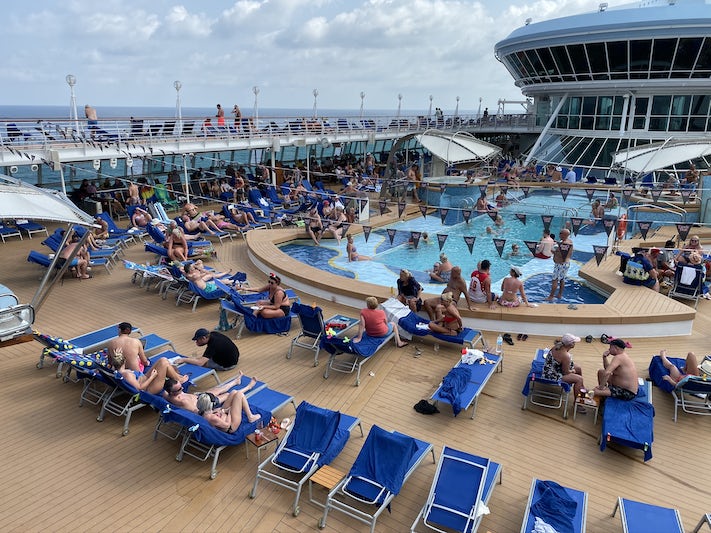 Kau
10+ Cruises • Age 60s
The destinations were very good despite the rain. We had never been to the Carribean before so did not know what to expect. Excursions organised by the ship were ok if pricey. Entertainment and food were ok but a bit repetitive (3 of the 5 shows were the same as experienced eighteen months earlier). Remember to take an umbrella or lightweight waterproof as you may well get the full rain forest ...
Read More

Tex mex ducks
2-5 Cruises • Age 50s
We chose this cruise for our honeymoon and were not disappointed. The ship was well appointed and in good condition throughout. Everywhere was immaculate and the cleaning was very thorough. We had a balcony cabin in deck 6. Not massive but adequate with plenty of storage and hanging space. The bathroom was compact like most are and functional. The cabin was well soundproof and the air con ...
Read More

WE HAD THE BEST TIME!

maria01
First Time Cruiser • Age 50s
Just got back from 2 weeks aboard the Marella Discovery and we had the best time! On first impressions the ship was excellent with a impressive atrium, glass lifts and classy bars. It was well organised and check in went smoothly. When we first embarked the staff were available on every floor for help if we needed it. Our outside cabin was of a good size with a comfortable double bed. We ...
Read More

Fantastic Cruise / Shame about the Weather.

Reebok
10+ Cruises • Age 60s
Price and location were the reason for this our 5th visit to the Caribbean. Food and Beverage were my highlight of this voyage. Entertainment team did a fantastic job with one UK act per week. Cruise Director ' Paul ' excellent on our second week. Bar service excellent all around the Discovery. Special mention for pool bar :Tony, Francis, Gary, Observatory bar : Ivan and Maria also waitress ...
Read More

mogslodge
6-10 Cruises • Age 70s
Despite reservation of our cabin and confirmation of the trip in the previous June, three days before we were due to travel we were advised, without any explanation, that we had been allocated a cabin at the other end of the ship. We later discovered that many of the other passengers found themselves in a similar position. On board the general condition of the ship was poor. Our cabin required ...
Read More

Too much cost cutting

alan dalus
10+ Cruises • Age 70s
Having cruised with several different companies over the last 20 years, we decided to give this ship a try as it was offering two decent itineraries with only 2 sea days, also the A.I. drinks package and a nice cabin for the price we paid seemed appealing. The ship itself was in very nice considering its age, RCCL do look after their ships, and the recent refit carried out by TUI obviously ...
Read More

Two-j
First Time Cruiser • Age 70s
First cruise ever to celebrate a special birthday, it took a lot of persuading and only a back to back Caribbean would do to give it a try. Not everything went as it should. No Dreamliner which Thomson had promoted very heavily for this holiday, that was big disappointment not only to us but also to most travellers from other UK airports. The transfers went very well despite our flight being late. ...
Read More

Northwood
6-10 Cruises • Age 90s
Suitable itinerary Flight from Gatwick to Barbados first class, return somewhat spoilt by a delay of 3 hours no explanation given . Ship on the whole good but so noisy, wherever you went music of some kind was blaring While on this subject was very dissapointed with the show the lead female singer just shouted ! The. Parisian item was terrible almost as tho they were reading dialogue ...
Read More

One week not enough

malbak
First Time Cruiser • Age 70s
Very enjoyable first cruise, having read some poor reviews we were pleasantly surprised. The whole experience was well organised and painless with all the ships staff keen to offer help if needed. Only one or two children on board so the ship was quiet and no annoyed parents. Some reviewers have complained about ill dressed people drinking beer at all hours, yes people did drink(what a surprise on ...
Read More

Angeladw
2-5 Cruises • Age 70s
We choose this cruise because we were looking forward to spending time in the sun with great entertainment, service and being on a ship where we would be welcomed and listened to should we have any concerns. I'll start with The positives: We had sun The ship didn't sink Now the negatives: The flight over and back was on 767 not Dreamliner.very date. Films were ancient and sound ...
Read More