You may also like
Dismiss
Don't Move the Tongs: The 10 Commandments of Cruise Ship Buffet Etiquette
Love Vegas? Try a Cruise Next
8 Reasons to Cruise on a Refurbished Ship
23 Things Cruisers Love to Complain About
Royal Caribbean Cruise FAQ
Princess Cruises FAQ
6 Cruise Memories That Will Warm Your Heart
Cruise Critic Members Shout Out a Few of Their Favorite Crew
Why Germ-Zapping Robots and AI Technology Could Be the Future For Cruise Ships
Will I Have to 'Social Distance' on My Next Cruise? 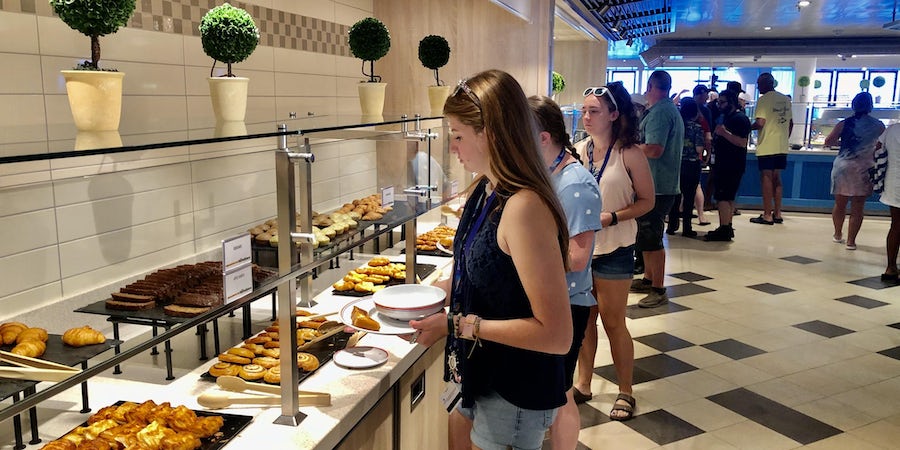 The Self-Serve Cruise Buffet Is Back, On Many Major Mainstream Cruise Lines

When cruising returned post-pandemic in June 2021, the future of the beloved self-serve cruise ship buffet quickly became an unknown. Well, it's now spring 2022 -- and they're back, baby.

Royal Caribbean International is the latest to reintroduce the all-you-can-eat self-serve buffet – following brands such as Carnival, Norwegian and Disney Cruise Line.

For a time, many cruise lines pivoted to a full-service approach, a buffet setup where you could choose what you wanted to eat but your choices were served up by crew. The idea was to limit COVID-19 spread by having fewer people touch the same objects. The approach was in line with recommendations from the U.S. Centers for Disease Control and Prevention (CDC) at the time.

Now that the pandemic has waned, and the CDC has loosened restrictions, serving yourself is again an option. The thing is, not all cruisers are happy about that.

Royal Caribbean has returned to self-service in its Windjammer buffets, as of April 1. At the same time, the line will continue offering packaged grab-and-go items that proved popular post-pandemic. Self-service has also been restored at Royal's Solarium Bistros and private island destinations, such as Perfect Day at CocoCay.

NCL Has Been Back in Buffet Action

Norwegian Cruise Line began bringing back buffets starting with select sailings over summer 2021. The line said at the time, it was continuing to work with destination partners to adhere to local and international requirements, but had been able to bring back self-service buffets on several ships.

It's Help Yourself On Disney Again

Last summer, as Disney Cruise Line returned to service, buffet areas were switched from self-service to crew-served. As of April 1, Disney was moving back to self-service on all ships.

Like many of the cruise lines listed here, MSC Cruises returned to a self-serve buffet on April 1.

Even before its ships restarted last summer, Carnival Cruise Lines announced they would be offering self-serve buffets on all of its rebooted cruises. Carnival's stance followed those of some resorts in Las Vegas, such as The Cosmopolitan and MGM Grand, that brought back their famous self-serve buffets back in June 2021.

Even premium lines, such as Viking, are getting back to normal. Cruise Critic Editor in Chief Colleen McDaniel reports that the buffet on Viking Octantis, the line's new expedition ship, is self serve.

On the Cruise Critic message boards, a surprising number of cruisers voiced their disappointment at the change to back to self-serve.

When Norwegian began to revert to pre-pandemic operations for its buffets, some cruisers expressed unease at leaving buffet safety in the hands of fellow passengers. "I've seen how well THAT has work in the past," said hallux. "Hopefully they have someone there actually focing people to wash their hands."

Royal Caribbean fans reacted in a similar manner. "Sorry to learn about this," wrote Janet524, of the move back to self service. "It was nice not having to deal with people hovering over food and hundreds of hands (in various stages of cleanliness) touching serving utensils."

"I guess I won't get too upset over this. I have been on 4 cruises in the last 2 months being served by crew members, and I really prefer that style of buffet," wrote pcur, adding that Holland America Line has been doing full-service buffets "for a very long time." Added pcur, "So, I'll go back to handling the serving utensils and using hand sanitizer when I sit down to eat."

"I liked being served at the buffet but I also saw how unsustainable it is on my most recent cruise," said Jasukkie. "They just do not have the staff. One crew member trying to serve both lines on a service island by themselves is miserable for everyone."

Wineaux007 opined that cruisers have options for dealing with potential spread of germs. "You can purchase throwaway plastic gloves for use at touching utensils at the buffet. I've seen them at several buffets. If you are concerned, purchase some and bring them with you."

Ocean Boy took a practical approach: "Hopefully, people not liking the return to self serve in the Windjammer will help to keep the crowds down in there for those of us who don't mind."

On a Celebrity Cruises thread there was hope expressed that that line does not follow its sister line, Royal, in going back to self-serve buffets.

"Staff serving at the buffet is a huge improvement for many reasons in addition to health reasons," said TeeRick. "I am on a cruise so it is OK for the staff to put items in my plate. More refined. I don't worry about what previous guests did to that food selection before I got there. Make it permanent!"

"Just got off Apex yesterday and the crew is still serving," said Judla. "I really liked as no one was picking up food and the putting it back."

Judla added that crew will "give you more if you want."