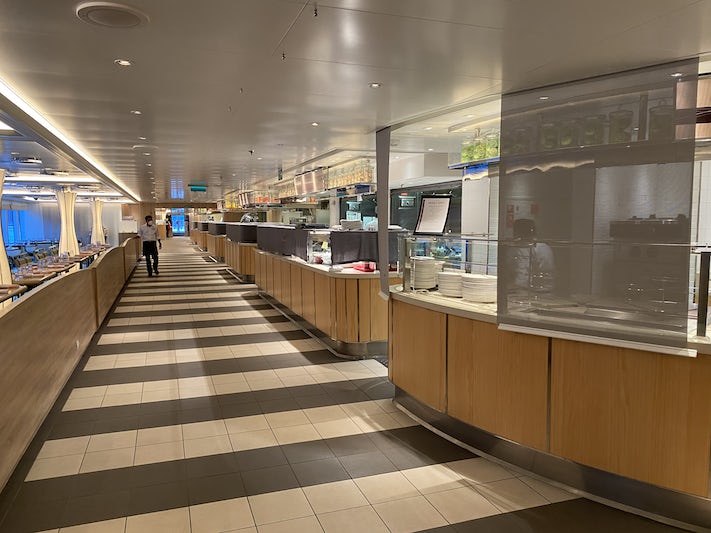 HappyHippies
6-10 Cruises • Age 50s
Absolutely fantastic!! We love HAL. Everything was exceptional - organized embarkation was very fast, ports of call were great, service was exceptional, all activities and meals were all fantastic, and we can't say enough great things about the exceptional staff. Can't think of enough stellar words to describe all the great things about HAL. Just booked our next cruise on HAL!! The staff on ...
Read More

Review for Volendam to British Columbia

AirAbel
10+ Cruises • Age 70s
The land tour (8 days with HAL) was awesome and exceeded our expectations, Anchorage/Denali/Fairbanks/Dawson City/ whitehorse/ Skagway but the sea part to Vancouver was not fun. I would not cruise with HAL on their ships again. 1. Indonesian and Filipino staff have poor English comprehension - a big problem in the case of an emergency (Costa Concordia). They try hard, but lack English ...
Read More

dtgnf
First Time Cruiser • Age 60s
Wonderful re-positioning cruise from Vancouver to San Diego, stopping at San Fran and Catalina Island. First cruise for me, although my traveling companion had made several cruises on HAL with her late mother. Best thing overall was that we were extremely lucky with the weather. Sail out day from Vancouver was glorious, had a bit of rain overnight but the rest of the trip was incredible. Thanks ...
Read More

TravelGirlinDallas
2-5 Cruises • Age 40s
We chose this one-night cruise on the Westerdam in order to get from Seattle to Vancouver to board a longer cruise the next day. It was a fantastic experience. I had read some negative things about one-night cruises before, but none of that applied here. The staff was friendly and attentive, the food was excellent, the ship was elegant and pristinely clean. The only unexpected thing was that they ...
Read More

Cyndy Sue
6-10 Cruises • Age 60s
As this was our first Holland America cruise, we were very excited to board the Oosterdam in Sydney.Our first disappointment was the atrium area. Normally an area of meeting friends, coffee, drinks and generally a buzz, the Oosterdam's atrium was dull with a bar near the purser's desk which was closed most of the time.With only 7 ports visited on our cruise, three of these were on a Sunday. Two of ...
Read More

Fun one day on the Oosterdam!

lbt43
6-10 Cruises • Age 40s
I love Holland America. Embarkation - I rate this a C. Honestly, I felt they got us on the ship late, (12:00p) and it was really disorganized. No one knew the boarding was numbered and everyone rushed up to try and get in. The lady who was organizing it was doing her best and keeping everyone informed, but it seemed like it could have been done a lot better. Once I was on the ship, I ...
Read More

andeesue
6-10 Cruises • Age 70s
I live in San Diego and have dear friends in Victoria, so it seemed like a no-brainer to take advantage of the great price for this short cruise to Vancouver. I also took it as an opportunity to see how I'd fare in the cheapest inside cabin... looking ahead to when I can't find any friends to share and may only be able to afford windowless real estate onboard. As I noticed the prices going down, I ...
Read More

From Pollywogs to Shellbacks

Shellbacks
First Time Cruiser • Age 70s
I had always resisted the thought of cruising, but after doing the cruise with Holland America on the MS Oosterdam it would be my first option or a cruise/fly holiday.The ship was spotless, the emphasis is on hygiene for the protection of the passengers, with anti bacterial hand wash stations around the ship as well as at the entrance to the dining areas no self respecting germ would survive in ...
Read More

Nice Cruise but be prepared for the upsell

Vibratone64
2-5 Cruises • Age 50s
We were fairly impressed by the Oosterdam, in that it is a beautiful ship with nice decor. I expected it to be tacky from the other reviews but did not find it so. Everything looked very modern and functional. I especially like the glass elevators on the outside of the ship that traveled between decks at midships. The pools are large and one could actually swim laps in them. The hot tubs were ...
Read More

Review for Zaandam to British Columbia

suzuki9999
First Time Cruiser • Age 70s
Arrived at Seward for "priority " boarding ,travelled 16 hours: After 20 minutes were told room had been given to someone else: Eventually we were whisked on board after an hour and told to go to front office; Without telling us, our onboard cards were switched from designated dining room seating to scramble for all. i asked 3 timess to speak to a manager, no one came to discuss with ...
Read More