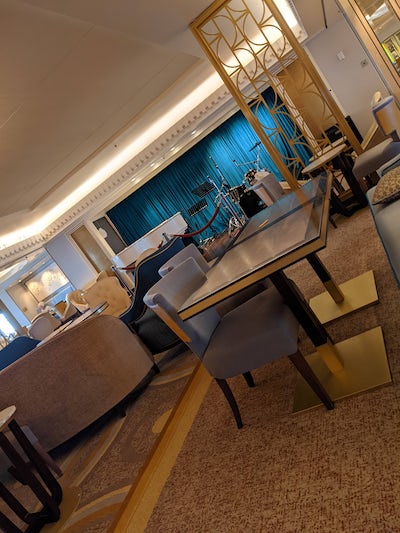 2freespirits
10+ Cruises • Age 60s
Embarkation - Sunday September 30th We flew to Quebec City airport on Sunday September 30th and took a taxi to the QM-2. Embarkation was quick and easy as only a portion of the passengers were embarking/disembarking at this port. After we boarded, crew members guided us through the Grand Lobby to the elevators that took us to deck 10 and we found our cabin easily. As a testimony to the ...
Read More

dogs rule
6-10 Cruises • Age 70s
We traveled from Quebec City to New York (Brooklyn). The ship was in very good condition, with a very comfortable bed in our balcony room (deck 12). We were really disappointed that the Planetarium was not fully functional, only one show was available and that one had issues with sound. The ship did a really good job on Gluten Free food selections, much better than Princess or Celebrity. Note ...
Read More

QM2 - Not happy about the changes

MCC retired
10+ Cruises
This was our 6th voyage aboard. First since the Re-Mastering in 2016 . The Service and general ambience continued very good as expected . Dining also was as good as it gets. Kings Court improvements were well received by most . Caronia Lounge was also a big improvement over the old , very underutilized Winter Garden. I was suprized that the cabins added on deck 13 seemed hardly ...
Read More

karesel
6-10 Cruises • Age 70s
The food in the main dining room at times seemed to be partially spoiled and the portions were small enough that it appears they are trying to "force" passengers to use the extra cost alternative dining. The selection in the buffet was very limited with a big emphasis on pork and lamb with very little beef ever. The employees in the buffet area were very discourteous they would step out in front ...
Read More

docboss1
2-5 Cruises • Age 50s
Amazing QM2 history! We had a queens grille suite and was quite impressed by the space and service the butler was a quick call away . The restaurant was amazing for the queens grille we could pretty much order anything we wanted as long as we gave them notice at lunch! Had caviar and vodka Queen Mary style!! The FOD get togethers were fun and there was a nightclub behind the ballroom floor! The ...
Read More

Platinum Traveller
10+ Cruises • Age 80s
My wife and I chose the Queen Mary 2 because it was making this itinerary at the time we wanted. We hadn't visited the delightful Quebec City before and we thought the 'Fall Colors' would be nice to see again. Both 'platinum level' Cunard guests, we have travelled on the QM2 several times before and were anxious to witness the 'remastering' which the ship was given this summer. We noticed the ...
Read More

Dixiepoo
2-5 Cruises • Age 80s
50th anniversary. Wifi was expensive and a constant headache. Transfer to laguardia airport was mishandled. Not enuf buses, crowds of people waiting outside the ship for a bus, most of them quite elderly. No place to sit or get out of the elements. Thank goodness it did not rain. No excuse for Cunard not to know how many buses necessary for the transfer. This info is provided well in advance of ...
Read More

axelskater
10+ Cruises • Age 40s
This was my last voyage before the dry dock coming after the WC, so I hope to write a comparison next year - as we have booked the same class and the exact same trip - Quebec to NYC. I hope this review helps give a few tidbits and happy thoughts - though there was a hiccup or two. Boarding: NYC & Southampton have it down to a science; Quebec City was complete chaos. Enough said. And as ...
Read More