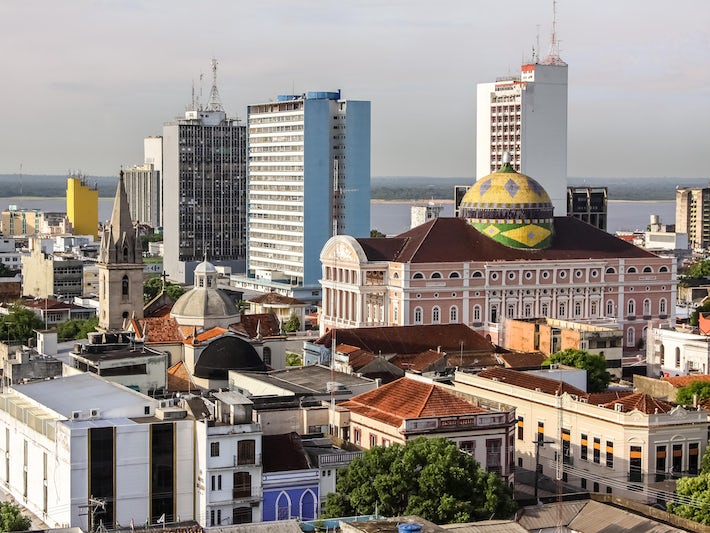 Find Things to Do in Manaus on Viator

Popular Things to Do in Manaus

Food and Drink in Manaus

The street markets are filled with stands selling local specialties. To accompany your sandwich or fried pastry, try a cooled coconut. The vendor pulls a whole coconut from the ice chest, punches a hole in the top, inserts a straw, and serves it -- refreshing, particularly in the heat and humidity. Local ice cream is delicious too (try the tropical fruit flavors).

For a convenient meal of Brazilian favorites, check out Choppicanha Bar and Grill (092-631-1111), which is located on the pier right beside where the cruise ships dock. It features lots of churrasco (beef offerings), some local fish and a great assortment of cold Brazilian bottled beers. The outdoor tables are nicely shaded and the indoor tables are air-conditioned.

Canto da Peixada (Rua Emilio Moreira 1677, 092-234-1066), about a 15-minute cab ride from the dock, for its authentic and rustic approach to barbecued (a la brassa) local fish. It is a small place, nothing fancy, and the tables are set up outside. When they roll up the metal doors, consider it open. Pope John Paul II ate here during his 1981 visit to Manaus.

For dessert or a midday snack, head to Glacial (Avenida Getulio Vargas 161A or 188, a local ice cream chain. Choose a dish size, fill it up with as many flavors and toppings as you'd like, and pay by weight. If you don't speak Portuguese, you'll have to guess at the flavors, which include local fruits like acai and cupuacu.

The Teatro Amazonas, or Opera House (Praca Sao Sebastiao, 092-622-1880, 9 a.m. - 4 p.m. daily except Sunday, $7 for guided tour only in English -- no independent entry) is a spectacular monument to what money and serious taste can do. Built at the peak of the city's rubber boom, it offers what was then the finest in European craftsmanship. The lobby, opera house and upstairs ballroom are filled with Murano chandeliers. The seats, individual armchairs made from the local jacaranda wood and polished to a gleam, date from the opera house's opening but have, of course, been reupholstered. The opera house floor is laid with the same wood used in La Scala, and the ballroom floor is composed of 12,000 pieces of rain forest woods laid without glue or nails. Outside balconies are of Portuguese stone, the doors are Parisian originals, and the painted curtain is from Tiffany's. The unique dome was constructed so that the spectacular curtain could be raised and lowered without folding or rolling it. The theater ceiling was painted in Paris and reassembled in Manaus. It depicts what it is like to stand looking up at the Eiffel Tower. Be sure to check out the vents under alternate rows of seats to see what passed for air-conditioning in 1896. When outside, look for a few of the surviving rubber-coated bricks in the driveways (to muffle the sounds of approaching carriages). The public square in front of the building contains statuary from mythology and a huge fountain built to represent Manaus' trade with all four corners of the world.

Museu do Indio (Rua Duque de Caxias 356, 092-234-1422, 8:30 a.m. - 11:30 a.m. Monday - Saturday and 2 p.m. - 4:30 p.m. Monday - Friday, $2) is a rather nondescript building run by an order of Catholic nuns called the Salesian Sisters. In their museum, they feature artifacts of the social and cultural structure of the native people of the region. The exhibits are contained in six separate rooms, and include displays of clothing, jewelry, ceramics, shelters, woven mats and baskets, costumes and ritual masks, musical instruments, funeral items, and a display of early-20th-century medical instruments. There are no guides; the labels and signs are in Portuguese; and there is no air-conditioning in the building. Nevertheless, it is a good place to get a glimpse of what life for natives of the region was like.

Catedral da Nossa Senhora da Conceicao, or Cathedral of Our Lady (Praca da Matriz, no phone, daily during daylight hours, free) was originally built in 1695, and rebuilt in 1878 after being destroyed in a fire. It is a very simple building, with little major art -- in stark contrast to most European cathedrals. The glass is in primary colors, and creates a bright and colorful palette inside. The building stands on a slight rise, with sweeping stairs rising to the entrance. Below is the church square, which is usually surrounded by vendors and their wares.

Mercado Adolfo Lisboa (Rua dos Bares 6, 092-234-8441, dawn until about midday, free) is the main market of Manaus. The building, a wrought-iron and brick structure, replicates the original Les Halles market in Paris. Now it is filled with vendors of all types selling meat, many varieties of local fish, produce, spices, trinkets, clothing, medicinal oils, and snacks of all kinds. The meat and seafood area is particularly interesting, with lots of unusual offerings, but the lack of air-conditioning or refrigeration will probably limit the amount of time one might spend in this section.

Mini-Zoo do CIGS (Estrada do Sao Jorge 750, 092-671-6903, 9 a.m. - 4:30 p.m. Tuesday - Friday and 9 a.m. - 6 p.m. Saturday and Sunday, $2) is the city zoo and lies a short cab ride from the city center. This is a strange institution -- it adjoins a military base, and many of the animals were captured by the troops while on maneuvers. Visitors should be warned that this is neither a rich city nor a rich country, and the zoo is certainly not up to U.S. standards. Many cages are small and cement-lined, and the animals are lethargic. That said, it is probably the only chance visitors will have to see native jaguars, birds and snakes up close. The grounds are well shaded and pathways are wide. Signs are in English.

Encontro das Aguas (Meeting of the Waters) occurs where the black water (clear with a rather high acidity) of the Rio Negro meets the white water (murky with mud and a more neutral acidity) of the Solimoes about four miles downstream from Manaus, forming the Amazon. The waters flow side by side in parallel stripes for miles before finally merging, becoming a brown river that flows to the sea. The rivers do not mix more quickly because of the differences in water temperature and river flow rates. It is a phenomenon unique to the region and one that can be enjoyed from the comfort of your ship.

Shopping: The main areas for vendor activity are the Mercado Adolfo Lisboa, Rua Marcilio Dias, Rua Marechal Deodoro and the streets surrounding the cathedral. All except the Mercado are outdoors along busy streets. Be prepared to bargain.

Ecoshop (092-232-0409), in the Hidroviaria International Terminal, is the perfect place to find high-end indigenous crafts. It's a little pricey, but the unusual selection makes up for it.

Manaus is a free-trade zone, and the area a few blocks off the waterfront is full of electronics shops. Prices in Manaus are lower than in other cities in Brazil, but not necessarily below those available at home or through the Internet. Be informed before you buy and carry.

Manaus is a center for rain forest and river excursions, nighttime trips in the forests, and more exotic overnight and longer treks further into the wilds. The excursions are of two types -- riverboat trips and excursions based at jungle lodges. Whichever type you choose, if you do not book through your cruise line, make your arrangements before leaving home.

Two reputable and highly recommended vendors are Viverde (092-3248-9988) and Amazon Mystery Tours (092-3633-7844). The Secretaria de Estado da Cultura e Turismo, or Tourist Bureau (092-633-2850) can provide a listing of legally registered touring companies. In no case should passengers purchase excursions from hustlers or freelance salespeople at hotels and bars or in the markets.