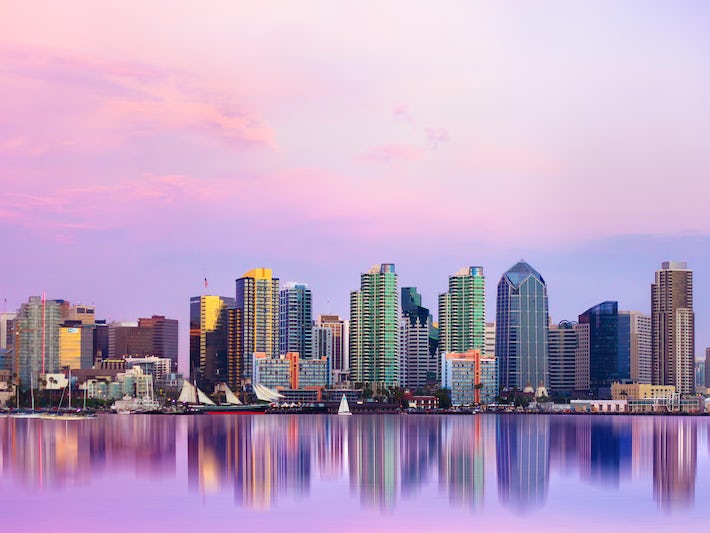 Popular Things to Do in San Diego

Beautiful San Diego is the second-largest city in California and certainly one of the most well-known, primarily for its amazingly sunny weather and gorgeous beaches. Cruisers who have a bit of time should consider shore excursions to the San Diego Zoo or out to Temecula's wine country, but there's plenty to do within the city itself. If you have children, a trip to Legoland might be in order. Boating and water sports are popular diversions among visitors and locals alike. As home to people from diverse cultures, the food scene is incredible (tacos are a must).

San Diego is said to experience more than 300 sunny days a year, so no matter when you travel, it's likely to be a good time. English is the official language here, but many streets have Spanish names thanks to the city's history as former territory of Mexico. Currency is the U.S. dollar.

Find Things to Do in San Diego on Viator

Food and Drink in San Diego

Many San Diego restaurants celebrate farm-to-table cuisine, drawing from the area's abundant specialty growers and fishing enterprises. Mexican food abounds, too; it seems there's a taco shop on every commercial block in this city where fish tacos were made famous. A boom of craft brewers have made San Diego a mecca for beer lovers from around the world who travel there to sample acclaimed neighborhood gastropubs.

The Fish Market and Top of the Market will satisfy seafood cravings. These popular seafood restaurants owned by the same company are a few blocks south of the cruise terminal; they occupy a large waterfront building with stunning views across the bay to Coronado. Go casual downstairs or find fine dining upstairs. The restaurant has its own fishing fleet, so you know the catch is fresh and local. No wonder the clam chowder and cioppino are menu favorites. (750 N. Harbor Drive, between Kettner Boulevard and G Street; 619-234-4867; open 11 a.m. to 9:30 p.m. Monday to Sunday, 11 a.m. to 10 p.m. Friday to Saturday)

Since celebrity chef Brian Malarkey opened Searsucker, this flag-ship restaurant has become the Gaslamp's best for food and high-energy atmosphere. You'll be in the middle of the action while savoring Malarkey's upscale down-home fare like duck fat fries and a two-patty burger with secret sauce. If you prefer a quiet place to chat and dine, this isn't for you. The restaurant also serves one of the best lobster rolls east of Nantucket. (611 5th Avenue, between Market and G streets; 619-233-7327; lunch 11 a.m. to 2:30 p.m. Monday to Friday, dinner 5:30 p.m. to 10 p.m. Sunday to Thursday; dinner 5:30 p.m. to 11 p.m., Friday to Saturday)

Bertrand at Mister A's, the venerable hilltop fine-dining restaurant with stunning city and bay views, has served up celebratory fine dining for decades. Rejuvenated in decor and cuisine, it offers an extensive menu of traditional dishes with a contemporary twist -- like their signature king and blue crab salad or the irresistible Snicker Bar Mousse. The decor and setting is upscale, but the professional staff keeps the experience friendly and relaxed. The nightly happy hour is one of the city's best; so is the new brunch. Tip: Park for free on the street after 6 p.m.; there's no validation for the underground garage. (2550 5th Avenue, 12th Floor, between Laurel and Maple streets; 619-239-1377; open 11:30 a.m. to 9:30 p.m. Monday to Friday, 5 p.m. to 9:30 p.m. Saturday to Sunday)

A North Park gem, Carnitas' Snack Shack offers a dining experience that is quintessential San Diego. Chef Hanis Cavin has single-handedly created a new category of gourmet cuisine based on the humble hog. The place is tiny; a walk-up window often has a long line of hungry fans eager to devour a plate of carnitas tacos or a triple-threat pork sandwich. A small but delightful patio in the back fills up quickly. (2632 University Avenue, between Pershing Avenue and Villa Terrace; 619-294-7675; open noon to midnight Wednesday to Monday, closed Tuesday)

Judging by lines out the door at the 60,000-square foot monument to beer and good food, Stone Brewing World Bistro & Gardens at Liberty Station is a crowd pleaser. Dishes on the limited all-day and brunch menu, ranging from bison short ribs to barbecue duck tacos and chicken tikka masala, are designed to be paired with Stone's artisan brews. Decor -- tumbling water, granite walls and boulders -- provides a wow, whether dining inside or out. It's family friendly, too; kids are welcome. Reservations recommended. Tip: Some dishes are spicy hot; ask your server for ones that suit your heat tolerance. (2816 Historic Decatur Road, suite 116; 619-269-2100; 11 a.m. to 9 p.m. Monday to Thursday, 11:30 a.m. to 10 p.m., Friday and Saturday)

Best for Surfing: In funky Ocean Beach, the long stretch of sandy beach from Sunset Cliffs Natural Park north to the jetty offers prime surfing. Smaller breaks north of the pier are ideal for beginners, while larger waves off Sunset Cliffs can give experienced surfers a great ride. Before paddling out, check the daily rip currents report posted at the lifeguard station north of the pier.

Twenty-five minutes north of downtown is La Jolla Shores, an expansive beach and grassy park that abut wealthy La Jolla village, which features upscale dining and retail sites. Near the beach, small boutiques sell sun wear and beach gear. Casual dining to fit most any budget also can be enjoyed.

Best for Nature-Lovers: Torrey Pines State Beach north of La Jolla gives nature lovers the option of enjoying sun and sand au natural. This popular destination includes views of the nearby Torrey Pines Glider Port where hang-gliders swoop above stunning sandstone cliffs. Extensive hiking trails climb to ocean vistas before wending back to the shore that includes secluded Black's Beach where it's perfectly legal to soak up sun in the buff. The northern section of beach, near the parking areas parallel to the highway, are just fine for those who would rather not experience their fellow sunbathers or themselves sans suits.

There are many reasons why Balboa Park is world famous. The 1,200-acre park in the center of the city is home to the San Diego Zoo, Museum of Man, San Diego Museum of Art, San Diego Natural History Museum, Museum of Photographic Arts and 14 other museums. Enjoy theater on the Old Globe's three stages and free concerts at the Spreckels Organ Pavilion. Balboa Park also has eight glorious gardens, ranging from the Inez Grant Parker Memorial Rose Garden to the Japanese Friendship Garden. Learn about architectural, ranger-led, historical and horticultural tours at the Visitor's Center in the House of Hospitality (open 9:30 a.m. to 4:30 p.m. daily). A free Balboa Park Trolley (9:30 a.m. to 5 p.m. daily in summer; 10 a.m. to 3:30 p.m. in winter) stops throughout the park and various public parking lots.

For a long time, San Diego was famous mostly for its zoo. Still a top attraction, the San Diego Zoo draws millions of visitors to view pandas, rhinos, tigers, elephants and so much more. Miles of trails wind through the zoo's lush 100 acres perched on the north side of Balboa Park, so a map and good walking shoes are essential. The best way to begin a visit is to get oriented with the entertaining 35-minute guided bus tour. An Express Bus also lets you hop-on and hop-off at five popular stops around the zoo. There's a lot to see, so plan on at least a four-hour visit. (2920 Zoo Drive; open daily, hours vary)

Located on 190 acres on the shores of Mission Bay Park, SeaWorld San Diego attracts more than 150 million visitors annually. Since opening in 1964, it has become San Diego's leading paid tourist attraction and one of the most popular marine-life parks in the world. The park offers guests a number of up-close and personal experiences with dolphins, beluga whales and penguins. The theme park also entertains with wet-and-wild thrill rides and shows featuring a cast of marine animals including, of course, Shamu and friends. (500 Sea World Drive; 800-257-4268; hours vary)

Within easy walking distance of the port are the Gaslamp Quarter and Little Italy, the dining and nightlife centers of the city. It's hard to believe they were sketchy destinations years ago, but in recent decades, both have blossomed into a modern urban entertainment centers with dozens of restaurants, outdoor cafes and trendy shops. Both have their own charm and character; enjoy the Gaslamp's beautifully restored Victorian buildings, and savor Little Italy's historic and authentic Italian atmosphere. Frequent entertainment events and festivals pack streets in both neighborhoods throughout the year. If you happen to be in port on a Saturday, the Little Italy Mercato farmer's market is one of the city's best, drawing customers, including chefs, from around the county.

The Embarcadero, downtown's bayside district, which includes the cruise port, is home to the Maritime Museum of San Diego and the USS Midway Museum. The Maritime Museum (1492 N. Harbor Drive; 619-234-9153; open daily 9 a.m. to 9 p.m. June to September; 9 a.m. to 8 p.m. after Labor Dayy) offers a renowned collection of historic ships including the magnificent Star of India, the oldest (1863) active sailing ship in the world. It's hard to miss the USS Midway Museum, just south of the cruise terminal (910 N. Harbor Drive; 619-544-9600; open 10 a.m. to 5 p.m. daily). In the few years since the hulking WWII-era air craft carrier permanently docked in the city, it has become one of the region's top attractions. Vets and non-vets will enjoy the 60-plus exhibits and 30 restored aircraft parked on the flight deck and in the hanger bays.

Get the adrenaline flowing as you serve as a crew member on the 1992 racing yacht Stars & Stripes USA-11 made famous by Dennis Conner -- even though he didn't win -- during the America's Cup held in San Diego. Trim the sails and take the helm as the yacht speeds around San Diego Bay. You'll pay about $125 per person for a three-hour sail.

During the winter months, numerous whale-watching services offer cruises and aerial tours out to the ocean where the giant mammals can be spotted on their annual migration south. Seas can be rough, so dress warmly and bring seasickness medication. During other times of the year, these companies offer harbor excursions with views of San Diego Bay landmarks, the nation's largest naval fleet and harbor.

Kayaking is the sport for ocean-lovers who would rather sit, than swim. Ocean Experience kayak tours introduce students to the fundamentals of kayaking while gliding past the scenic San Diego coastline. Kayak clinics are offered every Saturday and Sunday for two hours starting at 9 a.m. Cost is $70, with all equipment provided.