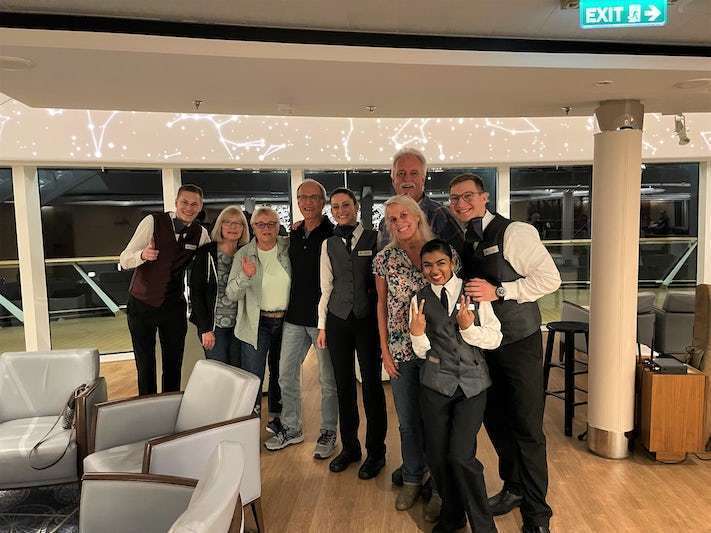 See all photos
Cruiser Rating
4.9
Very Good
7 reviews
Ratings by category
Featured Review
Had a fantastic cruise
"The pre-cruise package in Barcelona was very good.October is a great time to tour in Europe as the crowds were down yet the weather was wonderful...."Read More

musicman51
2-5 Cruises • Age 70s
We have enjoyed a Viking River Cruise in the past, but it's hard to find a river from Barcelona to Italy. There were many similarities with the river cruise, including great food and a staff that lives to please. The Chef's Table originally felt like an iffy choice for us, but we enjoyed both nights we dined there. Reindeer Consume was not our usual fare, but the adventure was a pleasant ...
Read More

Had a fantastic cruise

canyonpines
2-5 Cruises • Age 70s
This was our third Viking cruise. We had been on two other cruises through other cruise lines. Viking is so much better than they were. The crew was wonderful. We grew so fond of the various servers that it was sad when we had to disembark. The food was great, as were the drinks. I highly recommend the Silver Spirits package. It was fun to try the drinks our bartender in the Explorer Lounge bar, ...
Read More

Cruise of a lifetime!

mmwall
2-5 Cruises • Age 70s
I have been on a Viking River Cruise so Viking was my first choice for an ocean cruise. And the fact that it was a smaller, more intimate ship made it just what I was looking for...and the itinerary couldn't have been more spectacular. Within a day, staff knew our names and by day 2 knew our drink preferences. Attention to detail was amazing. And the ship itself was aesthetically pleasing ...
Read More

gwantz82
2-5 Cruises • Age 60s
This was a once in a life time cruise. The places to see and visit was outstanding. The local tour guides knew a lot about what to see and how to look at art from different angles. We had enough time in port to enjoy most of the locations, but at a couple of cities, we were rushed and did not have time to see the palace or churches in Pisa. Our room was very pleasant and was always ...
Read More

Wasnt a Fan of Cruises But...

bdoa
2-5 Cruises • Age 60s
Prior to my Viking Jupiter cruise, I had only been on one cruise, and I didn't like it. It was a huge ship (I won't say the name but suffice it to say, way too many people). My friends talked us into this cruise (Viking) as they have done a couple cruises with Viking. I was reluctant but we went. IT WAS AWESOME! The ship was absolutely clean, the crew was so friendly and attentive, the excursions ...
Read More

c.stets
10+ Cruises • Age 70s
I have traveled on Viking previously and love this cruise line! Our trip was spectacular and the excursions were so interesting! I especially enjoyed seeing David, Florence, Villa Rothchild, Pompeii, Croatia and Tuscany! All the other excursions were spectacular as well but these were the highlights for me. All of the guides were excellent. The ship was full of eager employees whose only ...
Read More

Sue McKee
2-5 Cruises • Age 80s
We chose this cruise because it allowed us to visit parts of Europe where we had not travelled before, namely Spain and Portugal. We experienced a high speed train ride from Madrid to Barcelona where we saw Gaudi's architecture including La Sagada Familia. It was crowded but amazing, In Cartegena.our shore excursion included visits to the Roman theatre and historical museums. Later shore ...
Read More