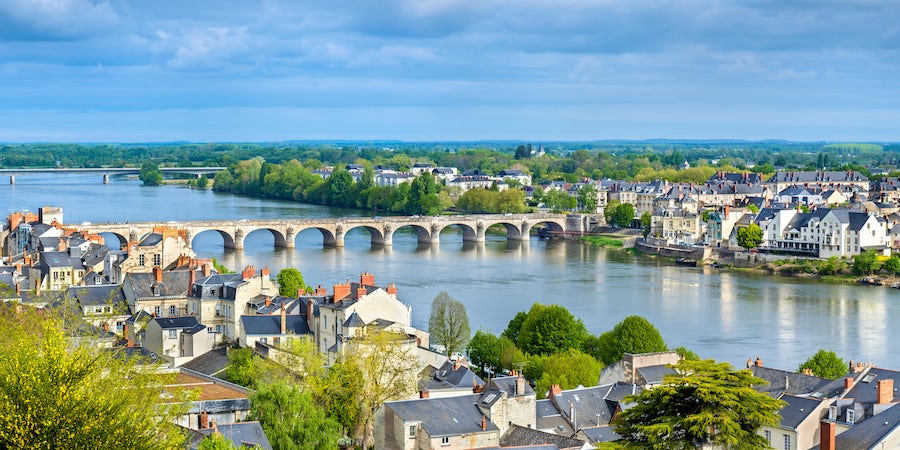 Panorama of Saumur on the Loire River in France (Photo: Leonid Andronov/Shutterstock)

The Loire River, France's longest waterway, rises in the uplands of Massif Central in the country's central southern region and flows 629 miles northwest into the Bay of Biscay on the Atlantic coast at St. Nazaire. It is variously known as the 'royal river', due to the number of kings and aristocrats who lived in the hundreds of beautiful castles and chateaux that line its banks, and the country's last 'wild river' because of its unpredictable currents and shallow water.

The Loire Valley is the largest area in France to be included as a UNESCO World Heritage Site and its dreamlike landscapes have long captivated artists and authors. In addition to its culture-rich history, modern-day attractions range from Nante's quirky art trail to close-up views of cruise ships being built at the shipyard that produced some of the world's greatest ocean liners.

Famous-name wines including Muscadet, Chinon, Vouvray, Cheverny and Sancerre all come from this region and no visit would be complete without trying a slice or two of the regional dish Quiche Lorraine.

Not all of the Loire is navigable, and it was only in April 2015 that French-owned CroisiEurope launched the first boat offering overnight cruises on the river. Until then, only short daytime pleasure cruises were available, but with a draft of just 2 feet, 6 inches and two side-mounted paddlewheels, the 96-passenger Loire Princesse can sail in the shallow waters.

European Waterways offers intimate barge cruises, in vessels carrying six to 12 passengers, along the Canal Lateral a la Loire, which runs parallel to the unnavigable stretches of the upper Loire River, Briare Canal and River Cher, one of the Loire's main tributaries.

CroisiEurope's newest barge Daniele, accommodating 24 passengers, will also cruise on the Briare Canal, between Burgundy and the Loire Valley, when it is launched in 2016.

AmaWaterways and Viking River Cruises offer pre- or post-cruise Loire Valley land extensions to their Paris and Bordeaux itineraries, and Scenic has a 23-day itinerary with a section of the land tour in the Loire Valley. The main Loire itineraries are CroisiEurope's six- and eight-day round trips from Nantes, with ports of call including Ancenis, which is the gateway to the Muscadet wine route and pretty medieval town of Clisson, and Bouchemain, starting point for a visit to the some of the region's best-known chateaux.

Barges on the Canal Lateral a la Loire will typically moor at the village of Menetreol-sous-Sancerre for a visit to the hilltop village that produces the namesake wine, and Marseilles-les-Aubigny, where the nearby Floral Park at Apremont-sur-Allier was inspired by formal English landscaped gardens. These cruises are a good choice for families and groups of friends -- who can charter an entire vessel -- as well as active passengers. You can hop off at locks to walk or cycle along the tow paths and explore nearby villages, and then pick up the barge again further down the canal. As the vessels travel at walking pace, there is no danger of getting left behind.

The main season is from April to October, and visitors can expect warm, pleasant weather in springtime and late summer, with chillier and rainier weather towards the end of the season in fall. Temperatures are hottest in August, which can make sightseeing tiring; this month is also the main holiday season for the French, and as a result, many smaller shops and restaurants shut down. CroisiEurope also offers cruises over Christmas and New Year, providing an opportunity to enjoy traditional festive markets. Nantes: The starting and finishing point for cruises on the River Loire, this docking spot is ideally placed to explore Les Machines de L'ile, a fantastic regeneration of the old shipyard that was been inspired by science fiction author Jules Verne, who was born in Nantes. It includes a three-story marine-themed carousel and an amazing 40-foot wooden and steel elephant that carries 50 passengers and sprays passersby with water from its trunk. A stroll around Nantes, or guided tour, will take you into narrow streets lined with tempting chocolate and patisserie shops and past the delightful old timber-framed buildings in the Bouffay district. Wherever you go you're sure to come across one of the 23 art installations that symbolize the modern-day city. They include huge hoops on the river bank and an intriguing, partially submerged house in the middle of the river.

An excursion highlight is a visit to Saint-Nazaire's STX France shipyard, one of the largest in Europe. The birthplace of some of the greatest French transatlantic liners, such as the Normandie launched in 1935, these days it builds vessels such as Royal Caribbean International's gigantic 5,479-passenger Harmony of the Seas, launching in 2016. The tour reveals a fascinating insight into the shipbuilding process from start to finish and there is always a ship under construction to see. Nearby is Escal' Atlantic, Saint-Nazaire's former submarine base which has been transformed into a recreation of the elegant ocean liners built in the city and is filled with nostalgic artifacts and interactive displays.

Angers: The capital of the historic Anjou province has quaint cobbled streets and plenty of cafes and bars to stop off and enjoy a glass of fruity Muscadet wine and the local orange-based liqueur Cointreau. The city landmark is the 13th-century castle of Angers, with its unusual two-toned towers. It houses the extraordinary 328-foot Apocalypse tapestry -- one of the largest in the world -- that was commissioned by the Duke of Anjou in 1370 and took seven years to complete. From Angers, you can visit the home of French horsemanship, the Cadre Noir military riding academy in Saumur that was founded in 1825. Tours take in the grand riding arena and stables, and you might be lucky enough to see some of the beautiful horses performing classical dressage movements.

Ancenis: From this town, overlooked by a 16th-century castle, there are tours along the Muscadet wine route which is filled with pretty wine villages and historic wine producers such as Chateau Cassemichere, where the vineyard and cellars are open for tours and tastings. Tours to the unusual town of Clisson are offered from Ancenis. Situated at the confluence of the rivers Sevre Nantaise and the Moine, Clisson has a distinctly Italian feel. This is because it was fashioned by three French artists who helped reshape the town on their return from Italy after the 18th century when many of Clisson's buildings had been destroyed during the Vendee wars.

Bouchemaine: This is the main port for day trips to some of the 1,000-plus chateaux of the Loire Valley. The closest to Bouchemaine is the romantic cream-colored Chateau d'Usse. In 1697 its fairytale turrets inspired Charles Perrault to write the classic children's tale " Sleeping Beauty", and in more recent times it helped Walt Disney design his trademark theme park castle.  Chateau Azay-le-Rideau occupies a spectacular position on an island in the middle of the River Indre, which creates a mirror-like reflection in the still water. Another highlight is Chateau de Villandry, one of the last large castles built along the Loire. Completed in 1536, it is renowned for its six gardens which include a formal pleasure garden, tranquil water garden and decorative vegetable garden.

Chatillon-sur-Loire: Close by this town on the Canal Lateral a la Loire is the Briare Pont Canal, a marvel of 19th--century engineering that was the world's longest navigable steel aqueduct from 1896 to2003. The 10,000 ton, 2,171-foot aqueduct over the Loire is built on 14 piers designed by Gustave Eiffel -- of Parisian tower fame -- and a registered historic monument. Montargis: Situated on the Canal de Briare, from Montargis there are excursions to UNESCO-listed Chateau de Fontainebleau, one of the largest French palaces and the only one to have been continuously occupied for eight centuries. Every regal inhabitant has left his mark, resulting in a fascinating mix of architectural styles and decor through the years, such as paintings from the Renaissance period and intricate carved wooden ceilings dating back to the 17th and 18th centuries. There are 15 rooms dedicated to Napoleon Bonaparte and his family and a Chinese Museum created by his wife Empress Eugenie.

Pack for all weather: European weather can be changeable, even in summer, so prepare for every eventuality by taking layers, a light rain jacket and umbrella. Comfortable walking shoes or sneakers are also a must, as many towns have cobbled pavements and uneven surfaces.

Make time for meals: In France, lunch and dinner are leisurely affairs, both onboard and ashore. Expect service to be slower than the U.S. with more time between courses. Similarly, coffee on the go is not the norm unless you visit a big brand chain. In small, traditional cafes, wait staff won't be in a rush to take or serve your order, as the French like to linger over coffee.

Don't expect round-the-clock retail therapy: Outside main tourist areas, shops are generally open from 9 a.m. to midday, and 2 p.m. to around 7 p.m. weekdays (and closed on Sundays).