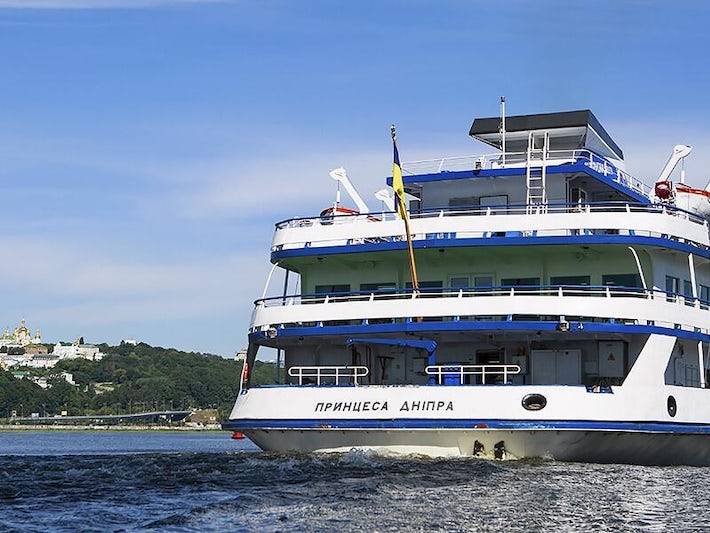 Capable of carrying up to 260 passengers, Dnieper Princess is a classically styled Russian river cruise vessel. Built in 1976, the ship has been substantially refitted over the intervening decades to offer modern accommodations and public areas, including a main restaurant; a lecture hall, lounge and bar; and a small onboard library.

The Russians call this a "Type 301" river cruise ship. A number of these river ships were made in the 1970s and early 1980s, and they've been operating reliably ever since. One of the key defining features of these 301 ships is their impressive amount of open deck space. In addition to an upper Sun Deck, Dnieper Princess has wraparound promenades on three individual decks, offering plenty of private viewing space.

Meals onboard are primarily taken in the main dining room, located at the stern of the ship. Onboard cuisine is a blend of international dishes and local Russian specialties.

A total of seven different categories of accommodations are available onboard Dnieper Princess.

Twelve Dedicated Single Staterooms are available for solo travelers. These 91.5-square-foot rooms are snug and best resemble a sleeper berth on an overnight train. That's not a downside, though. These cozy rooms represent an excellent value for solos looking to river cruise. Like all rooms aboard the Dnieper Princess, the Dedicated Single Staterooms offer a panoramic window that opens and private facilities with shower, sink and toilet. Onboard power is of the two-pronged, European 220V style.

There are 58 Twin Standard cabins onboard Dnieper Princess, making these rooms, by far, the most numerous. These are fitted with two twin beds that resemble pull-down couches during the day and come with a window that opens, plus private facilities. These rooms measure 96 square feet.

Twin Porthole cabins are larger at 129 square feet and feature porthole windows. Located on the ship's Lower Deck, these rooms feature two pull-down lower berths and pull-down upper berths that can allow for triple or quad occupancy. It is worth noting that because of the relative location of these rooms near the waterline, the porthole windows cannot be opened.

Twin Comfort rooms are 123 square feet but feature more contemporary decor than the previous categories. There are six of these rooms onboard, spread out between the Boat Deck and the Upper Deck. They feature a queen-size bed that can be split into two twins, along with a small seating area, wardrobeand a flat-panel TV -- something the previous categories lack.

Deluxe Staterooms offer 145 square feet of living space along with picture windows that can be opened and queen-size beds that can split into two twins. It's worth noting that Deluxe Staterooms on the Boat Deck have just one window, while those on the Upper Deck offer two. These rooms feature a hair dryer, flat-panel TVand safe.

A total of eight Junior Suites can be found onboard, offering 183 square feet of living space. In addition to a queen bed and a small seating area, they feature two panoramic windows that open, enlarged bathroom facilities, a wardrobe, a flat-panel TVand a safe.

The largest accommodations onboard are the ship's three Mini Suites. All located on the Boat Deck, they are 204 square feet and feature a queen-size bed that can split into two singles; panoramic windows that open, a spacious sitting area and a wardrobe, flat-panel TVand a safe.

On the Sun Deck, passengers aboard Dnieper Princess will find the ship's lecture hall and lounge, which also features a bar and a dance floor. Outdoor seating is available here as well.

Entertainment aboard Dnieper Princess revolves around activities ashore, onboard lectures and enrichment activities, like language classes and history presentations. Cruisers may find it enjoyable to dance the night away in the ship's lounge, or converse over drinks before and after dinner.

Dnieper Princess sails along the Dnieper River from Kiev, Ukraine to the Black Sea on Imperial River Cruises' Kiev-Vilkovo-Odessa-Kiev itinerary.