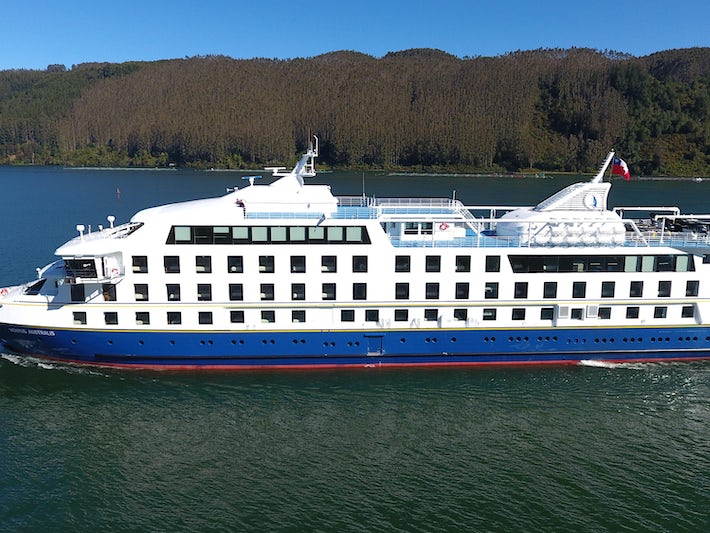 The 210-passenger Ventus Australis was launched in January 2018 as a sister to Stella Australis, both owned by Chile-based expedition cruise line, Australis. Both ships operate three-, four- or seven-night itineraries in the Southern Hemisphere during summer, September to April, between Ushuaia in Argentina and Punta Arenas in Chile, exploring the misty sounds and inlets, forested islands and massive glaciers of Tierra del Fuego and Chilean Patagonia.

Assigned seating at meals that can't be changed

There are many highlights in these short voyages, although a landing at wind-swept Cape Horn is a bucket-list item for a lot of people, as is a chance to follow in the wake of the great explorers through the Beagle Channel and the Strait of Magellan, retracing their many searches for a passage from the Atlantic to the Pacific.

Ventus Australis builds on the success of its sister and, in fact, is very similar: same size, same number of cabins, same arrangement of lounges and almost the same layout. The main difference is the decor, which is, as you might expect, more contemporary on the newer ship; furnishings have a more luxurious, stylish feel.

Ventus is a proper expedition ship -- compact, with a shallow draft for navigating the tidal fjords and sounds, and equipped with powerful Zodiacs for shore excursions. The guides who escort every foray ashore are superb, full of anecdotes about life on the edge and have intimate knowledge of the ecology. This voyage is all about wildlife, scenery and the extraordinary story of everyday survival in one of the wildest spots on Earth, so you won't find any fancy entertainment or fripperies like a spa or live music. At most, documentaries are shown after dinner and evenings center around chatting in the Darwin Lounge. There are no TVs in the cabins (a deliberate decision) and no Wi-Fi or cellphone signal (again deliberate), which is a bonus; you really find yourself immersed in your surroundings without the distractions of the outside world.

Days onboard fall into a pattern of early breakfast, a morning hike or Zodiac tour, a lecture or briefing, lunch, a second trip ashore, drinks in the bar, dinner and a documentary or bed. When the ship is sailing, there's an almost dreamy quality to life onboard thanks to the big picture windows that are a feature of every lounge and of the cabins; with no electronic interference, you just find yourself staring out at the scenery for hours.

A degree of fitness is required for these voyages. All trips ashore are by Zodiac, so you have to be fit enough to get on and off these in potentially choppy sea, although the aft boarding platform is very stable -- and the crew's attention to safety is second to none. Shore excursions involve some reasonably challenging hikes, although there is always an easy option offered.

An expedition on Ventus Australis shouldn't be seen as an alternative to Antarctica, or a cheaper, easier way of having a similar experience. It's actually completely different. This is coastal cruising at its purest, the ship's small size allowing it to get close to the extraordinary scenery of Patagonia; towering cliffs, ribbon-like waterfalls, creaking glaciers and curious evergreen beech forests known locally as "lenga," draped with lichen. The human side of the region's history -- of indigenous tribes, explorers, settlers, convicts and, today, conservationists -- is fascinating. You will see birds, including penguins, skuas, condors and cormorants, and probably sea lions, and possibly whales and dolphins. But, more than anything, there's a sensation of being alone in the wilderness. Sister ship Stella aside, no other company offers these itineraries.

There were 22 nationalities on our cruise: Americans, who were part of a tour group of 40; Canadians; Australians; Chileans; French; Italian and many more, from Israel to Brazil and Singapore. Ages ranged from two families with children under 10 to mid-80s, although most people were aged between 50 and 65. Most are couples, but there were a few groups of friends and singles; this is actually a good cruise for solo travel as you're rarely alone -- you are assigned a table for all meals and spend a lot of time with other people, doing the various activities.

Announcements are made in languages to reflect the bigger groups, in this case, English, Spanish and German. For talks and briefings, Spanish and Italian speakers were accommodated in a separate lounge and in the English-speaking sessions, headphones and simultaneous translation provided for the German-speakers. Groups on shore hikes and Zodiac rides were split into English, German and Spanish/Italian/Portuguese speakers; the guides were impressively multilingual.

There is no specific dress code and only one night, the final captain's dinner, with a vague suggestion that you dress up a bit, but most people didn't; evening attire varied from smart palazzo pants for women and chinos for men to jeans and even tracksuit pants, which caused a raised eyebrow or two among the stylish Chileans. A packing list is on the line's website but essentials include proper walking boots (you will get muddy and there are roots and rocks to clamber over), a decent waterproof or fleece-lined jacket, hat, gloves and sunglasses. Layers are best as you get hot on the more energetic hikes. The guides wear rubber boots, as they have to prepare the landing area, which involves standing in water; if you want to do the most challenging hikes, these are a good idea as you are knee-deep in mud sometimes. A limited supply of walking poles is available, free of charge. A decent camera is essential. Should you be thinking of bringing a drone, don't, as they're banned by the local authorities -- and selfie sticks, mercifully, are banned on Magdalena Island, as they offend the penguins.

The cruise fare includes all shore excursions, of which there is a choice most days, and drinks onboard. Gratuities are not included; the suggested amount for tips is $15 per day, per person, but this is discretionary. An envelope for tips is left in your cabin on the final night, or you can pay by credit card. The onboard currency is the U.S. dollar.

We were aboard Ventus Australis for four nights, from Ushuaia to Punta Arenas, the last week of March.Read More
tomculb

One of a Kind Adventure

Spectacular scenery at the southern end of the World

The Ventus (means Southern Wind) is brand new, just coming online in early January, 2018, and holds 210 guests. I think we had about 140 on this sailing at the end of January with 60 crew members.Read More
barefootbeach

Good for retired people who look for all inclusive

Going both direction makes no sense (increased proximity to land on cape horn, we did both direction, landing was possible only once; from Puntas Arenas down to Ushuaia is better - you see the alley of the glaciers by daylight).No Wifi (!?Read More
AX7000