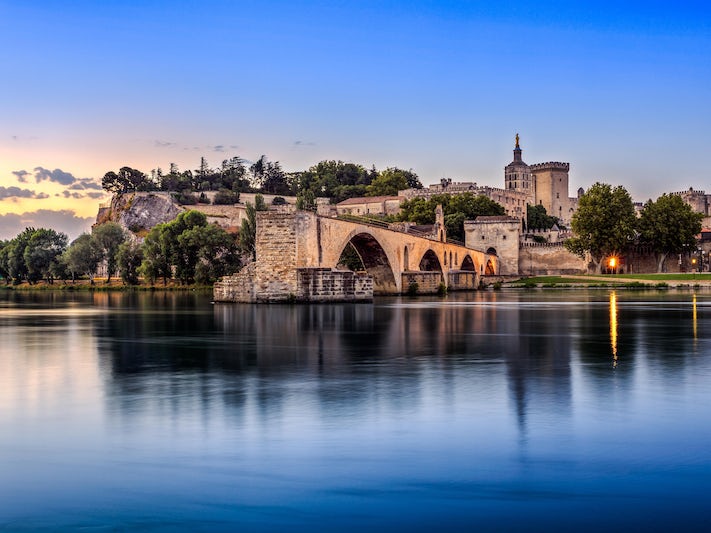 Find Things to Do in Avignon on Viator

Popular Things to Do in Avignon

Palais des Papes: The Palace of the Popes symbolizes the city's past as the spiritual capital of the Western world in the 14th century. Pope Benedict XII and his successor Pope Clement VI built it on a hill overlooking the Rhone River between 1335 and 1364. The nearby Pont Saint-Benezet, a medieval bridge also built by Pope Clement VI, is part of the collection of Roman structures that are registered as a UNESCO World Heritage Site. (Place du Palais, Avignon. Tours available every day, year-round; 11EUR for the palace, 5EUR for the bridge or 13.50EUR for both. Most cruise lines include guided tours, with admission.)

Pont du Gard: A Roman engineering marvel, this ancient aqueduct bridge is a must for history and architecture lovers. It is part of the UNESCO World Heritage Site that includes the palace, although it's located about 30 minutes by car outside the city. The bridge was originally built as an aqueduct to supply water to city of Nimes. (400 Route du Pont du Gard, Vers-Pont-du-Gard. Some cruise lines offer visits to the bridge, with transportation.)

City of Uzes: Uzes is a hidden gem in the South of France -- an ancient city that offers modern amenities while maintaining its Old World charm. It's a perfect day trip for those who seek something more "off the beaten path." (Only a few cruise lines offer Uzes tours. Passengers who wish to visit on their own can make the 45-minute trek from Avignon.)

Wine Tasting in Chateauneuf de Pape: The village of Chateauneuf de Pape is known for its mass production of wine (mostly Grenache). It's the largest appellation in the Rhone Valley; there are more than 8,000 acres of vineyards (farmed organically and biodynamically) and 80-plus growers. (Chateauneuf de Pape wine tasting tours are offered by a handful of river cruise lines.)

Fort Saint-Andre: Another draw for history and architecture lovers, Fort Saint-Andre is a medieval fortress that was a major symbol of power in the 14th century. It had a garrison, court of justice and prison (graffiti carved into the walls by prisoners is still visible today). The fortress, which is approximately a 10-minute drive from the city center, offers a sweeping view from Mont Ventoux to the Alpilles mountain range. (Rue Mont?e du Fort, Villeneuve-les-Avignon. Some cruise lines offer tours to Fort Saint-Andre. General admission is 5.5EUR.)

Natural Region of Camargue: Want to see horses and meet French cowboys? Camargue is a stretch of protected wetlands about an hour from Avignon. It's famous for its wild horses, which -- although are allowed to roam free -- have been trained by local cowboys. The area is also home to flamingoes (rare in Europe), salt fields, rice paddies and vineyards. (Most tours use the nearby town of Aigues-Mortes as an access point.)

Avignon's Street of Dyers: Escape the crowds and take a stroll down Rue des Teinturiers (Street of Dyers). The cobblestone street, shaded by sycamore trees, runs along a small canal with water wheels -- a testimony to Avignon's textile industry past. It's dotted with charming houses, bars and restaurants and more locally known historic landmarks. Toward the end of the street, you can see the Chapelle des Penitents Gris (the chapel is open to the public and free to enter). The street is about a 30-minute walk from the pier.

Places to Eat in Avignon: Avignon is full of restaurants, ranging from budget-friendly alfresco cafes to Michelin-star splurges. A few top picks include Restaurant Kote Kour, Cuisine Chic and Restaurant des Teinturiers. Kote Kour (Rue Mazan), the most affordable of the three, is a gastropub-style joint that serves up everything from steak tartar and mousseline to duck and burgers. Cuisine Chic (Place des Chataignes) is a whimsical delicatessen focusing on French fare (including a lovely spread of desserts). Restaurant des Teinturiers (Rue des Teinturiers) is a contemporary French eatery nested on one of our favorite streets in town. All three offer outdoor seating, serve alcohol and are wheelchair-accessible. Tip: Avignon is big on wine. We recommend asking your waiting for pairing suggestions, to enjoy the "full flavor."