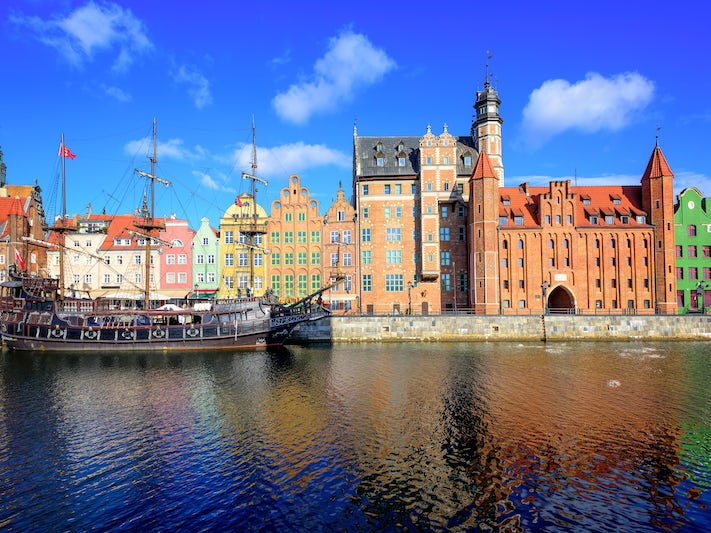 Find Things to Do in Gdansk (Warsaw) on Viator

Popular Things to Do in Gdansk (Warsaw)

Food and Drink in Gdansk (Warsaw)

For Local Specialties: For pierogi mania -- over 15 varieties -- visitors and locals head to Pierogarnia u Dzika; the traditional Polish pockets of dough are filled with mushrooms, cabbage and even sweets such as strawberries. The eatery also serves entrees such as chicken and fresh fish (11 a.m. - 10 p.m., ul. Piwna 59/60).

For a Taste of History: Pod Lososiem is a landmark in Gdansk -- it was established in 1598 and has catered to royalty; menu options include meat, poultry and seafood, but the don't-miss item is "goldwasser," vodka with real flakes of gold (noon - 11 p.m., ul. Szeroka 52/54).

The Roads to Freedom Exhibition (ul. Doki 1, open 10 a.m. - 5 p.m, Tuesday - Sunday) is located right at the Gdansk Shipyard, the very shipyard where Solidarity was born. First, you pass the Monument to the Shipyard Workers' memorial: impressively tall with anchors on top -- a striking tribute to 44 shipyard workers who died in 1970 when military police attacked strikers. Nearby are large-scale news photos from the 1980 strikes, displayed outside against the shipyard's cranes and buildings. It's particularly poignant if you remember the news coverage -- and remember fearing the Russians and Polish military were going to react violently. The inside of the museum displays videos of the protests and the signing of the political accords that started the movement. Walesa and Solidarity are still very much alive (the pen Walesa used is even on display).

Head to the historic city center. St. Mary's Church (also known as Church of Our Lady) was built in 1343 and reached its present, gigantic size in 1502. Inside are an impressive 30 chapels filled with artworks. Some 300 tombs are in the church's floor. The impressive astronomical clock dates to the 1460's (note Adam and Eve at the top). The Town Hall is of Gothic and Renaissance design and dates to the 1330's. The tower was once the tallest in town, and the building is now home to the Gdansk Historical Museum (open 10 a.m. - 5 p.m., Tuesday - Friday), with paintings, historical furnishings and more. Next to Town Hall, the Neptune Fountain -- an elaborate bronze work paying homage to the Sea God -- was completed in 1613 and is the oldest secular monument in Poland. Lovely Artis Court with its white face is where the wealthiest merchants held their meetings and banquets (it dates to the 15th century and the impressive Mannerist fa?ade was added about 30 years later). The Court interior is open to visitors (10 a.m. - 5 p.m., Tuesday - Friday). Considered the most beautiful building in a city of beautiful buildings is The Golden House, decorated with rich carvings, friezes and ornate statues (look up and see Achilles, Oedipus, Antigone and Cleopatra).

Sopot, about halfway between Gydnia and Gdansk, is an impressive beach resort/spa town. We're talking white sand and pretty parks, as well as a casino and spas (including one called Blue Velvet) where you can get modern soothing treatments. The place was known as "Monte Carlo of the North" in the 1920's and has been rejuvenated. Among others, it's the summer spot for Polish celebrities.

Street-side cafes in historic Main City are a good choice. You can enjoy a quick meal and people-watch. ARTUS-BAR (1/7 Dlugi Targ) is right in the middle of everything, near the Neptune Fountain, and offers indoor/outdoor seating and a menu that includes pizza and standard pub fare. Main City has the best shopping, particularly the stores on Dlugi Targ. There may also be vendors selling amber, costume jewelry and other trinkets.