You may also like
Dismiss
Best Expedition Cruises for Australians & New Zealanders
6 Most Exotic Cruises
Best South Pacific Cruises for Nature-Lovers
Where to Find Your Favorite Characters on a Cruise
5 Things to Know About Family Expedition Cruising
8 Reasons To Do Long Cruises with Holland America Line
Best Cruise Travel Agents
Want to Visit Antarctica? This Antarctica Cruise Hack Lets You Save Time and Skip the Seasickness
10 Things You Need to Know About Taking An Expedition Cruise, According to Cruise Critic Editors
When Is the Best Time to Cruise to Antarctica? 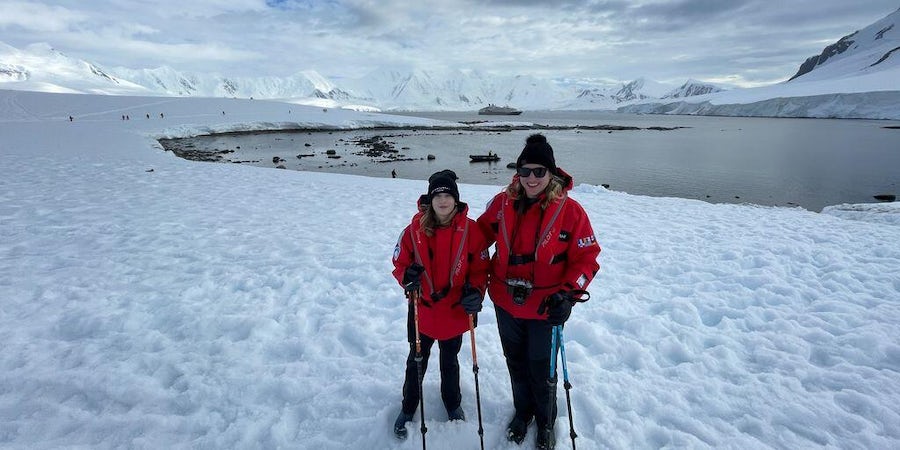 Should You Take Your Kids on an Antarctica Cruise?

When most people imagine family cruises, they probably picture the Caribbean, or possibly Alaska. The question, "Should you take your kids on an Antarctica cruise", isn't something that crops up every day. But this once-in-a-lifetime, bucket-list destination is the perfect place for kids to learn about one of the world's most remote and untouched places in a way that is just not possible in a classroom.

Should you take your kids to Antarctica? Our experience was a resounding 'yes'.

A Cruise to Antarctica Is An Adventure For All Ages

As our Zodiac boat careened through slushy Antarctic waters heading for an iceberg, we approached a magnificent sight: a hulking leopard seal, splayed out on the ice having a morning snooze.

A fierce predator of penguins, the spotted leopard seal lazily raised his head for a moment before plopping it back down. No need to get up for this group of red parka-wearing tourists. He knew we were there, and he also knew we posed no threat. My 12-year-old son, in contrast to the sleepy seal, was beside himself with excitement. Here was a T-rex-faced animal he'd only read about right before his eyes. It was a dream come true.

Our January 2023 cruise to Antarctica on Ponant's luxury expedition ship L'Austral, in partnership with Adventures by Disney, provided these kinds of inspiring moments almost every day, and I was grateful to be by my son's side for them. Whether it was watching penguins cross in front of him in cute little traffic jams using their own penguin highway or climbing to the top of a snowy Antarctic peak together and giving each other high fives, our bond grew even stronger on this trip.

And how we miss those penguins and that singular Antarctica stillness now that we're back home.

This year marks Adventures by Disney's first full summer cruise season in Antarctica, welcoming cruisers as young as 10 (with a recommended minimum age of 12) on the voyages. The company is trying to entice a younger group of travelers to the continent than typically visits. Though some cruise lines welcome children as young as 8 to Antarctica, Adventures by Disney set that age minimum due some of the physical demands of the voyage, which include "wet landings" requiring passengers to occasionally hop out of rubber Zodiac pontoons onto the shore (the boots keep your feet dry).

On our sailing of 161 passengers, about a dozen were under 18, while a previous holiday voyage had a few more kids on board. Ponant's expedition team of nine naturalists works in partnership with Disney Adventure Guides to provide programming that is suitable for all ages, layering science and discovery with just plain fun.

The Educational Benefits For Taking Kids to Antarctica Abound

My top reason for taking your kids to Antarctica is the educational opportunities that await on these expeditions. We had to ask for forgiveness for some school absences, but the learning experiences the children on our voyage had out of the classroom were simply unparalleled.

Not only will your kids learn directly from naturalists about a variety of species (like the day we spotted Minke and Humpback whales in addition to a lone Emperor penguin, a very rare sight for the area of Antarctica we were visiting), you will also have the opportunity to attend on board lectures about the history of Antarctica expeditions, meet people who live on the continent, and more.

With Ponant's typical cruising clientele skewing a bit older, most of the cruise staff we talked to said that families are a welcome change. To accommodate younger cruisers, the expedition team placed a question bowl in the ship's lobby and answered selected questions during the daily briefings, including, "What do penguins taste like?" and "What is the scariest thing you’ve experienced on an expedition?" Lectures were sprinkled in among pajama parties, movies, crafts, and family games.

On an Antarctica cruise, your kids will be exposed to new career possibilities and witness firsthand the precious and delicate ecosystem of our planet -- indelible lifelong lessons. They'll hear new languages, from Spanish in Buenos Aires and Ushuaia, Argentina, to the French spoken by the crew and naturalists.

If, like me, you are concerned about how you or your child might handle the notoriously rough Drake Passage, my observation is that kids aren't any more or less prone to motion sickness than adults. Most youngsters on our voyage, or Junior Adventurers as they are called in ABD parlance, were happily up and playing board games or watching Disney movie marathons in the theater during our trip.

My son took it easy by resting the few days when waters were choppy, but the flexible itinerary allowed for him to do so without missing out. I was glad I talked to our doctor before heading out on the voyage. Prescription scopolamine patches for motion sickness can be used starting at age 12, something that seemed to do the trick for my tween for the most part, and we also had anti-nausea medication in reserve.

Other cruisers made use of Dramamine, ginger, motion bands, and goggles. Fortunately for us, our trip both ways across the passage remained relatively calm, with only a few hours of minor rockiness. Each voyage is different, however, and rougher seas can and do happen. Spending a few days in bed with room service is always an option.

There Are Plenty of Experiences for Kids to Have in Antarctica

Though minors under age 16 can't participate in sea kayaking, all of the rest of the experiences are available for all ages, from going ashore to Zodiac cruises and hiking.

Antarctic expedition hikes can range from lower-grade, 30-minute to one-hour long treks to even longer hikes up steep, snow and ice-covered terrain. Our expedition leader John Frick emphasized that "not every landing is for everyone," and though most of the tweens and teens tackled the most challenging hikes, plenty of people sat them out, too.

If your children are curious and interested in nature, this is an excellent cruise for them, as they'll likely become experts at some of the species only found on the 7th Continent. It's also a great trip for children who are socially inclined. Many of the kids on our voyage, especially a posse of teen girls, became inseparable.

Children should be able to be somewhat independent and flexible in order to maximize their enjoyment. Internet access can be tricky the farther south you travel, so it's also not a trip for screen-obsessed kids (or parents). The notoriously fickle weather in Antarctica, rather than the expedition team, dictates how some of the days might be structured. That means that you might not see that Orca whale you'd hoped to see, or you might spend a day on Zodiacs cruising for wildlife rather than hiking. The upshot is that frequently upended plans lead to rather exciting surprises for those who can be patient.