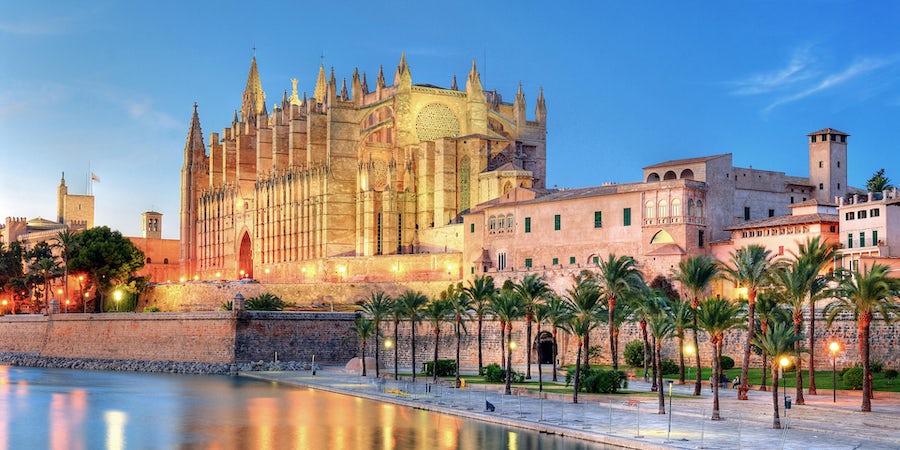 The busiest in the Balearics, the Port of Palma de Mallorca operates six cruise terminals split between two zones, both located in the Porto Pi neighborhood on the southwestern outskirts of Palma. Most cruise ships dock in the first four (Estacion Maritima 1, 2, 3 and 4) which are spread between the two Poniente and Paraires Quays. The fifth and sixth terminals (the latter of which opened in 2017) are found in the Dique del Oeste or the West Dock part of the port, positioned on a peninsular further round the bay.

The Poniente and Paraires Quays section of the port connects directly to the Mallorcan capital by a long marina-front boulevard (Paseo Maritimo) with wide footpaths and a cycle lane. It's around a 10-minute drive to the city centre, or a leisurely 45-minute walk. The Dique del Oeste terminals are that bit farther, and walking is not recommended (especially over the sweltering summer months).

The easiest way to get to the cruise port from Palma de Mallorca Airport is by taxi. There is a taxi rank just outside the main exit, and there's always an abundance of metered cars available throughout the year. It's around a 20 minute drive, and should cost in the region of €25. A cheaper option for small groups of up to six travellers is to organise a private transfer in advance.

Alternatively, the number 1 bus connects directly from the airport. The stop is located just past the taxi rank and tickets cost €5 per person. For cruise terminals 1-4 get off at the 26 Port de Palma stop, and for terminals 5-6 it's the final stop (Escola de Nautica). Expect the journey to taking 45-60 minutes.

Getting There from Palma and Around Mallorca

The port's location puts it within easy reach of most parts of the island, with the majority located within an hour's drive of the Ma-20 ring road that circles Palma. From here it's no more than 10 minutes' drive.

Alternatively, most bus and all train routes terminate at Palma's Estacio Intermodal bus and train station, which is then 10-15 minutes by cab or local bus.

Palma's Hop-on Hop-off bus service also has a stop at the Estacion Maritima.

There are no long term parking facilities at or near the port's cruise terminals. Short term parking is available in front of terminal 2 for a fee for a maximum of two hours. The nearby Porto Pi shopping mall offers two hours free parking.

Taxis are readily available from opposite the Paraires Quay or just outside the Dique del Oeste embarkation hall on days when ships are embarking or disembarking passengers. Fixed fares into the historic centre are €12/14 (day/night) and to the airport €22/25. Taxi tours are also available between one and three hours, for €40/hour.

There are no porters, however there is a service whereby luggage can be left at the terminal and transported to the airport.

All terminals provide ramps and lifts where necessary. There are also disabled toilet facilities in terminal 2.

Embarkation halls at each terminal have at least a small kiosk selling basic snacks and drinks. The main Estacio Maritima (terminal 2) building has two cafes offering hot beverages and light meals, and a souvenir shop. For more extensive shopping opportunities, head to the Porto Pi shopping mall (open 9 a.m. to 10 p.m. Monday to Saturday), a few minutes' walk away offering a large supermarket, range of clothes shops, and a wide selection of eateries.

There's no shortage of seating in each of the terminal buildings, which are all air conditioned. Outside seating, however, is very limited.

Toilet facilities can be found in all terminal buildings, though terminal 5 is post-security.

There are free Wi-Fi connections available in terminal buildings, plus you can rely on decent 4G coverage around the port. Alternatively, other Wi-Fi hotspots can be found in the Porto Pi shopping centre nearby.

Bike hire kiosks are located in and outside terminal 2, which is one of the better ways to explore central Palma. Terminal 2 also has a tourist information desk (open over busier months). A kiosk offering boat trips, excursions, and car hire can also be found outside terminal 2. ATMs can be located in the Club de Mar opposite the main terminal building.