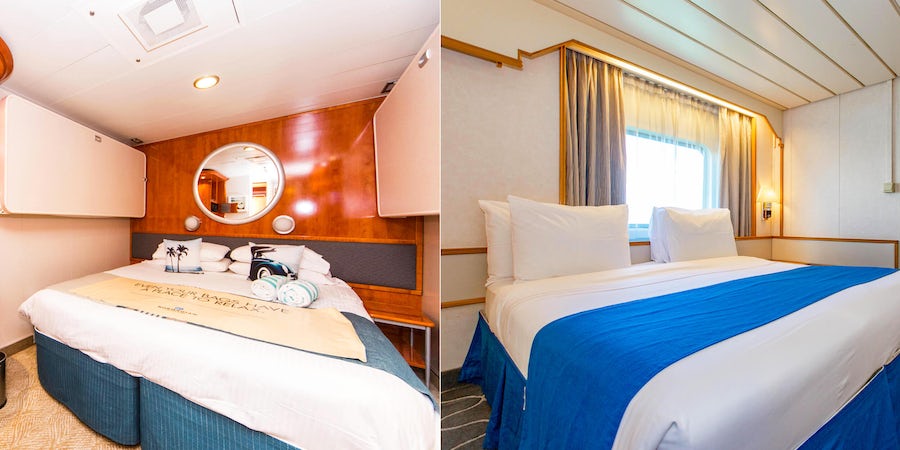 Inside vs. Outside Cruise Cabins (Photos: Cruise Critic)

Inside vs. Outside Cruise Cabins: A Cabin Comparison

With so many types of cruise ship cabins in so many different categories, it can be hard to decide which one is right for you, especially if you're new to cruising. What exactly is the difference between an inside cabin and an outside cabin, anyway? Read on as we compare the differences between interior versus oceanview staterooms, and determine which will serve as your home on the high seas.

Similarities Between Inside and Outside Cabins

When comparing inside versus outside cabins, you will find that both offer beds, bathrooms, desk/vanity combos and closets. You'll also find standard electronics like a phone, a TV, a safe and a hair dryer.

Most staterooms are meant for double occupancy; there are generally two twin beds that can be combined to form a European king (bigger than a standard queen and smaller than a standard king). Cabins in both categories might also offer pulldown beds or pullout couches to sleep additional passengers.

Bathrooms most commonly have a shower-only setup (no bathtubs). Toilets and sinks with mirrors are standard, as are small shelves for storing toiletries. (Complimentary soap and shampoo are often found in dispensers mounted inside the shower or in hotel-sized bottles.)

In most rooms, closet and drawer space is ample. Shelves offer space to store folded clothes and shoes, and nicer garments can be hung in the closet with the provided hangers.

A desk/vanity area, usually offering a large mirror and additional drawer space, is ideal for checking email on your personal electronics, blow-drying hair and putting on makeup.

Differences Between Outside and Inside Rooms

Oceanview cabins offer just that -- views of the ocean. That means these types of staterooms boast either portholes (small, round windows) or picture windows, which let in natural light. The windows don't open, however, so don't assume that an outside cabin will also come with ocean sounds or fresh air. Also be aware that some windows can be obstructed by lifeboats and other ship fixtures.

Related: 8 Things to Know About the Cheapest Cruise Ship Cabins

Inside cabins, meanwhile, offer no windows or natural light at all. For that reason, another major difference comes in the form of price: Interior cabins are almost always less expensive. For the most part, there isn't much of a difference in square footage between the two, but occasionally you might find oceanview cabins on some ships to be slightly larger than their inside counterparts, allowing for additional furniture like couches or chairs.

Outside vs. Inside Cruise Cabins

Ultimately, the decision between inside versus outside cruise cabins comes down to whether you want a window. If you absolutely must have natural light or a way to see your external surroundings from your room, an outside cabin is for you. Otherwise, save yourself some cash, and book an inside cabin -- especially if you don't plan on spending much time in your cabin during the day.

Related: 8 Things to Know About the Cheapest Cruise Ship Cabins