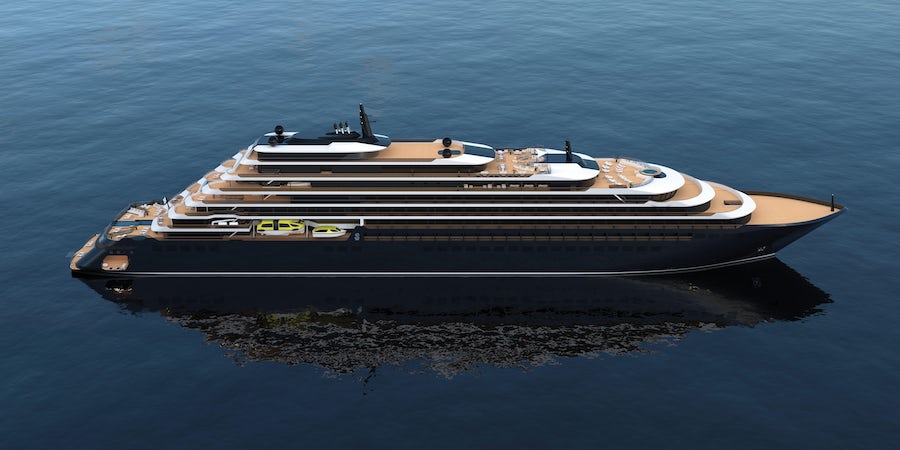 (4:30 p.m. EST) – It's been a long time coming. But the highly anticipated cruise ship from the storied Ritz Carlton hotel brand, the 298-passenger yacht Evrima, will make its first sailing this Saturday, October 15.

Luxury lovers have been waiting for this debut for quite a while, for a few reasons. One, a hotel brand such as Ritz Carlton entering the growing small ship space carries the possibility of people who have never cruised before giving it a try. Four Seasons recently announced that it is also developing a cruise brand, to launch in 2025.

Two, the Ritz Carlton Yacht Collection will allow passengers to use and earn Marriot Bonvoy points. While cruise lines have their own loyalty programs, none have one that directly crosses over with such a well-established rewards program.

Three, the launch of the ship has been delayed eight times. With an original debut slated for February 2020, Evrima suffered from problems first stemming from the Spanish shipyard where it was being to built to supply chain issues due to the COVID-19 pandemic to more strikes.

And finally, the launch is a clear sign that small yacht-style ships are growing in popularity. Blame it on the Bravo TV show Below Deck, if you will, but more companies – besides Ritz Carlton and Four Seasons, Emerald Cruises entered the space this year – are building yacht-style ships that are able to deliver a more personal experience at sea.

The ship’s maiden voyage on October 15 will start in Barcelona and visit Nice, with overnights in Palma de Mallorca and St. Tropez. The line has said that stopping in smaller ports will be a hallmark of its itineraries.

Evrima has 149 suites and will have what the line says is one of the highest staff and space ratios at sea. All rooms have an outdoor terrace and a personal concierge, as well as an espresso machine, 24-hour in-suite dining, and a mini-bar filled with your preferences. The bedrooms have king-sized beds and the bathrooms all have double vanities.

In terms of inclusions, gratuities, drinks, watersport activities and Wi-Fi are complimentary.

Judging by the renderings released to media this week, the ship’s main dining venue is called The Evrima Room. Another restaurant, Talaat Nam, will focus on southeast Asian cuisine and have a sushi bar. The Pool House is the ship’s casual dining area while Mistral is an al fresco grill with a Mediterranean-included menu.

The ship will also have an extra fee specialty restaurant called S.E.A. designed by chef Sven Elverfeld, who runs the Michelin-starred Aqua restaurant at the Ritz Carlton, Wolfsburg, in Germany.

A Ritz-Carlton-inspired spa will be onboard Evrima, along with a salon and barber shop. A fitness studio with cardio and strength machines, as well as classes in yoga and mat Pilates, is also available.

The Marina at the aft is an area where guests can take part in watersports. There are also plenty of cushy lounge seats, according to the renderings.

The Observation Lounge at the top deck has indoor and outdoor space.