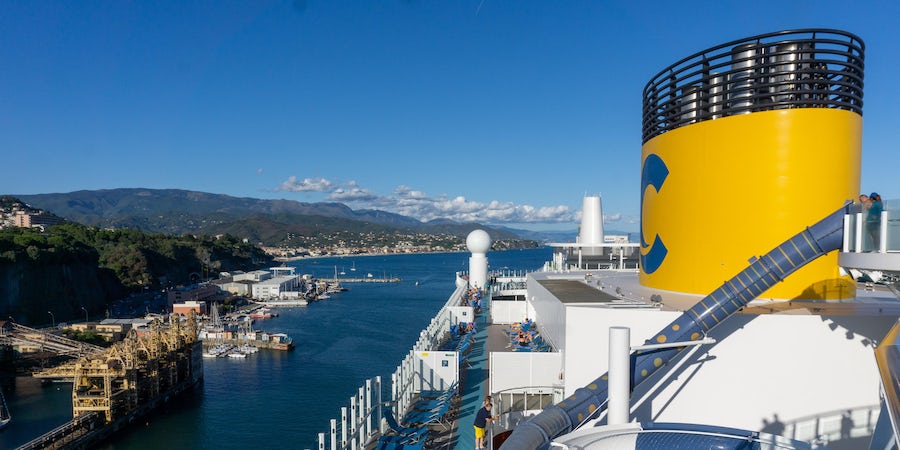 Onboard Costa Toscana: What Can Cruisers Expect from Costa by Carnival

(5:30 a.m. EDT) -- Costa might not be a household name for many North Americans, but the Italian line founded in 1854 has been operating passenger voyages since 1948.

Costa even dedicated one of its past ships, the Franca C., to Caribbean cruising year-round from the United States way back in 1959. But its North American presence has always been irregular. Costa was acquired by Carnival Corporation & plc. in 2000, and the line has had a strong presence in the Mediterranean, Northern Europe and South America ever since.

Now, North Americans are going to have more opportunities to experience Costa closer to home. With Carnival's new "Costa by Carnival" partnership looming on the horizon in 2023, Cruise Critic traveled to the Italian port city of Savona to embark on a weeklong sailing aboard Costa's brand-new flagship, Costa Toscana, to see what the Costa Cruises experience is all about.

Costa Toscana is built upon the same "Excel-class" platform that Carnival's Mardi Gras and P&O Cruises' Iona are patterned from. Not to say that the ship is identical to either one -- Costa Toscana is very much its own ship, and one well suited to the Mediterranean.

Our Cruise Critic member reviews of past Costa cruises are, to be fair, a bit of a massacre. People either love, or loathe, the line and its many differences from what North American cruisers may have grown to expect from a standard oceangoing voyage.

What you might not know about Costa -- what I didn't know -- is how family-friendly the line is. Most people onboard are in their thirties and forties (I've also spotted couples in their 20s), and the vast majority are pushing strollers with infants or leading little toddlers or small children in tow. Lots of lines talk about their family-friendliness; Costa delivers.

Most passengers aboard Costa Toscana come from Italy, France, Germany, and Spain. Native English speakers are last, by far -- most of my tours keep getting cancelled due to lack of English-speaking participants. But many passengers speak at least some English, and all crewmembers are true polyglots, switching effortlessly from Italian to English to French and German.

It's a fun, hip line that's affordable for younger people. And yet, older, more experienced cruisers are well represented, too. No doubt Carnival wants to tap into this by introducing Costa by Carnival in 2023.

And yes, the pizza and pasta, as one might expect, are up to the standard of restaurants on land in Italy. It is perhaps one reason pizza onboard Costa Toscana isn't free of charge -- the quality of ingredients being used is such that there is a modest surcharge to dine in the dedicated Pummid'Oro Pizzeria on Deck 8.

Because of the sheer number of languages spoken onboard (at least four -- Italian, Spanish, French and German are predominant) -- entertainment aboard Costa tends to be very visual and music-based.

In fact, entertainment has been a decided highlight of the Costa experience for its sheer showiness and diversity. Say goodbye to the usual "Tribute to Motown" and "Rod Stewart Songbook" specials that North American lines have been running into the ground for decades, and hello to superb performances that combine classical Italian operatics and tributes to the likes of Jennifer Lopez and Michael Jackson.

The few performance shows that do rely on language are often peppered with enough English to get the gist of what's going on, and these tend to be very visual. If your Italian is no good, you won't have any issue following along with the simple plots, and great performances, from the entertainment team and guest performers.

Even the music in the ship's stateroom corridors reflects a younger audience: you'll hear Basia Bulat, Dido, and Florence and the Machine instead of the tired old muzak employed by many lines. We hope "Costa by Carnival" carries over all of this.

Activities That Run Well into the Night

As Alicia Bridges once sang, "I love the nightlife." And you'll have to on Costa, where things really kick off after 8 p.m. If you're tired of North American lines that wind things down around 10 p.m., Costa is the line for you.

When Costa Toscana docked in Salerno, Italy this week, evening entertainment included Bingo ticket sales from 8 p.m. until Midnight; a Flamenco performance at 8 p.m. and 9:45 p.m.; a Michael Jackson tribute performance at 10:30 p.m.; a live violin concert at 11 p.m.; a Latin-themed performance show at 11:30 p.m., and a silent disco at 12:15 a.m. That's in addition to live music that, in some bars, runs scheduled until two in the morning. Even the burger joint is open until 6 a.m.

Live music is offered throughout the ship and is particularly good. In the Heineken Star Club -- an emerald-green themed pub -- bands perform covers of Hozier and Coldplay instead of the usual cruise staples like Billy Joel and Journey. It is a much-welcomed change of pace and reflects Costa's much younger demographic.

Kid's activities -- which are superb here onboard Costa Toscana -- also run well into the wee hours. There's a Peppa Pig meet and greet for the little ones at 8:30 p.m., a creative arts workshop for kids at 9:30 p.m., and babysitting and Kid's Club programming that runs until Midnight.

On the flipside, Poolside activities on Costa pretty much stop at 6 p.m., and most outdoor bars are shuttered by 7 p.m. All the action after that moves inward, to the ship's multitude of bars, lounges and entertainment venues.

The busiest place aboard Costa Toscana, bar none, is the Kartell Caffe on Deck 8. We're cruising in Italy, after all -- having bad coffee onboard is unthinkable, and Costa Toscana's European clientele drinks the stuff day and night.

This isn't the cardboard-cup-takeaway variety either. Coffee is serious business here. Absolutely no one asks for it in a takeaway cup, and instead, coffee is served up in the European style, to stay in proper cups with saucers and spoons.

I quit caffeine about two years ago, but I make exceptions once per cruise to check out the coffee quality. Otherwise, I drink decaf or herbal tea. The only thing I've ever felt remotely shamed about on Costa Toscana comes to my coffee habits: I cannot bring myself to order a decaf here. I feel like the entire lounge would go quiet and people would start whispering. It's almost sacrilege in Italy to get decaf.

Costa's coffee culture is something I hope comes to Carnival's Costa by Carnival product. Carnival's coffee bar is great, but it is chronically understaffed on nearly every ship. And trying to get coffee to stay, without the ubiquitous blue paper "to go" cup, is almost impossible.

If Costa by Carnival retains Costa's superb coffee culture, it would give MSC Cruises -- the only other big-ship brand to offer a true European coffee experience -- a run for its money.

One of my favorite bars aboard Costa Toscana is the fire-engine red Campari Bar on Deck 7 midships, next to the three-story Colosseo entertainment atrium. Flanked by a three-story wall of glass that extends from Deck 6 to Deck 8, this cool bar serves up all manner of Campari delights, from Campari Negroni's to classic spritz drinks and even creative cocktails -- all made, of course, with this ubiquitous European spirit.

Then, there's the Heineken Star Club aft on Deck 7, serving up draft Heineken, bottled beers, and beer cocktails, not to mention pub bites.

While other Costa ships aren't quite as elaborate as Costa Toscana (many, indeed, were designed by longtime Carnival Cruise Line interior designer, Joe Farcus), it seems a cornerstone of any Costa by Carnival product would be the availability, and promotion, of European-centric cocktails. Otherwise, it's just Carnival on a different ship.

What Won't Be Part of the Costa by Carnival Experience

There are a few things we've found on our first Costa experience that you can bet won't be making the journey across the Atlantic when Costa by Carnival is rolled out next year.

Firstly, dining times here aboard Costa Toscana are decidedly European. Early dinner is 7 p.m. and late dinner is 9 p.m. I'm at a late dinner seating at 9 p.m. Which I like just fine, as I tend to eat quite late at home anyhow. Many North Americans, for whom six in the evening is the ubiquitous dinner hour, would balk at such a time.

Secondly, unless Carnival puts its Costa by Carnival ships through an extensive retrofit, don't expect the cavernous casinos many North American lines have. The casino here aboard Costa Toscana is modestly-sized by big ship standards, occupying just a touch of space on both port and starboard sides of the ship on Deck 7 amidship. Even during the after-dinner run-up, when folks have been drinking and feel Lady Luck is on their side, it is rarely full -- and isn't the dark, smoke-filled den found on North American ships. Instead, it's bright and inviting -- and non-smoking, remarkable on a European ship where smoking is liberally allowed outdoors and on stateroom balconies.

Speaking of, don't expect Costa's generous smoking policy to carry over to North America. You might be able to smoke on your balcony here on Costa Toscana, but probably not on Carnival's Costa by Carnival product.

North American cruisers looking for something different will enjoy Costa -- and no doubt the closer-to-home "Costa by Carnival" product that Carnival Cruise Line rolls out next year, when it temporarily leases Costa Firenze and Costa Venezia and presses them into a new, unique service for North American cruisers.

Will it be a success? Time will tell. But for those who aren't keen on making the long-haul air journey across the Atlantic, Costa by Carnival could be that slice of cruising, Italian-style that some passengers will naturally gravitate to -- and enjoy.