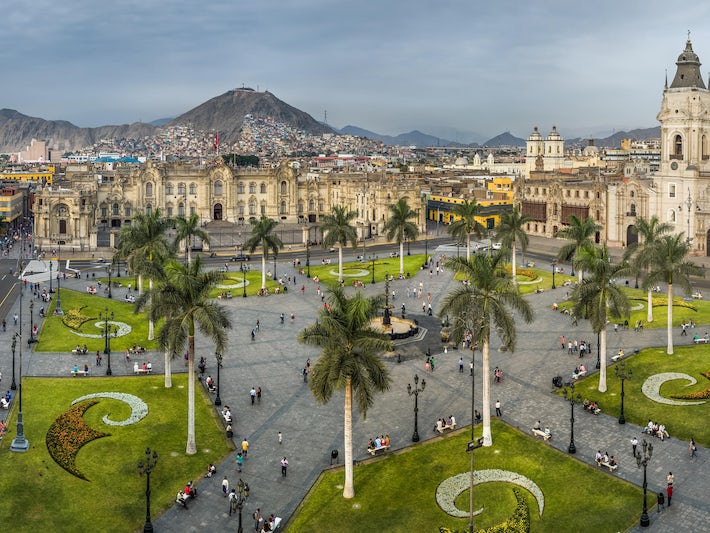 Find Things to Do in Lima on Viator

Popular Things to Do in Lima

Food and Drink in Lima

If there's anything that makes Lima a standout city, besides impressive old architecture and archaeological treasures, it's the cuisine -- perhaps the original fusion food, which is a mix of African, Spanish, Andean, Asian and Pre-Colombian influences. Long ago described by Auguste Escoffier as one of the four great cuisines of the world (third to French and Chinese), Peruvian food remained overlooked outside Peru until recent years when it started to find its place on the global culinary stage, thanks to the success of Peruvian chef Gaston Acurio. His huge restaurant empire and television show have made him a local food hero, and he has put a spotlight on some of the under-the-radar small restaurants that cook great food, whether it's criollo (dishes with African, Spanish, Chinese and Andean influences), chifa (a Peruvian-style Chinese food) or ceviche.

Peru's Pacific coastline produces more than 400 varieties of fish and 400 species of shellfish, so you can't go wrong with seafood in Lima -- particularly the national dish, ceviche (chunks of raw fish and/or shellfish, sliced red onion and minced aji chile, tossed in lime juice), which can be found at a cevicheria, a restaurant concept that began in Lima in the mid-80's and took off. There are now more than 2,000 cevicherias in Lima alone. And that's because Peruvians have a strong emotional connection with ceviche - it's the dish they want to share with family and friends, whether as a remedy to lift their spirits or to celebrate.

Chifa Capon (Ucayali 774, Central Lima, 427-2969) remains one of the best restaurants in Chinatown for chifa, a blend of Cantonese and Peruvian cooking.

Lar Mar (Avenida La Mar 770, Miraflores, 421-3365), Gaston Acurio's ceviche hotspot stands out among 2,000 other cevicherias in Lima, offering a contemporary spin on ceviche, tiraditos (think Peruvian sashimi) and other Peruvian specialties, not to mention the upbeat Latin music that plays in the background.

Trattoria Dei Prati (Cantuarias 239, Miraflores, 242-3382), down the street from Gaston Acurio's flagship restaurant, turns out delicious northern Italian cuisine. After learning to cook in Veneto, Lulu Prei returned to Peru and turned her former home into this intimate, two-room restaurant.

Chez Wong (Enrique Leon 114, La Victoria, 470-6217) is Javier Wong's 10-table Asian-fusion cevicheria inside his home. He serves lunch only, and reservations are a must. There's no menu, but trust Chef Wong because he's one of Lima's star chefs. He will decide what to make for you and will never make it again. The first course will be a ceviche, and the second dish will be a hot seafood entree, cooked in a wok with Chinese vegetables.

Restaurant Sonia (Calle Santa Rosa 173, Chorrillos, 467-3788) was one of the first cevicherias in Lima. Sonia Bahamonde does the cooking, and her husband, Fredy Guardia, catches the fish, so you can count on ceviche with sushi-quality fish.

Evening Dining
L'Eau Vive (Ucayali 370, Central Lima, 427-5612) is run by an order of French nuns and set behind the massive door of an 18th-century mansion. They turn out wonderful French and Peruvian dishes with a set menu, and most nights, the nuns come out and sing Ave Maria just before closing at 9:30 p.m.

Astrid y Gaston (Cantuarias 175, Miraflores, 242-5387) is, hands-down, the best restaurant in Lima, run by Gaston Acurio and his wife Astrid, who turn Peruvian criollo cuisine into an art form in a colonial-style building with elegant interior.

Restaurant Huaca Pucllana (General Borgono block 8, Miraflores, 445-4042) sits amid the ruins of Huaca Pucllana, an archaeological site that dates back to 200 A.D., which is lit up at night. Take a table on the terrace for views of the pyramid and adobe walls, and dine on criollo cuisine.

Jose Antonio (Bernardo Monteagudo 200, San Isidro, 264-0188) has clocked 30 years as a favorite in Lima, serving gourmet criollo cuisine with a backdrop of rustic decor that recalls a conquistador's ranch.

Central Lima: Make sure to visit the 117-block UNESCO district, which Pizarro designed to be built, block-by-block, like a chessboard of squares, featuring 400-foot-long blocks with 40-foot-wide streets. Start at the impressive Plaza Mayor, surrounded by Lima Cathedral, the Archbishop's Palace, City Hall, Government Palace and the Club of the Union (a favorite lunch spot for politicians and business people). In the mid-90's, the mayor of Lima started an Adopt a Balcony program to save, restore and rebuild hundreds of balconies. Although the process is still underway, you can find some of the most beautiful balconies on a mid-16th century home known as Casa del Odior (just off the Plaza Mayor) and the Archbishop's Palace. The palace is connected to the Baroque-style Lima Cathedral, where a small side chapel has the tomb of Pizarro.

The gem of Central Lima is the 17th-century San Francisco Monastery and Church, a few blocks from Plaza Mayor at the corner of Jr. Ancash and Jr. Lampa. The monastery has a serene courtyard and 17th-century library with 25,000 volumes and 6,000 parchments. Beneath the church, catacombs (discovered in 1951) contain the bones of 70,000 people, sorted by body part -- skulls, femurs, etc. Tours of historic Lima also take in Lima's grandest European-style square, Plaza San Martin. (Editor's note: The easiest and safest way to see some of the city's original homes and government buildings around the Plaza Mayor is to take a guided excursion.)

Miraflores: One of the best residential neighborhoods with a fair share of shops and restaurants, Miraflores is also a great place for getting around on foot. From Parque Kennedy, you can walk to the craft markets on Avenida Thouars, and take a 20-minute stroll down Avenida Larco to the Pacific Ocean. When you reach the end of Larco, cross over to the malecon, and take the stairs down to the cliffside Larcomar shopping center. In the center of Miraflores, surrounded by residences, you'll find what's probably Lima's oldest and most surprising site, the mud-brick fourth-century pyramid ruins of Huaca Pucllana, built by the Lima culture 900 years before the Incas constructed Machu Picchu.

Rafael Larco Herrera Museum: If you only have time for one museum, book an excursion to the Rafael Larco Herrera Museum, located in an 18th-century mansion, built over a pre-Columbian pyramid. The Larco has one of the world's largest collections of pre-Columbian art and is most well-known for its 45,000-piece compilation of erotic pre-Columbian pottery -- so much they don't have space to exhibit all of it. But, after seeing the main collections, you can wander through storerooms of amazing pottery stashed in floor-to-ceiling glass cases. Afterward, get a bite at Cafe del Museo, whose menu was created by Gaston Acurio.

Museum of Peruvian Gold: Many cruise lines offer excursions to the Museum of Peruvian Gold, located about 20 to 25 minutes from Miraflores in the residential neighborhood of Monterricco. The private collection contains gold artifacts from pre-Columbian times to more recent centuries and includes jewelry, funerary masks, sacrificial knives, swords and statuary discovered at archaeological sites around Peru. Years ago, a scandal surfaced at the museum -- the gold collection included a considerable number of fakes. Even though those have been removed, the museum is still packed with golden treasures that are the real deal, representing Peru's many pre-Hispanic cultures.

Shopping: While there are handicraft markets with dozens of sellers on Avenida Petit Thouars in Miraflores, and, in San Isidro, some high-end boutiques on Miguel Dasso and shops of local designers along 12 blocks of Avenida Conquistadores, some of Lima's most stylish boutiques are scattered about in residential areas, often hidden away behind unmarked doors. Case in point: For exquisite jewelry, visit Anna Dannon (Alvarez Calderon 130 #2 in San Isidro; 421 2039) and Lorena Pestana (Calle General Borgono 770, Miraflores; 446 4033). In Barranco, there are two wonderful stores inside old mansions: Mari Solari's stunning craft boutique is called Las Pallas (Calle Jajamarca 212; 477-4629), but there's no sign outside; the same goes for Dedalo (Paseo Saenz Pena 295; 477-0562), hands-down one of most interesting stores for accessories, eclectic fashion, objets d'art, things for the home and wooden toys -- each room of the home has a theme. When you're done shopping, there's a lovely terrace in the back for cappuccino drinks, cookies, wine, tasty sandwiches, pasta and salads.

National Archaeological Museum: Learn a bit more about Peruvian history at the National Archaeological Museum Located in a colonial mansion that was once home to Jose San Martin and Simon Bolivar -- Peru's leaders for independence -- this museum has an enormous collection of pre-Hispanic art and relics, including paintings, pottery and well-preserved mummies and funerary bundles that have been opened up. Most of the exhibits are labeled only in Spanish, so it's best to hire one of the museum's English-speaking guides if you don't speak Spanish.

Barranco: On the southern end of the bay, Barranco's wide, leafy streets, lined by graceful colonial mansions, recall its reign as the summer playground for aristocrats in the 19th century. Renovation is bringing color and style back to this bohemian zone that's now known for great nightlife, a few art galleries and two of Lima's most interesting shops (see shopping section above). It's home to artists and writers, including famed novelist Mario Vargas Llosa. Make sure to walk over the Bridge of Sighs, which spans a bougainvillea-lined walkway that ends at a lookout spot above the sea -- there's a myth that first-timers who hold their breath while crossing this bridge will be granted a wish.

Pachacamac: About 20 miles south of Lima in the Lurin Valley, Pachacamac, a coastal archaeological site, dates back to the Wari culture (200 to 600 A.D.). The Waris left their fish frescoes, pyramids (only a few of the 17 identified have been excavated thus far) and temple to the god Pachacamac, but much later, the Incas arrived and built a second Temple of the Sun (the other being at Machu Picchu).

Caral: If you've got an overnight in port or are doing a pre- or post-cruise stay in Lima, consider a day-trip to see the 4,700-year-old ruins of Caral (130 miles northeast of Lima), a 165-acre site where adobe-brick pyramids, circular plazas and amphitheaters are still being excavated. The largest pyramid stands 60 feet in height and has a 500-square-foot base. Caral's official English-speaking guides share fascinating details on the findings and explain why this civilization is important beyond its age. Just last June, Caral was named a UNESCO World Heritage Site. Because this is an all-day outing (a 3 to 3.5-hour drive from the pier in Callao to Caral), it's best to sign up for an organized tour, whether independent or ship-sponsored.