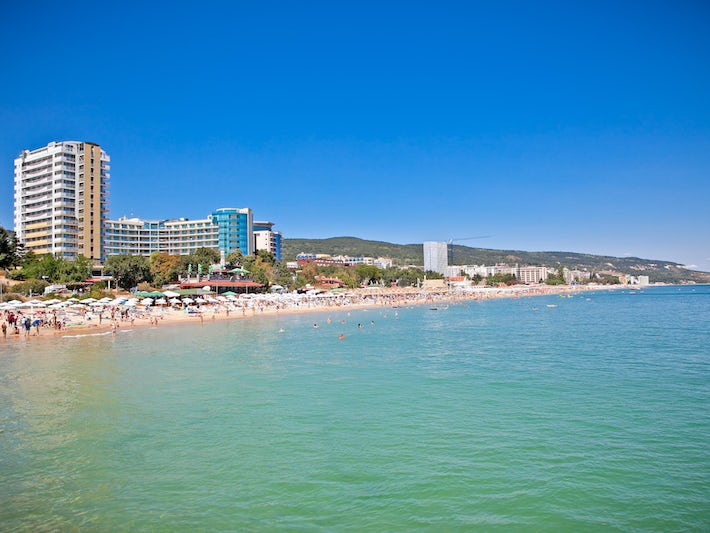 Find Things to Do in Varna on Viator

Popular Things to Do in Varna

Food and Drink in Varna

Dining in Varna is quite affordable; expect to pay less than 15 leva per person for a decent lunch of local fish, spicy Serbian sausage and bread. Chardonnay costs about 15 leva a bottle, and cocktails are about 3 leva each. Be sure to take enough local currency to pay your bill, as restaurants won't take credit cards, and you're less likely to get overcharged if you use the local cash.

You'll see plenty of beach restaurants as you stroll through Sea Garden Park, and you'll find many more eateries in town. All are open from noon until at least 3 p.m. (usually later when a cruise ship is in port).

With time at a premium, we lunched al fresco at a beach bar between sea dips (and spotted several other passengers doing the same thing). If you've the time and inclination to go for a restaurant lunch, here are a couple of suggestions.

For a gourmet lunch with a twist, try Mr. Baba -- a fish restaurant, set in an old galleon right on Varna's South Beach waterfront. It serves a range of European and Bulgarian dishes and some fabulous patisserie. (Tel. 052- 614- 629)

For a quick bite, Godzila may be a chain restaurant, but it's great for a quick bite or a substantial, yet casual, lunch. It's famed for its inch-thick pizzas and huge, tasty salads. There are two in downtown Varna, near Nezavisimost Plaza -- at 66 Kniaz Boris I and 37 Maria Louisa. The latter has an outside patio. (Tel. 052-604-469)

Try a Sea Breeze -- a mix of vodka, black currant and grapefruit juice -- at the waterfront Cafe Pico, located about 400 yards from the dockside.

Glorious white-sand beaches -- with evocative names like Gossip Beach and Atmosphere Beach -- lie a mere 400 yards from the dockside. Beach restaurants will have clean toilets you can change in (though they charge a half-leva entrance fee).

Alternatively, there are a few blue-painted, tin changing cubicles on stilts, scattered along the beach to preserve your modesty. Even if you just plan on sightseeing and shopping, take your swim wear along. Varna gets extremely hot in summer, and a refreshing dip en route to the ship will seem like an excellent idea after a steamy walk.

The Archaeological Museum, a 25-minute cab ride from the dock, has more than 55,000 exhibits dating from the Stone Age. The vast collection includes ancient tombs, golden treasures more than 6,000 years old and some examples of the oldest processed gold in the world. It's open from 9 a.m. to 5 p.m.

The Roman Baths are another close-to-the-ship attraction. The ruins of the Roman thermal baths, once the largest Roman public building in Bulgaria. Enough of the complex has been excavated to make it an impressive sight. From the ship, turn left as you enter the Sea Gardens. The baths are open from 9 a.m. to 5 p.m.

The Golden Sands Resort, roughly an hour's ride from the port, is a great place to take youngsters, as it's the largest beach resort in Bulgaria. It has all the ingredients for a great day at the seaside, including miles of beautiful sand beaches, a lively promenade that's lined with cafes and restaurants, fairground booths and even donkey rides. It's open 9 a.m. to 9 p.m. in summer and is free to explore, though (obviously) rides and booth offerings cost extra.

The Aladja Monastery, near the Golden Sands Resort, is made up of a series of caves, set 120 feet up on a cliff face; it was home to early Christian hermits in the sixth century. The monastery consists of the monks' cells and a small church, in which you can still see some of the colored wall paintings.

The Cathedral of the Virgin Mary, a 25-minute cab ride from the dock, is worth seeing for its ornate bishop's throne and icons; its fine, stained-glass windows and distinctive, onion-shaped domes; and the wonderful views over the city from its 133-stepped bell tower. It's open 8 a.m. to 8p.m. When you've finished, check out the nearby flea market.

For a bit of history -- or to escape the hot sun with an indoor activity -- Varna offers several other interesting museums. Walkable from the Sea Gardens is the National Maritime Museum (open 9 a.m. to 5 p.m.). Or, take a taxi to the center of Varna to visit the Museum of Art and History, which has artifacts and jewelry that date back to 5,000 B.C., as well as the Ethnographical Museum, a period house that recreates life as it was lived in the city in the 1800's.

A good place to start a city walking tour is Nezavisimost Square. Take a short cab ride from the pier to the square, and from there, you can walk to the Roman fortress wall, Round Tower and Opera House.