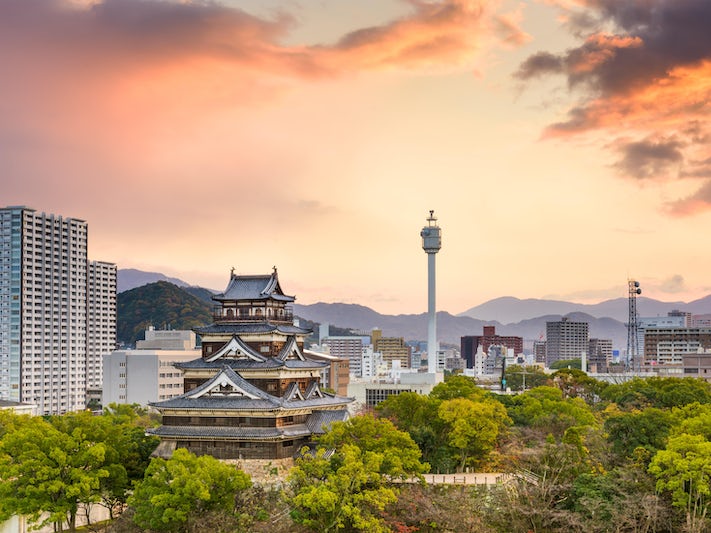 Find Things to Do in Hiroshima on Viator

Popular Things to Do in Hiroshima

Food and Drink in Hiroshima

Both Hiroshima's city center -- particularly along the shopping arcade -- and the pedestrian lanes on Miyajima Island offer an abundance of moderately priced eateries and snack bars. Oysters, grilled in their shells and sprinkled with lemon juice, make a most tasty snack. Various seaweed concoctions are also great purchases, and free samples are readily available. I'll try anything once, but I'll have more oysters, please. Cuttlefish and octopus on sticks, dipped in one of several sauces, are additional snacks. Restaurants with pictorial menus are easy to navigate, and people seated next to you may offer suggestions, if only by their example. Nearly all meals come with rice or noodles, often attractively presented on a lacquer tray. Candy and pastries, some made right on the spot in small storefronts, round out the meal.

Just off the east end of the Hondori Arcade, more than a score of small restaurants (Okonomi-mura) are located on the second through fourth floors of the Shintenchi Plaza Building, just to the rear of Parco Department Store. The atmosphere is intense, so have a look around first, eyeing the places that either have English menus or photo menus. The specialty here is Hiroshima-yaki, egg-based pancakes, made with buckwheat noodles (soba) and fried eggs.

Two blocks south of the Peace Park, one floor up, Kinchai-ya -- in the Clover Building, a former warehouse -- offers an organic buffet for lunch and dinner. Choosing your meal is easy.

Peace Memorial Park and Museum are the main attractions. Allow three to four hours to properly take in the outdoor sites and indoor exhibits (with time for contemplation afterwards in the leafy park).

The most prominent structure is the A-Bomb Dome, located just across the river from the park. Built in 1915 as the first western-style brick building, it served as the industrial promotion hall for a prosperous city. The atomic bomb exploded 2,000 feet above the building and instantly killed everyone inside. In 1996, its stabilized ruins were declared a UNESCO World Heritage Site, a poignant reminder, much like the ruined Kaiser Wilhelm church tower in Berlin.

In the park itself, there are memorials with the names of all the known victims, a grave of unknown persons, an eternal flame that will be extinguished when the last nuclear weapons are destroyed, a peace bell and the most moving -- the Children's Peace Memorial. A young girl named Sadako developed leukemia at age 12, about 10 years after the bomb was dropped; according to an old Japanese custom, if she could fold 1,000 paper cranes, her wish to live would come true. While she never quite made the full count, her classmates finished the task, and others continue to make them to this day.

Within the museum complex, a city model and photos show Hiroshima -- including the military defenses that were mounted to counter the expected land invasion -- before the bomb. As the city had not been previously bombed, Hiroshima was chosen so American scientists could observe the A-bomb's full effects. One set of photos shows burn victims immediately after the bomb was dropped, and display cases contain a burned school uniform, bicycle, bottles and dishes. An exhibition of children's drawings reveals what they saw in the initial days after the attack. Most exhibits are labeled in English.

In an adjacent building, a hall of remembrance contains the victims' names and memories. Moving first-hand accounts include not only those of Japanese people, but also that of an Australian prisoner of war, who worked in a Hiroshima factory at the time of the bombing. About 100,000 survivors are still living, but they are dying at the rate of about 5,000 per year.

It's an easy walk from the park to Hiroshima-jo, just north of the bustling city center. Also known as Carp Castle, it was first constructed in 1589 but was mostly dismantled following the Meiji Restoration and then rebuilt in an attractive moat/lake setting after the war.

Hijiyama-koen, a park -- located on an axis east of the shopping arcade and south of JR Hiroshima Station -- offers the Hiroshima City Museum of Contemporary Art, featuring works by Japanese and international artists. Cherry blossoms abound in the spring.

Miyajima Island is the hilly and heavily wooded setting for not only one of Japan's most revered shrines, first erected in 593, but also for a fishing industry and oyster farming. Seventy percent of Japan's bivalves are raised here, and they make a very popular snack item. The Japanese flock here in the thousands, so your presence will form a tiny, foreign minority.

Most prominent, the lovely 19th-century torii (a red-orange Shinto shrine gate) sits in the water as a symbolic entrance to the Itsukushima Shrine, a wooden complex mostly built out over the water. In the Shinto sanctuary, there are spirits, rather than statues, and Japanese kneel, toss a coin, clap twice and make a wish. Buddhism, borrowed from India via China and Korea, is also a part of the religious mix, as are Chinese architectural features that have been adapted to Japanese tastes. In addition, there is a stage for performances; a treasure house with 12th-century Buddhist scriptures; a five-story pagoda, atop a knoll; and temples, dating from the 13th to 15th centuries, dotting the hillsides.

Along its perimeter, the island offers numerous walking paths to seaside beaches and parks and into the hills. For the best panorama, follow the signs to Misen, a 1,730-foot peak, best reached by using a two-part cable car. Getting off, there are deer and monkeys to amuse you and a 15-to-20-minute walk to the top. There are views in all directions. Allow an hour to retrace your steps if entirely on foot.