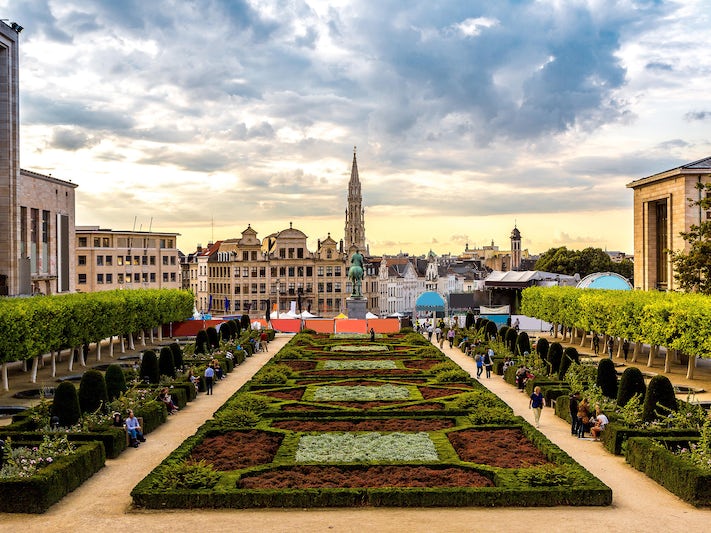 Find Things to Do in Brussels on Viator

Popular Things to Do in Brussels

Food and Drink in Brussels

Belgium's cuisine is best known for a number of signature dishes: moules (steamed mussels), frites (fries, dipped not in ketchup but mayonnaise) and, of course, gaufres (waffles), which are warm and delicious whether served with powdered sugar, chocolate, fruit or ice cream. You'll also want to save room for handmade chocolates and Belgian beer.

Belga Queen: Its high ceiling and cavernous dining area might make you feel like you're sitting in a train station rather than a restaurant, but Belga Queen, housed in a converted bank, is one of Brussels' prime spots for fine dining. The focus is on seafood (there's an extensive oyster bar) and local Belgian ingredients. For lunch, the fixed-price menu varies each day; recent offerings included a first course creamy garden bean soup with smoked salmon and an entree of beef stew with gueuze (a type of Belgian beer), glazed carrots and mashed potatoes. (32 Rue Fosse aux Loups; 32-2-217-2187; open daily, 12 to 2:30 p.m.)

Chez Richard: Tucked in the midst of pricy sidewalk cafes along Place du Grand Sablon, this dimly lit, cozy neighborhood hangout is where beer and conversation flow freely. The unpretentious fare (quiches, salads) is tasty and reasonably priced. Plus, every weekend between October 1 and April 30, the eatery puts out an oyster bar spread. (2 Rue des Minimes; 32-2-512-1406; open Monday to Saturday, 7 a.m. to 3 p.m.; Sunday, from 9 a.m.)

Belgaufra: Sampling a Belgium waffle, either as a light lunch or a sweet snack, is a necessity when visiting Brussels. This popular family-owned chain -- its tongue-in-cheek motto is "Probably the best since 1950" -- has outposts throughout the city that are easily recognizable by the yellow cartoon logo. (Multiple locations, including Rue Neuve 102; 32-2-217-7180. Hours vary.)

'T Kelderke: A coveted seat on the terrace on a sunny day allows for a great view of the Grand Place. But even if it's cloudy, step inside this 17th-century vaulted cellar to sample traditional Belgian cuisine, including mussels, eel in herb sauce and mashed potatoes with sausage. (15 Grand Place; 32-2-513-7344; open daily, noon to 2:30 p.m.)

A La Mort Subite: This popular spot is especially busy at night. Opened in 1928, the interior manages to feel both crowded and large, with tables and chairs tightly pushed together into three rows in a room that seems vast with its rising columns, high ceilings and arched mirrors. The diverse crowd -- including businesspeople in work attire and students in casual garb -- is served by wait staff wearing white shirts and black vests, which adds a formal air to the place. But don't worry, as it's not stuffy: Some of those servers sing as they carry drinks, including the bar's namesake brew. (Rue Montagne aux Herbes Potageres 7; 32-2-513-1318; open most days, 11 a.m. to 1 a.m.)

Delirium Cafe: This popular -- and often loud and crowded -- bar offers more than 2,000 different beers from 60 countries. The name refers to the Delirium Tremens, the flagship product from the Huyghe Brewery in East Flanders. The bar's pink elephant logo is taken from the beer's label. (Impasse de la Fidelite 4; 32-2-514-4434; Open daily until 4 a.m.)

Belgium has a well-deserved reputation for its beers, many of which were originally -- and still are -- brewed by Trappist monks. Whether your tastes tend toward a strong Flemish sour brown ale, a yeasty wheat beer or a fruity lambic, you're sure to find something that suits.

Grand Place: The heart of Belgium's historic district is the breathtaking Grand Place, a cobblestone square surrounded on all sides by elegant Gothic and Baroque buildings -- including the massive 13th-century Hotel de Ville (town hall). With a number of sidewalk cafes, this square is one of Brussels' prime people-watching spots, and during the summer it's colorfully carpeted by a large flower market. Also on the square is the Maison du Roi, a museum that chronicles Brussels' history and even includes a collection of costumes for the Mannekin Pis, the city's most famous statue. (Grand Place; 32-2-279-4350; open Tuesday to Sunday, 10 a.m. to 5 p.m.)

Ilot Sacre: Adjacent to Grand Place is Ilot Sacre, a neighborhood of narrow medieval streets whose charm is only partially dimmed by the many souvenir shops that have taken over the area. Shoppers should head for the Galeries Royales Saint-Hubert (between Rue du Marche-aux-Herbes and Rue de l'Ecuyer), a grand neo-Renaissance gallery filled with jewelry stores, upscale cafes, chocolatiers and bookstores.

Mannekin Pis: He might be only 22 inches tall, but the Mannekin Pis has become one of Brussels' most enduring symbols. This bronze statue of a little boy urinating into a fountain dates from 1619 and can occasionally be seen dressed in costumes made especially for him (the first such outfit was a gift from King Louis XV in 1747). If you like the Manneken Pis, don't miss his female counterpart, Jeanneke Pis (east side of the Impasse de la Fidelite) or his canine counterpart, the Zinneke Pis (Rue des Chartreux and Rue du Vieux-Marche-aux-Grains) -- a bronze statue of a peeing dog. (Rue de l'Etuve)

Atomium: Another iconic symbol of the city is the Atomium, constructed for the 1958 World's Fair. This 335-foot-tall structure is a collection of nine silver spheres, what an atom would look like if multiplied 165 billion times. Five of the spheres are open to the public today, with temporary exhibitions and a multimedia light show. A restaurant on the highest level offers an amazing view and the food, while on the more expensive side, is good, too. (Atomiumsquare; 32-2-475-4777; open daily, usually between 10 a.m. and 6 p.m., last ticket sold at 5:30 p.m. Shorter hours in place during the December holidays.)

Notre Dame du Sablon: Ornate Gothic architecture and brilliantly colored stained-glass windows make the 16th-century Notre Dame du Sablon one of Brussels' most beautiful churches. After your visit, you can sit and relax in the tranquil gardens of Place du Petit Sablon or enjoy coffee at a sidewalk cafe overlooking Place du Grand Sablon; both squares are adjacent to the church. (Rue Bodenbroek 6; 32-2-511-5741; open Monday to Saturday, 9:30 a.m. to 5 p.m.; Sunday, 1 p.m. to 5 p.m.)

Cathedrale Saint-Michel et Sainte-Gudule: Construction of the massive cathedral began in the early 1200s, but was not completed until some three centuries later. Visitors can wander through the present-day Gothic nave and then head underground to see the remains of the 11th-century Romanesque church over which the current structure is built. (Place Ste-Gudule; 32-2-219-6834; open Monday to Friday, 7 a.m. to 7 p.m.; Saturday, 8:30 a.m. to 3:30 p.m.; Sunday, 2 p.m. to 7 p.m. Hours vary in winter.)

Museums: Brussels is home to dozens of museums addressing everything from art to natural history to folklore. One new and economical way to see many of them is by purchasing a Brussels Card. Passes are sold as 24-hour, 48-hour or 72-hour cards. Once the card is activated, the user can visit 31 of the city's major museums. The card is also good for discounts for certain tours and at restaurants, bars and stores. Visitors can purchase their cards via the internet before their visit or at two city tourism offices. (Rue Royale 2; 32-2-513-89-40; open daily, 9 a.m. to 6 p.m. Closed 12/25 and 1/1.)

Less formal works of art can be found at the museum that's part of the Belgian Comic Strip Center. Permanent exhibits look at the art and history of comics while changing displays feature the art of current comic artists. (Rue des Sables 20; 32-2-219-1980; open daily, 10 a.m. to 6 p.m.) Two of the city's newest museums look at more recent art and still-living artists. The Millennium Iconoclast Museum of Art aspires to be the city's defining modern art museum. The museum opened in April 2016. Its first exhibition featured the work of four American street artists. Its permanent collection includes works by Steve Powers, Todd James and Swoon. (Quai du Hainaut; 39-41-32-47-261-0351; open Wednesday to Sunday, 10 a.m. to 6 p.m.) The Art & Design Atomium Museum (ADAM) is affiliated with the nearby Atomium. The museum features 20th- and 21st-century design, including a permanent collection of more than 2,000 plastic items. (Place de Belgique 1; 32-2-669-4929; closed Mondays and limited hours during winter holidays, regular hours are 10 a.m. to 6 p.m.)

The cure for the art museum fatigue that plagues many visitors to Europe is the unique Musical Instrument Museum. This is a place where the exhibits are not only seen but also heard; included in the cost of admission is a headset that plays a sample from each musical instrument as you step in front of it. You'll hear and see both familiar instruments (violins, harps, guitars) and more foreign ones -- like a gigantic Tibetan mountain horn or a carved wooden fish totem from Vanuatu. (2 Rue Montagne de la Cour; 32-2-545-0130; open Tuesday to Friday, 9:30 a.m. to 5 p.m.; Saturday and Sunday, 10 a.m. to 5 p.m.)

Art Nouveau Quarter: Though Brussels' historic core dates back hundreds of years, the area features the architecture of a more modern era. Victor Horta, one of the leaders of the Art Nouveau movement, once lived and worked in Brussels' St. Gilles neighborhood, and, today, his house has been transformed into the Horta Museum. The elegant rooms feature curved lines, stained-glass windows and a dramatic main staircase. There are a number of other Art Nouveau residences in the surrounding neighborhood, so be sure to leave time for a quick stroll after you visit the museum. (25 Rue Americaine; 32-2-543-0490; open Tuesday to Sunday, 2 p.m. to 5:30 p.m.)

Parc de Bruxelles: Join the locals for a stroll through this park's neatly manicured flowerbeds -- or consider an afternoon nap in the grass. Classical statues, colorful blooms and several lovely fountains make this a serene place to rest after a long day of sightseeing. (236 Rue Royale; 32-2-218-3732; open daily, 8 a.m. to 8 p.m. in summer and 8 a.m. to 5 p.m. in winter)

Shopping: The city's finest antique stores can be found in the neighborhood surrounding Place du Grand Sablon -- and if you're in town on a weekend, don't miss the antique market held on the square in front of Notre Dame du Sablon. If you'd rather take home a little piece of Belgian haute couture, head for Avenue Louise, a major shopping artery packed with chic boutiques and high-end department stores.

Beer Mania: Belgium is, of course, also known for its beer. More than 400 different brews are for sale at the city's Beer Mania, including the shop owner's own "Mea Culpa" brand, so named as to apologize to his wife for all of the time he spent developing his blend. The shop also sells products online, meaning most people can order a shipment once back in the U.S. (174-176 Chausse de Wavre, 32-2-512-1788; Monday to Saturday, 11 a.m. to 9 p.m.)