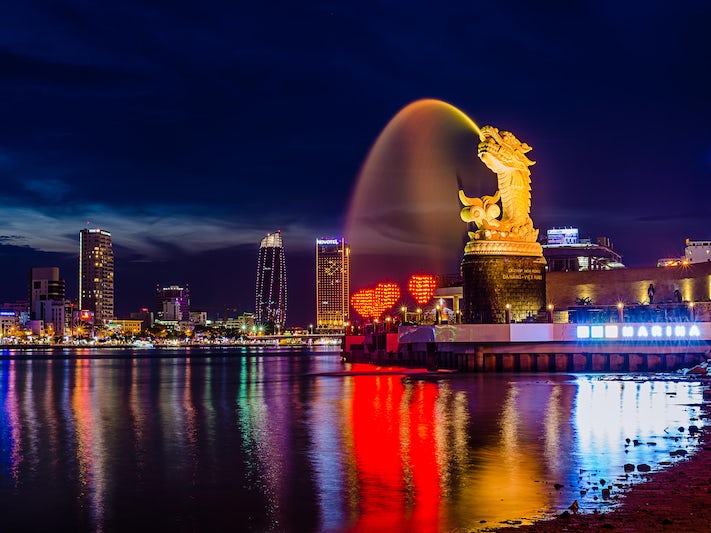 Find Things to Do in Da Nang on Viator

Popular Things to Do in Da Nang

Food and Drink in Da Nang

The Vietnamese love seafood, but chicken, beef, pork, vegetables and fruit are common in their dishes. Their cuisine is considered very healthy and non-fattening, which might explain why most of the people are thin, despite the fact that they seem to eat all day long. Dishes are often flavored by fish sauce made of fermented anchovies and spiced with lemongrass, ginger, Vietnamese mint, coriander, Saigon cinnamon, bird's-eye chili, lime and fresh basil leaves. The result is an enticing combination of contrasts -- sweet, salty and spicy.

Pho is the Vietnamese noodle soup that is a particular favorite for breakfast, while bahn mi, a stuffed local bread resembling a baguette sandwich, is a treat any time of the day. Upscale dining is often a fusion of French and Vietnamese cuisine, a favorite of foodies around the planet.

To dine like a native, take rice from the large shared dish and put it in your rice bowl. Use chop sticks to pick meat and seafood from serving dishes and add to the rice. Remember, it is very bad form to stick chop sticks into the rice bowl vertically -- it is the Buddhist sign of death.

Bau Troi Do is a favorite for fresh seafood in a seaside setting. The chef in the family run restaurant has experience in five-star hotels, and it shows in catch-of-the-day dishes washed down with inexpensive local beer. Be sure to try the squid hot pot and the jumbo fried shrimp. (Lo 2 Duong Hoang Sa, Da Nang; (8490) 5727576; open daily 11 a.m. to 11 p.m.)

Les Jardins de la Carambole serves delectable French and Vietnamese specialties in an indoor dining room or pretty garden terrace. Its French Colonial villa, located inside the Citadel, just steps away from the Forbidden City, is as impressive as the food. (Dang Tran Con 32; (8454) 3548815; open for breakfast, brunch and dinner)

The best restaurant in town is Brother's Café, where you enjoy scenic seating outside in the gardens or upscale comfort inside. Try the local specialty, the meat-stuffed dumpling called "white roses." (27 Pham Boi Chau Street; (84510) 3914150; open daily 10 a.m. to 11 p.m.)

Hoi An's hip spot is the Mango Room. Grab a street-front seat and have a Vietnamese beer. The food is good, too. The owner spent time in the U.S., and the menu has both Vietnamese and California-influenced offerings. (111 Nguyen Thai Hoc; (84510) 3910839; open daily 8 a.m. to midnight)

Hoi An offers visitors a wealth of culture, great food, friendly people and some of the best shopping in Vietnam. Basically untouched during the Vietnam War, it is a 45-minute drive from Da Nang and two hours from Chan May. Hoi An's narrow streets (many pedestrian only) are lined with well-preserved architecture that gives the centuries-old town a wonderfully quaint atmosphere. To visit the museums and old houses, get a ticket for a nominal fee at the Hoi An Tourist Guiding Office (1 Nguyen Truong).

Most visitors simply wander and shop, stopping for a refreshing iced coffee before boarding buses back to the ship. The Central Market, near the Thu Bon river at Nguyen and Tran Phu streets, has stalls selling food, crafts, spices, fish and so forth, and lots of hustle and bustle (haggle there if you want to buy anything). As for the shops, Shop Ngoc Uyen (92 Le Loi Street) is an excellent souvenir venue for high-quality silk scarves, purses and other accessories (at prices so reasonable you'll want to stock up).

In the city of Da Nang, The Cham Museum has the largest collection in the world of Cham sculpture, with more than 300 sandstone pieces dating from the fourth to 14th centuries. A guide is almost a necessity to fully appreciate these timeless treasures (and to understand the labels, all in Vietnamese). (Tran Phu Street; open daily 7 a.m. to 6 p.m.; admission around $2 for adults)

Hue's Forbidden Purple City, once the enclave of the Imperial Family and entourage, was all but ruined during the Vietnam War. So were the surrounding The Imperial City, modeled after the Forbidden City in Beijing, and the Citadel, the 23-foot-tall brick wall that enclosed both enclaves. Restoration is ongoing for the dozens of buildings and courtyards. The Palace of Supreme Harmony is back to its original grandeur, including lavish furnishings. A few others like the two Mandarin Palaces and the Dien Canh Can are well along and expect to be completely restored by 2015. (Open 8 a.m. to 5 p.m. daily, except for official events and celebrations; $3 fee)

About seven miles from Da Nang, the five Marble Mountains are each named for elements -- water, metal, wood, fire and earth. Tho Son (earth) is the highest peak, and for a small fee, visitors can climb 153 rather steep steps to the top for tremendous views of Da Nang, China Beach and the South China Sea beyond. There also are caves where the Viet Cong hid during the war. Most of the temples and shrines are new, replacements for those destroyed during the fighting. Donations are requested at some of the shrines.

Below the mountains, the town of Non Nuoc produces marble goods, and there are numerous production studios and stalls selling everything from tiny folk figures and chess sets to giant statuary. Ship shore excursions often stop at these studios for shopping and bathroom breaks on the way back to the cruise port.

Experience the exotic, refreshing flavors of Vietnamese cuisine on a food tour. One of the best is The Original Taste of Hoi An Food Tour led by "The Teacher," Australian ex-pat Neville Dean and his wife. As he introduces sample after sample of delicious dishes, Dean entertains with stories about the people, culture and of course the food of Vietnam -- all of which he knows in depth and loves passionately. The tour is limited to 14 and fills up quickly.

Step back in time with a visit to the Royal Tombs, located about four miles from Hue and once the palace of Tu Duc, Vietnam's longest reigning emperor. His tomb took three years to build, though today no one knows exactly where he is buried. The eight tombs onsite are far from simple memorials, reflecting Tu Duc's extravagant lifestyle said to have included more than 100 wives.