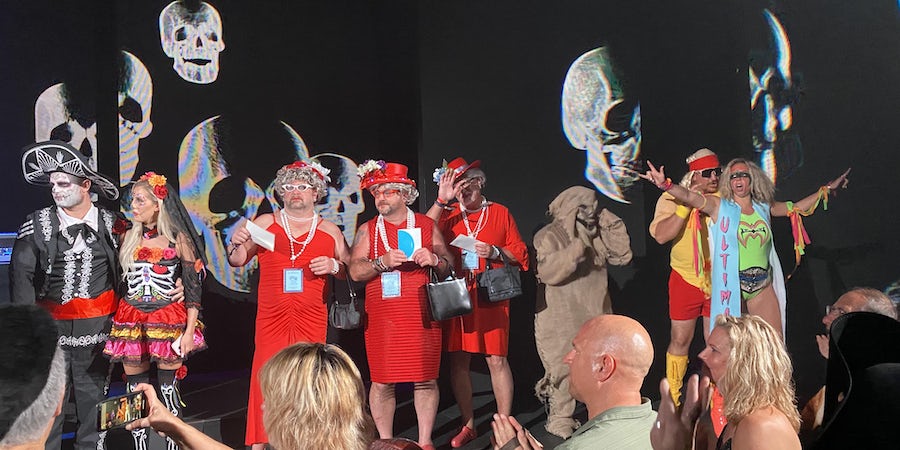 Virgin Voyages prides itself on being an adults-only cruise for the young at heart. Every itinerary features amenities and activities that can bring out anyone's inner child, but what better way to connect with that youthful energy than on a Halloween sailing?

Virgin's usual perks still apply -- complimentary WiFi; included specialty restaurants and free fitness classes, to name a few -- but they take on a new meaning with a Halloween sailing. Of course the cruise line also ups the ante with a few bonus benefits, too.

Here are just a few reasons why adults will love a Halloween cruise with Virgin Voyages.

Virgin Goes All Out With the Halloween Theme

You could say Virgin Voyages always offers an experience that’s as high energy or as relaxing as you'd like it to be, but during a holiday-themed sailing, including Halloween, there’s an extra buzz in the air. That’s because Virgin sets the stage early with Halloween decor sprinkled throughout the cruise line’s Terminal V, as well as the ships themselves. Sailors will find cobwebs and spiders on the walls, skeletons in the hallways, monster claw marks on the elevator doors, and photo backdrops with appropriately creepy lighting and colorful pumpkins. At The Manor, Virgin Voyages’ nightclub, disco balls are replaced with hanging ghosts and ghoulish lighting, while the DJ adds a few Halloween favorites to the set list.

No detail is too big or small for Virgin Voyages to infuse the Halloween spirit into the sailor experience. On October 31, cruisers will not only find classic Halloween candy on board, but other desserts also get a special makeover with ghostly marshmallows, pumpkin-shaped cakes, and tombstone chocolates. Virgin also makes it a point to launch new programming to kick off the holiday season with Halloween. This year, that was Seven Seas Sippers, a self-guided bar crawl across the ship. Sailors who completed the challenge, indulging in a drink at the seven designated bars, were entered in a raffle to win a free cruise with Virgin Voyages.

Popular sailor experiences will always be available, but many of them will have a Halloween twist. For example, the Grog Walk guided bar crawl was zombie-themed on this year’s sailing, while sailors also tested their holiday knowledge with a game of Halloween-inspired trivia. Virgin’s signature Scarlet Night became Scarlet (Fright) Night, with sailors encouraged to wear their best red outfits while enjoying the mini performances taking place all across the dimly lit ship. If a cast member tells a sailor to join them for a secret surprise, it’s best to follow along. Part of the fun of Scarlet Night is discovering these random and hidden pockets of fun.

But Virgin goes beyond simply revamping its well-known “happenings.” The company also brings special performances and new experiences for its Halloween sailors. For example, magician and mentalist Marc Spelmann, a semi-finalist on Britain’s Got Talent, mesmerized crowds on Valiant Lady this year with his seemingly impossible tricks.

A Halloween sailing is obviously incomplete without a monster bash, and Virgin Voyages certainly delivers on that. The decor, high energy, and themed activities all culminate in a massive, shipwide Halloween party with most sailors dressing up in their best costumes. If the holiday spirit weren’t enough to motivate guests to get all dressed up for Halloween, the costume contest prize certainly inspired participation. Crew members selected the top five costumes among all the contest entrants, then left the final decision to the crowds at the Halloween party. The sailor with the best costume was awarded a free Virgin Voyages cruise.

Virgin Voyages has always touted its no children rule as one of its biggest draws for both childless adults, as well as those who might need some alone time away from their kiddos. This adults-only requirement is even more vital when it comes to a party like Halloween. Want to wear a nightmarish costume? No need to worry about scaring little kids. Feeling sexy and want to wear something a bit risque? There will be no underaged eyes roaming your way. Without any children around, adults are free to party hard until the early morning hours—something that many sailors haven’t been able to do in years.

Virgin’s Halloween Provides A Welcoming Atmosphere For All Sailors

If there’s one thing that Virgin Voyages does well, that’s create a judgment-free atmosphere that encourages sailors to let loose and be themselves. It doesn’t matter what you look like, who you love, or where you come from, everyone is right at home. Virgin’s target audience is clear and that attracts open-minded people of all walks of life who simply want to have some fun. On any and every sailing, you’ll see sailors young and old bonding by the pool, sharing a drink, or getting down on the dance floor.

This welcoming environment is even more apparent on Halloween as everyone gets in touch with their inner child, dresses up a bit silly, and dances the night away. For many sailors, it might be difficult to enjoy a nightclub back at home, but on Virgin Voyages they can party as much or as little as they want in this safe space. The DJs even make sure to play music that caters to all ages and demographics.