You may also like
Dismiss
Celebrity Cruises Captain's Club Cruise Loyalty Program
Vibe Beach Club on Norwegian Cruise Line
Top 8 Long Haul Short Break Cruises
Holland America Cruise Line History
What Is a Cabana on a Cruise Ship or Private Island?
The World's Best Beaches to Visit on a Cruise
23 Things Cruisers Love to Complain About
10 Things You Should Never Do on a Cruise Line Private Island
Live from Rotterdam: Holland America Line's Newest Cruise Ship Is A Worthy Successor
Top 9 Reasons Why You Should Pick a Cruise You Can Drive To Instead of Fly 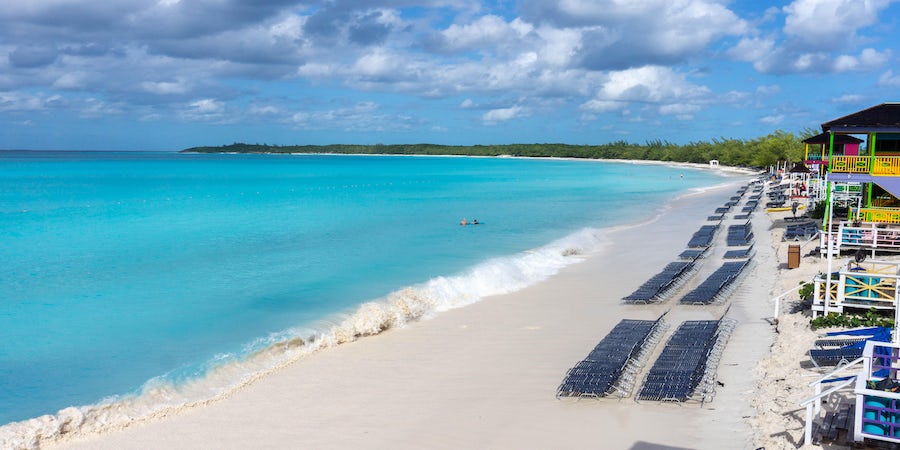 Holland America Line's Half Moon Cay, a sun-splashed paradise the line has been carefully upgrading and adding to since its purchase in 1996, is one of the older cruise line private islands but still one of the most popular.

We had a chance to set foot on Half Moon Cay again aboard the inaugural cruise of Holland America's new Rotterdam. It was Cruise Critic's first visit to Half Moon Cay since the global health pandemic began shutting down travel in March 2020. The return to this steady mainstay of tropical beauty was oddly cathartic: for as much as the world around it has changed, the experience on Half Moon Cay remains wonderfully untouched.

While Half Moon Cay is owned by Holland America Line, Carnival Cruise Line ships also call on the island -- though almost never at the same time. There is no dock here; ships anchor just off the crescent-shaped beach and passengers head ashore on custom-built tenders that are larger than those found on the ship, to handle higher swells. These tenders come complete with sheltered and exposed seating areas -- perfect for folks who like to grab that Instagram-worthy shot of their ship at anchor.

Our itinerary included not one but two days at Half Moon Cay -- a new trend among cruise lines that is quickly gaining in popularity. That's due primarily to the fact that COVID-19 is still a concern and a number of Caribbean ports remain shuttered to cruise traffic.

But the pandemic is the furthest thing from mind for most cruisers spending the day on Half Moon Cay. Masks will still need to be worn on the tenders coming over and in crowded settings where physical distancing can't be maintained.

Other than that, guests are free to take in the fresh tropical breeze, grab a cold drink, and watch their cares evaporate.

Booking a Villa on Half Moon Cay

The most lavishly indulgent way to spend your time on Half Moon Cay is surely renting one of the island's Villas -- brightly-colored, two-story wooden structures that are part house, part cabana. (Check out Cruise Critic's full rundown of Half Moon Cay cabanas).

Each villa comes with two levels of balcony space, a separate dining room with a small kitchen, a five-person indoor hot tub, a bathroom, and four padded loungers. An open-air concept lets in the fresh Caribbean breeze while a built-in air conditioner cools the dining area to a refreshing temperature.

A villa rental costs $599 and can hold up to eight people. But you'll want to spring for the Butler Add-on that includes alcoholic and non-alcoholic beverages, lunch, snacks and other perks, and costs $399.

Our butler, Stevan -- normally a waiter in the Pinnacle Grill -- did a magnificent job of bringing our group beverages throughout the day, not to mention snacks and a full lunch consisting of steak or seafood. You can order anything off the Half Moon Cay beverage menu, which includes staples like Pina Coladas and crisp Red Stripe beers, to wine and other slushy alcoholic concoctions.

Not having to traipse across the beach for food or drinks is part of the indulgence of this add-on package.

To be sure, you pay a premium for all this tropical splendor. But our group of eight split the cost eight ways, taking what would have been an expensive day and making it a more manageable cost (only one person has to actually book the villa and the butler package).

It is one of the best things I've done on Half Moon Cay, and without a doubt the thing I've enjoyed the most. I'm not a beach person; I burn in the sun and am uncomfortable in the heat. Relaxing on the veranda of the villa, cold beer in hand, book at the ready while the surf rolled ashore just feet away -- that, to me, was paradise.

For those looking for something a little more intimate, smaller, single-level cabanas provide some respite and privacy, but without the fancy hot tub, bathroom and lavish setting. They can accommodate four and cost $450.

Beaches at Half Moon Cay

Of course, if you are a sun-seeker and wannabe beach-bum, Half Moon Cay offers miles of crystal-clear water and buttery sand in which to indulge.

Beach chairs are available free of charge, and with ship capacities remaining below normal as the industry restarts, crowding is seldom a problem. Those looking for a bit of shade (which is in short supply throughout most of the beach) can rent one of the island's iconic blue clamshells, complete with two shaded chairs.

We did this on our first day on Half Moon Cay and found the clamshell to be ideal for storing our stuff, but little else. The blue canvas shell itself blocked the breeze, which raised the temperature inside by several noticeable notches. True, it serves as a nice respite from the sun -- but so do the island's open air, covered bars -- one of which is inset in a replica of a wooden pirate ship.

Adventures and Diversions on Half Moon Cay

For those who have already been to Half Moon Cay before, all the island's favorite shore excursions are still present, from easy bike and hiking trips to more adventurous diversions like AquaTrax sailing and horseback riding.

The latter presents some of the island's best views as visitors enjoy a horseback stroll through the surf -- if the surf cooperates (it didn't on our sailing, where strong swells came so far up the beach that they swamped the first row of sun loungers).

Of course, half of any good adventure is food and beverage, and Holland America's offerings are as good on land as they are onboard. Passengers can pre-order lunch (for an extra cost) from the Lobster Shack from their onboard dining staff, and have their meals ready for pickup once on-shore. Complimentary food is available from the on-shore buffet, which ran -- on our sailing -- from 11 a.m. until approximately 1 p.m.

Bars are available throughout the island, from just off the main tender entrance and welcome center to beach-front watering holes, with plenty of alcoholic and non-alcoholic options available.

Holland America's Half Moon Cay has been consistently ranked as one of the top private islands in the Bahamas since its debut. As Cruise Critic discovered, that is still the case, even in these COVID times. In fact, after a day of blissful rest and relaxation on Half Moon Cay, we had to be reminded to re-don our mask before boarding the tenders back to the ship.

Half Moon Cay may not have the waterslides that other private islands such as Perfect Day at CocoCay have, nor the dedicated docking facilities found on some. What it does have is that iconic crescent-shaped beach that has been the primary lure for travellers here for the past 25 years. Everything else is just icing on the cake.