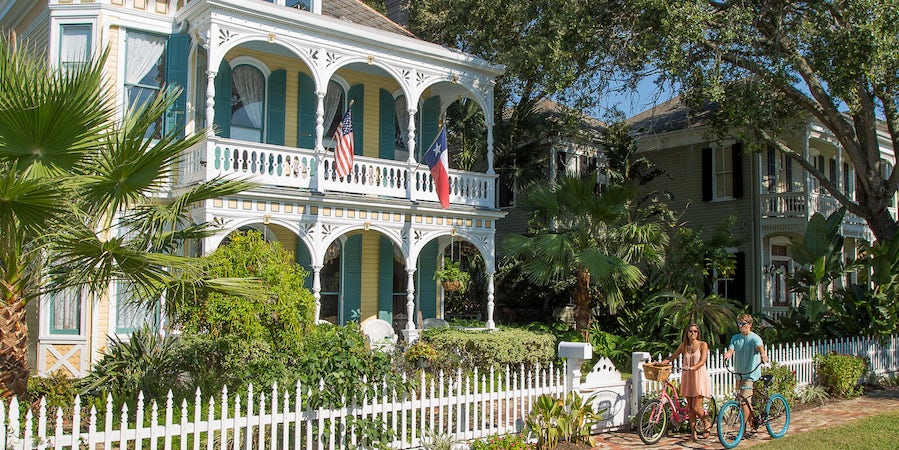 With a long and storied history, bountiful beaches and so much to eat and drink (plus a wide range of accommodations), Galveston has a lot to offer for your pre- or post-cruise pleasure. The fourth-busiest U.S. cruise port is a great drive-to spot, but it’s also near two major airports, making it convenient for those flying in from parts elsewhere. Here, the ultimate experts -- that is, your fellow cruisers, who have been there -- recommend their favorites, so you can try them, too.

Getting There -- Fly and Drive

Set on a 64-square-mile barrier island less than an hour southeast of downtown Houston, Galveston is well-connected by road (the fast-moving Interstate 45) to Texas, and the states beyond, and many cruisers choose to drive in. If you fly, you’ll have two options for airports. The larger, George Bush Intercontinental Airport is about 70 miles away and has direct flights from major hub cities, while William P. Hobby Airport is smaller and closer, about 40 miles straight down the interstate.

In addition to transfers booked through the individual cruise lines, Texas resident and Cruise Critic member leen50 recommends a local car service. "We used Galveston Limo from IAH…terrific!" Prices for a shared shuttle are very reasonable -- $25 per person, one-way, from Hobby, and $35 for the same from George Bush. The same company also offers private livery services, from a three-passenger sedan to a stretch limo and a 56-seat coach, for groups. Other users recommended Galveston Express, and, noting that the "vehicle was clean and on time," and that the driver was "awesome… incredibly personable and helpful." Nadersmom recommended a company called VIP Express. And amypintx from Oklahoma City notes that she and her husband used ride-sharing service Lyft from Hobby for just $39 (one-way).

While both George Bush and Hobby offer the typical array of airport accommodations, Cruise Critic members recommend staying on Galveston Island, where you don't need to worry about traffic, and the cruise port is just a few minutes away. (You will have 5,000 hotel rooms and some 3,000 vacation rentals to choose from, and, once you get to the port, they say you'll be pleasantly surprised by the close proximity and accessibility of the two cruise terminals to the ships.)

Traveling from Idaho, marci4tony planned on arriving a day early, to enjoy the pleasures of the coast. "We are staying at Gaidos (on the seawall) -- we will get there in the dark but hoping for a beautiful sunrise on departure day, right on the Gulf." Houston-based geofeo approves of that choice. "Gaidos is nice. Right across from the beach. Eat at the restaurant, very good." The hotel, full-name Gaidos Seaside Inn, offers a cruise ship special when booked directly with them, which includes free parking for the duration of your cruise as well as complimentary transportation to the port. Texas Tillie agrees, about the restaurant, noting its long legacy, calling it a "local institution." He writes that Gaidos "has been serving seafood in Galveston since the earth cooled!"

New Jersey-based fdthird likes Harbor House Hotel and Marina, and notes that it's close to everything that matters, including the historic heart of Galveston. "Good hotel, right next to port, great restaurants in walking distance, and a block from the Strand!" The hotel is located on the water, with views of the harbor, and at Pier 21, which is home to museums, shops, places to eat and the three-masted tall ship Elissa. Guests can park in their garage during their cruise for $12 per night.

Related: Things to Do in Galveston Before a Cruise

Reina del Mar, from the United Kingdom, likes both the Hilton Galveston Island Resort and the Holiday Inn, noting that both properties have provided free transportation to the port. Galveston Cruiser recommends the upscale Tremont House. This historic hotel, housed in a lovingly restored former dry goods warehouse (the original building dates to 1879) features a rooftop bar where you can watch the sunset and see the port; you should be able to spot your ship on the day of departure from here. It offers Park & Sail packages that include valet parking for the full length of your voyage, as well as shuttle service to and from the port. The century-old, Grand Galvez, sometimes known as the "Queen of the Gulf," offers a similar package, and Petroplex adds that it has "a beautiful spa which is a nice way to pass part of your day."

But if hotels aren't your thing, no worries: Galveston also offers all sorts of accommodations, from beach houses to downtown lofts to grand Victorian homes. You can even take a step -- and a sleep -- back in time by renting a rambling manor in the East End Historical District, where you can enjoy an iced tea (or a mint julep) in a rocking chair on a front porch, before retiring to a place with all the comforts of home (including a full kitchen).

Dining Out: Fresh Eats fished From the Gulf (and More)

Surrounded by saltwater, restaurants on Galveston Island serve up some of the best and freshest seafood you’ll find anywhere. Set at the nexus of the South, the West and Texas, with Caribbean and Latin America not so far away, this is a place with diverse culinary influences.

But, defying what your mother always told you, try some candy before dinner. "Go to La King’s Confectionary. You can actually walk there from the cruise pier," writes Petroplex. "I get a kick out of watching them make their own candy. I like eating the candy even more." The 1920s throwback has a long counter selling more than 50 candies, including absolute classics like fresh, saltwater taffy and peanut brittle. Even better – there's a soda fountain, plus ice cream.

But you won't really want to ruin your dinner, with so many places to dine out. Member ssb recommends a number of local establishments, including the romantic Rudy & Paco, which serves up Gulf shrimp, snapper and grouper (and more) with a Latin twist (and has been named to OpenTable’s Top 100 restaurants), as well as the fine dining at Shearn’s Seafood and Prime Steaks, which specializes in garlic-infused Shrimp de Jonghe and a rich lobster bisque, with ninth-floor sunset views out over Galveston Bay. (Word to the wise: There’s a smart-casual dress code.)

For simpler fare, Fort Worth-based Cruisin Dave recommends Mosquito Cafe. "Not fancy," he writes, "but great food." He's right -- and residents have rewarded the restaurant for its culinary efforts, voting it, among other things, tops for best breakfast, best business lunch and best overall restaurant in Galveston County. (The menu here ranges from comfort food to tacos and pasta, with numerous seafood options.) And o-state girl loves Shrimp 'N Stuff, calling it "a very unpretentious restaurant that serves yummy seafood." Those same voters awarded this place best seafood in the county last year, which isn't surprising when you consider the fact that they peel, devein and bread every shrimp by hand, in-house, and make their own gumbo and sauces from scratch. (Also nice: You can dine outside, enjoying the fresh air on a shady deck.)

The Perfect Places to Visit and Tour, Pre- and Post-Cruise

A popular vacation destination in its own right, Galveston’s coastal pleasures mix with a long and rich history, with a wide array of attractions. Your challenge: finding enough time. Member ryndam, from nearby Houston, says that "Moody Gardens can occupy an entire day." Or even more, really -- with three iconic pyramids, Moody includes a 1.5-million-gallon aquarium, zip lines, a high-ropes course, scientific and cultural exhibits and a small waterpark. Oh, and a fully immersive rainforest experience, too.

Local Host Kat, from just across the Causeway in La Marque, Texas, lists a half-dozen recommendations. "If you ever wondered how an offshore oil rig works, check out the Ocean Star." Accessed by a foot bridge off Pier 19, right across from the cruise port, this unique museum is a retired, refurbished jack-up drilling rig, and you can tour through three levels, learning about geological exploration and oil and gas production, experiencing the actual tools of the trade. Host Kat also recommends harbor and dolphin tours, the local railroad museum, and Pirates! Legends of the Gulf Coast. The latter is a family-friendly, interactive experience that takes you across the deck of a pirate ship and into the captain's cabin, with actors bringing the lives of Jean and Pierre Lafitte to life. Yes -- y’arrr gonna love it.

With multiple visits Galveston, Petroplex professes that he loves this town and enjoys visiting the Galveston Naval Museum, noting it "has a cool WW2 submarine you can walk around, if you’re physically able" as well as a surface destroyer from the same era. The former is the USS Cavalla (SS-244), towed to this museum at Seawolf Park in 1971, and the latter is the USS Stewart (DE-238), which has been moored in this spot since 1974. You’ll also find a vintage sail and a conning tower from other vessels.

And ssb calls the Bryan Museum "a must," noting that it's housed in "an exquisite Renaissance Revival-style building surrounded by beautiful landscaping in a historic neighborhood." The private collection of J.P. Bryan, a visit here takes you back to "the West as it will never be seen again," as announced by a plaque you’ll see at the door, and ssb highlights its three-dozen saddles, hundreds of spurs, folk art, cowboy chaps, maps and other artefacts from this rough-and-ready era of American history.

All this, and we haven't even mentioned the beaches yet -- from live music and party fun at East End to the pleasures of Galveston Island State Park, you’ll a full 32 miles of beaches here (and five beach parks).

Related: Your Must-Do List for Your Pre- or Post-Cruise Stay in Galveston