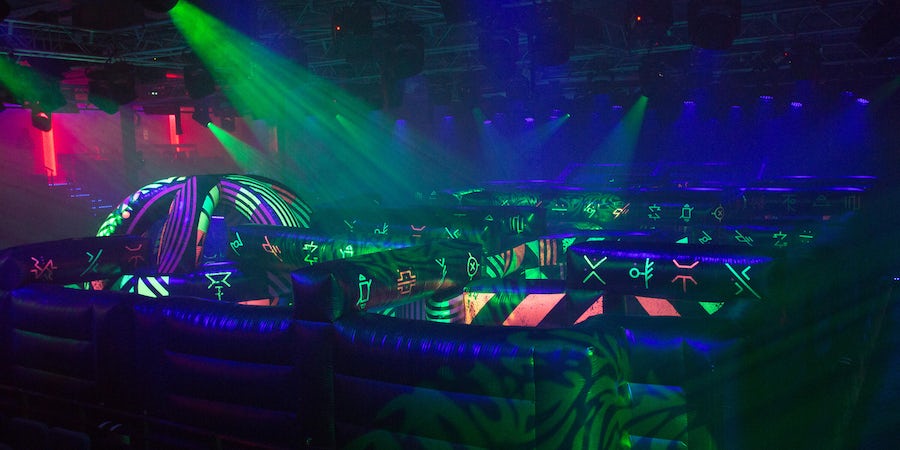 The Battle for Planet Z Laser Tag Arena on Symphony of the Seas (Photo: SBW-Photo/Royal Caribbean)

Cruise Ship Laser Tag: Where to Find It, How to Play It

Laser tag, once viewed as a vestige of the early '80s obsession with outer space and neon (and all things that go "pew pew"), is making a comeback. This 1979-invention has now made its way to sea, launching with Norwegian Joy in 2017. By the end of 2018, the number of cruise ships with some version of laser tag will have grown to five. Here's everything you need to know about playing laser tag on Norwegian and Royal Caribbean cruise ships.

Royal Caribbean offers its version of laser tag, called "The Battle for Planet Z" on Symphony of the Seas, Independence of the Seas and, starting in June 2018, Mariner of the Seas. Battle for Planet Z is a complimentary glow-in-the-dark version of the game that pits teams of aliens against teams of robots for control of an extraterrestrial planet that just so happens to be located in the Studio B ice rink.

The "arena" is actually an inflatable maze that sits on top of a platform over the ice rink (no slipping and sliding here). Participants are given a vest and phaser gun. All loose items and bags must be left behind.

Related: Best Water Sports Gear You Can Bring on Your Sun and Fun Cruise

Participants line up outside during opening hours and admission is first come, first served. Once inside everyone is randomly divided into two groups: alien or robot (green or pink). Neither is a "bad guy" and you can't choose which team you're on; it's not uncommon for families and friend groups to be split up.

Players earn points every time they hit the vest of someone on the opposite team with their phaser. The points for all players on each team are added up to determine the winning team. You're not out of the game if you get hit, but your vest will take a few moments to "recharge" before you can re-enter the game. A leaderboard is shown after exiting with categories like "Most Accurate" or "Trigger Happy," but players will need to remember the name printed on their phaser to determine where they rank.

On Norwegian Cruise Line, laser tag doesn't have a fun name -- it's just called laser tag -- but the setup is impressive. It does cost extra -- $9.95 for one 10-minute session, or buy an unlimited laser tag pass for $199 for an entire one-week sailing. The game can be found on Norwegian Bliss and Norwegian Joy.

Designed as an abandoned space station, the permanent laser tag arena on both ships is made to look like it's constructed of concrete. Players can dart in and out of various rooms, hiding behind columns and peeking out of windows to take a quick shot. There's also a cool landing craft, an alien "preserved" in a giant tube and what appear to be cryogenic modules.

At night, the arena takes on an entirely different feel, when bright lights kick in.

Players in Norwegian's laser tag arenas don't wear vests, so you're aiming at the opponents' guns when firing. The guns have fun features like settings that allows you to shield yourself for four seconds (with a five second or so break afterward so you can't stay in shield mode) or build up power so that one shot will take out another player -- usually it takes several shots to fully eliminate a player. As on Royal Caribbean, all players have unlimited lives, you just have to go back to "home base" to recharge if you've been eliminated. Team members accrue points, which are tallied at the end to determine the winning team (red or blue).

Closed-toe shoes are required on both cruise lines.

Related: What Cruise COVID-19 Changes Are Likely Here to Stay -- And What's Not

On Royal Caribbean, an adult must accompany children under 16 (the adult is not required to pay). On Norwegian, children do not need an adult chaperone, and there is no age or height restriction; kids must simply be able to hold their own laser gun.