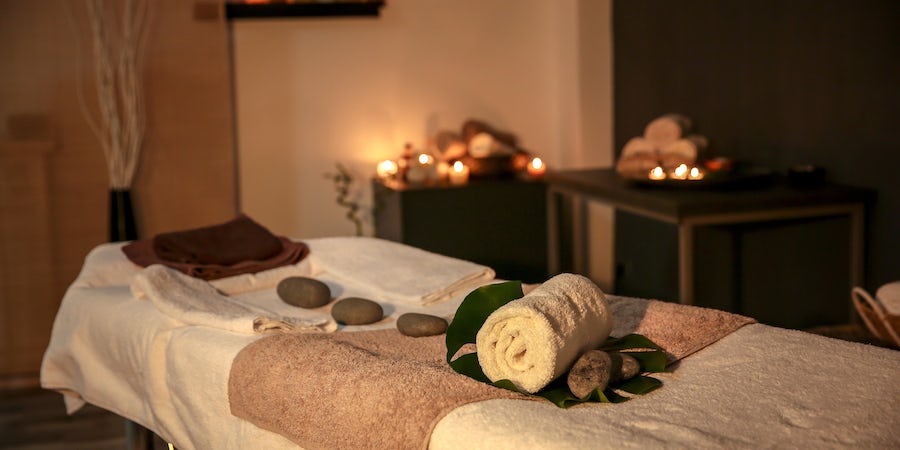 Cruise ship spas have changed dramatically since the days when massages were offered in converted laundry rooms. Today every major cruise line outfits its ships with wondrous spa facilities that include salon and barber services, spa treatments (for women, men and, sometimes, even teens), thalassotherapy pools and thermal relaxation areas. Spas are so popular that prime-time appointments for treatments often fill up on embarkation day. Spa enthusiasts in the know frequently hit the reservation desk even before visiting the buffet or unpacking.

But for the uninitiated, spa menus might as well be in a foreign language. You've spent a nonstop day in port, and you just want to relax or ease some aches and pains. What to pick? Are the treatments the same as in land-based spas? What the heck do some of those fancy names mean (Ionithermie, anyone)? Are the prices more or less expensive? Are the treatments even safe?

Never fear -- we can translate. From what to expect from the various treatments to understanding treatment pricing, here's our primer on cruise ship spas.

In general cruise ship spas offer most of the same services that land-based spas offer: massages, facials, wraps and body scrubs. Of all the treatments, massages are by far the most popular, a spokesperson for Norwegian Cruise Line, says. On Norwegian Epic, for example, massages constitute 41 percent of spa services rendered.

Most ship spas offer a range of massage styles, from basic Swedish and aromatherapy to hot stone massages. An aromatherapy massage is generally a Swedish massage in which scented oils are used to help set your mood -- lavender scents to calm the nerves, mint to refresh the body, etc. In a hot stone treatment, heated stones are placed on your back before the massage begins (and sometimes during the treatment) to help loosen your muscles. Deep-tissue massages are for those who like a lot of pressure (and perhaps just a little pain).

Facials are second in popularity, the Norwegian spokesperson says, representing about 12 percent of spa services. In general, all facials cleanse and moisturize the skin. If you've never had a facial before, you might want to start with a gentle facial, as the more comprehensive facials often include uncomfortable blackhead removal.

Wraps and scrubs round out the typical spa treatments. Scrubs exfoliate the skin, leaving your arms, legs and other areas feeling soft and smooth. Wraps are generally used for detoxifying and involve being slathered in mud or algae and being wrapped tightly in foil for 20 to 30 minutes. If you're even slightly claustrophobic, skip the wrap.

Eastern treatments include reflexology, reiki and acupuncture. In reflexology, a therapist applies pressure to the feet, hands and ears to activate chi (a healing life energy) in parts of the body that correspond with the pressure points manipulated. Reflexology is often combined with massage for a more complete treatment.

Reiki is a much more ephemeral treatment, in which a healer places his or her palms on specific parts of a patient's body to give and move energy around. Reiki is said to promote relaxation and internal healing.

Acupuncture also is an energy-based treatment, but the energy is manipulated through the use of small needles placed on specific chi points on the body. Acupuncture can be used to treat chronic pain (headaches or muscle pain), insomnia and seasickness. It also promotes overall well-being.

Spas claim that Ionithermie cellulite reduction treatments help people detoxify and lose inches, typically off their stomachs, butt and thighs. A treatment consists of the chosen area being slathered in special algae, wrapped in plastic and then given a small amount of electrical stimulation. Ultimately, you sweat a lot and may lose inches that way. Practitioners claim you must do at least three treatments to truly see results.

Dermal fillers are noninvasive treatments designed to temporarily restore youthful fullness to your facial skin, plump up lips and soften creases and wrinkles. Dermal fillers, such as Restylane, Perlane and Dysport, are administered via injections.

Similar to dermal fillers, Botox specifically targets creases on the forehead and lines around the eyes. Botox also is injected. Botox and dermal filler injections are given by medical professionals (most are licensed in Asia), even on cruise ships.

Like the types of services offered across cruise brands, pricing is consistent with high-end urban (read: expensive) land spas. For passengers coming from more rural areas, or even suburban areas with Massage Envy franchises, prices could come as something of a shock. Fifty-minute Swedish massages typically cost between $120 and $180. You want hot stones, aromatherapy or deep-tissue? Be prepared to pay more.

The reason for the higher end of the pricing range is two-fold.

First of all, unless you're planning on visiting a spa at a port of call, the ship's spa has no competition. They can charge whatever the market will bear, and judging from how fast time slots fill up, the cruise market can bear a lot.

Second, with very few exceptions, the cruise lines aren't even competing with each other. Virtually every spa on a major cruise line is operated by one company -- Steiner Leisure. While prices do vary a little between cruise categories -- contemporary and premium vs. luxury -- there's practically no difference between lines within the same category. A 50-minute La Therapies Hydra Lift facial costs pretty much the same on Norwegian Cruise Line, Princess Cruises, Holland America, Royal Caribbean and Carnival Cruise Line. That same facial costs more on Crystal Cruises. Steiner Leisure operates the spas on all of these cruise lines. Prices in Canyon Ranch spas, which are found on Regent Seven Seas Cruises, Oceania Cruises and Celebrity Cruises, vary more and tend to be higher than in the Steiner spas.

Not all spa services are more expensive on a cruise. Cosmetic treatments are often priced the same as on land or are more affordable. Botox injections, for example, can cost upwards of $500 in a city spa. On a ship, prices typically start at around $300. Teeth whitening treatments can cost anywhere from $500 to $1,000 at your local dentist, depending on the type of treatment and if more than one session is needed. On Norwegian Cruise Line and Crystal Cruises, teeth whitening costs about $150 for one session, which the spa claims can last up to seven years without any in-home maintenance.

Why the discount? Cruise ship operators can hire practitioners from all around the world, all of whom are held to the certification standards of their home countries. Many of these practitioners are used to being paid less than, say, a U.S. or European doctor, would. Management of ship-based medical/cosmetic service centers is also less expensive than it is on land. Therefore, the spa company has lower expenses than a clinic in your hometown, and it can pass those savings on to customers via lower prices.

This doesn't mean lower quality. Cruise lines know their reputations are stake and act responsibly when it comes to these treatments. Other benefits of getting these treatments onboard, rather than at home, include more attention from your doctor before and after your procedure and a beautiful cruise ship environment in which to have the treatment and recover afterward.

The most common complaints cruise ship passengers have about visiting onboard spas are about the product pitches that always follow the treatments. Nothing ruins a perfectly relaxing treatment like having the therapist hit you with a hard sell while you're still in massage afterglow. However, the tactic can be averted by simply telling your spa technician, in no uncertain terms, that you will not be buying anything. If you want a softer approach, tell her that you've already purchased the suggested products on a previous cruise and don't need any more.

Editor's note: This piece focuses on spa treatments only, and not salon services (like hair-styling and mani-pedis).