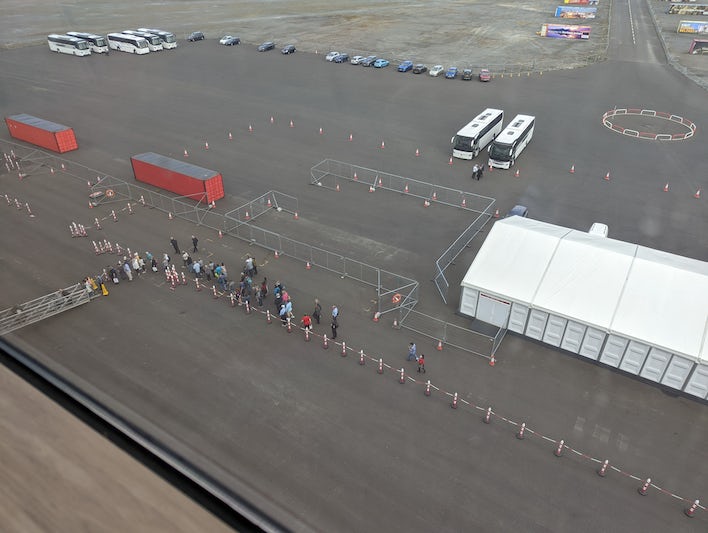 PDXTraveler
2-5 Cruises • Age 60s
This is my first review... so pardon me if I get too wordy. My wife & I flew from Portland into Vancouver International Airport on the day the cruise was departing; our flight on Air Canada Jazz was on-time and we cleared customs & immigration in a breeze. (Note: we tried booking train on Amtrak but it was already booked for the day prior to the cruise 6-weeks prior to departure.) as we left ...
Read More

kjquilts
10+ Cruises • Age 2020s
We live in Oregon and really need more cruises departing from the west coast. Flew to Vancouver BC via Horizon - Portland to Seattle, then Seattle to Vancouver day of cruise. Very cramped aircraft but it got us there safely. Hung out at the airport then caught limo to the Ballantyne pier. We were among the first to arrive at Ballantyne so fact that there was no separate suite line ...
Read More

First and probably last on NCL

Review for Norwegian Star to Alaska

azflash
10+ Cruises • Age 70s
Well what I have read about NCL is true. Probably the worst overall experience I have ever had. It started bad with over 3 hours to get through embarkation. It was a total disaster; and never a word of explanation from anyone from NCL. Almost 1/3 of the passengers were not on the ship for muster and never went through the drill. Now for the good, bad and ridiculous.Ridiculous:No concern for the ...
Read More

rideev
2-5 Cruises • Age 60s
Pre-cruise.. Flew to Seattle and spent 3 nights in Seattle. Great town great time, but this is a cruise review. Used SeaTac car service to get to hotel downtown. Cost was about $40 + tip. This was real late at night and we have found the car services to be about the same cost as a cab, but much nicer, cleaner, and we feel safer. Doesn't mean we are any safer, but we feel it so who cares. Did ...
Read More

sigmas
6-10 Cruises • Age 70s
We have taken several NCL cruises in the last few years, and all were excellent.This cruise, although satisfactory, was poorer in comparison to the others. As usual, our cabin was clean snd well appointed. Our cabin stewards did an excellent job. I was impressed that they learned our names immediately - no mean feat considering the number of people they serve. I would suggest that you take your ...
Read More

Free Style on the Star: Strengths and Weaknesses

grammy sue
10+ Cruises • Age 70s
My husband and I cruised on the Star from October 2nd-October 8th; a repositioning cruise starting in Vancouver and ending in Los Angeles. We chose this cruise because of the itinerary and because of the price. Norwegian markets their "Free Style" concept, but on this ship that translated to waiting in lines and poor service. In all fairness, the food and the service was very good at breakfast ...
Read More

neolithik
2-5 Cruises • Age 80s
We were a little cautious about NCL after reading some reviews. It turned out to be pretty much what we had read about. The beds were bad. The mattresses were worn out. Our Stewards did manage to swap mattresses with the overhead bunks and those mattresses were less worn. The stewards were very good. The food was very salty to our tastes, especially the hot soups and sauces. We tried to ...
Read More

piperut
First Time Cruiser • Age 60s
Norwegian Star Sailing Date 2 October 2010 Itinerary: Pacific Coastal Number in party 6 (one from Seattle, and 5 from the Salt Lake City, Utah area) On 28 September 2010 five of us flew from Salt Lake to Portland, Oregon and board Amtrak Cascades to Seattle. We transferred to the Empire Builder and left the train in Edmonds, Washington. The scenery along the railroad is really wonderful, some of ...
Read More

Star to Alaska-Magnificent Views and an Average Ship.

Review for Norwegian Star to Alaska

Darnoc
First Time Cruiser • Age 60s
This cruise features Ports-of-call with spectacular scenery and tacky (but popular) tourist shops, mostly jewelry. The time in each port was short and NCL offered many excursion options. Nonetheless, many of the same tours were readily available on the pier at lower prices if you're prepared to take the (minimal) risk of unavailability or tardy return. We only spent, inexplicably, 6 hours in ...
Read More

Find a Norwegian Star Cruise from $449