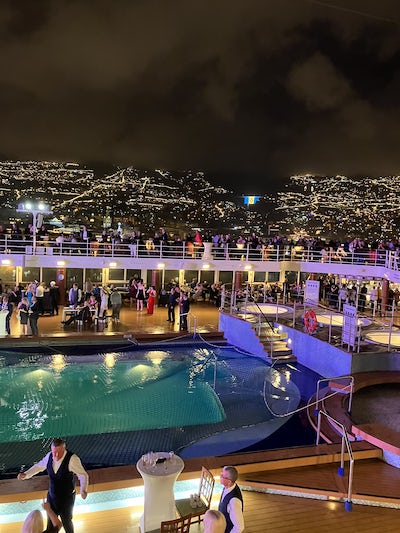 See all photos
Cruiser Rating
3.7
Average
144 reviews
Ratings by category
Featured Review
Strange Times Crusing
"We booked this cruise when it was first advertised months ago thinking there was a good chance that it would be cancelled......There is no doubt that all the Crew and staff of the vessel have had good training for the effects of the pandemic, this weeks next voyage should be made a little easier for them by their experiences on our trip...."Read More

Tired, cheap booze cruise on a cross channel ferry disguised as a cruise ship with the worst food possible

CruiserfromLonfon
6-10 Cruises • Age 50s
I have been with marella a few times. Never glamorous but used to be functional and efficient. Not now. The food in the main restaurants would appear to have come from a 1970’s prison ship and we had mild food poisoning after 2 nights. I know they are cost cutting but the cooking was amazingly bad. Maybe the worst I have ever seen in a commercial setting. The deep fried long hair in the calamari ...
Read More

Paul 120753
6-10 Cruises • Age 70s
We have been with TUI many times before but this last trip has been the worst. From the start the Covid pass checking process was a shambles, you couldnt here the safety video and the whole thing took to long. The standard of food on offer in the buffet has gone down in my opinion, from the meat selection to the standard of cooking, even the vegetables were not cooked properly, the selection ...
Read More

Larrydavid777
6-10 Cruises • Age 60s
Chose this Adriatic cruise as tge highlight was Venice which was subsequently cancelled as could not dock there - we were told this after forking out thousands of pounds) You could choose to travel for 6 hours plus to get there in a day but we chose not to. Eve entertainment was okay but all other was appalling. Dirty plastic glasses everywhere, food just okay. Service was abmissal and covid ...
Read More

daviesb1256
10+ Cruises • Age 70s
We chose this cruise lines because prior to Covid in 2019 we went to the Western Caribbean and had an excellent time and expected the same standard this time round - not so - very poor in every aspect - definitely dumbing down.. Shows were poor; Food was adequate - nothing special'/ drinks were poor beyond words - watered down - trips were too expensive and everything had been paired back ...
Read More

ralphmjr
2-5 Cruises • Age 60s
We have never explored the Eastern Med/Adriatic and were looking forward to seeing new countires and enjoying cruising as we have experienced cruising before.The airports going and returning were manic,queues /delays and yet more queues.The Marella Explorer, crew and staff were excellent,but the ship was tired looking.On arrival to our cabin there were stains on the settee the bed was lumpy and ...
Read More

maynich
10+ Cruises • Age 70s
This cruise was a birthday present for our granddaughter. She chose this because it went to all the places she wanted to visit. This is our 26th cruise and have experienced many cruise lines but would not cruise Marella again. Butlins at sea it certainly was. Tui flights there and back were a nightmare, we flew from Leeds Bradford and noticed other companies were not having delays and baggage ...
Read More

Noreen1961
10+ Cruises • Age 60s
We chose this cruise because of the itinerary and we had two amazing cruises on marella discovery pre COVID. One of the things we loved on discovery was the amazing shows in the theatre every evening, the "shows" on Explorer were dismal, every night there was six very average singers attempting to put on a show on an empty stage. People were leaving the theatre every night, it was embarrassing ...
Read More