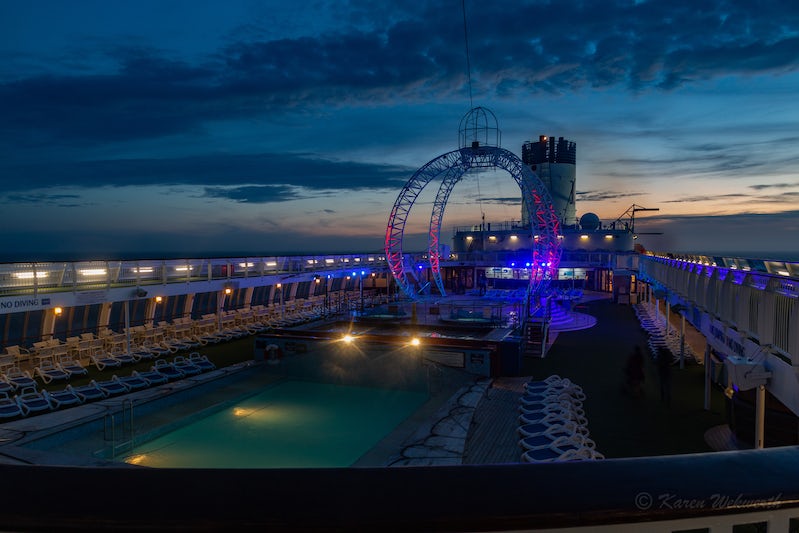 The Vaporizer
First Time Cruiser • Age 50s
This was an impromptu Grab One deal of $750 for a couple for 4 nights. Only after buying did we begin to research cruises. We saw some terrible reviews and were a bit concerned. But we went with an open mind and no expectations of grandeur and were pleasantly surprised. Embarkation is smooth and professional. The choice of food at both complimentary eating places was absolutely fine. We ate ...
Read More

donnatiida
6-10 Cruises • Age 50s
Having cruised with Royal Caribbean for the past 5 - 6 years we decided to give P & O a try on a short trip to New Zealand, then spend time in the land of the long white cloud. Expectations were high as it was supposedly refurbished recently. The following is my review:- SHIP was ok and the shower recess in the CABIN was a welcome change so no problems here. The DINING service was sub-standard and ...
Read More

harleyqu1nn
First Time Cruiser • Age 30s
This was our first cruise (me and my partner). So a lot of things were new to us. For example, we were completely unaware of the credit card hold. Both of our credit cards were blocked because of repeated holds (NAB) and we could not access it from NZ on our entire holiday, even though we both notified our banks we will be going on a cruise to NZ. Embarkation was a bit confusing, since none of ...
Read More

kiwi1963
2-5 Cruises • Age 50s
We chose this four night cruise as a different way of getting to Auckland. We paid A$350.00 each. It was great to arrive refreshed and already on New Zealand time. We were fortunate to experience fairly calm seas and good weather. The Comedy shows were good at night. There wasn't a great deal happening during the day. The pools were closed for half of the time due to the swell. The two small ...
Read More

exRNZN
First Time Cruiser • Age 50s
We did the 4 night Sydney to Auckland cruise. We purchased a super cheap ticket and did not expect a lot for our money. We had an interior cabin and I expected the room to be super small and awful but was pleasantly surprised as it was more than adequate. We paid for extras as and when we wanted them which made the trip more fun. Can recommend the café coffee and cake and it was worthwhile ...
Read More

Our very first cruise, 4 nights Sydney to Auckland. It was AWESOME! Just go! :)

CruisingWithFunPeople
First Time Cruiser • Age 50s
My wife found a great deal on GrabOne, $1860 NZ for us and our 15 yr old son, including our flights from Auckland to Sydney. Had to put down $1300 to secure our booking, and paid the balance by around a month before disembarking. I happened to be dining next to an apparently wealthy couple who had been on numerous cruise liners, and said our cruise was the roughest they've been on, due to the ...
Read More

Pacific Jewel is old and tired

Wilkies2
10+ Cruises • Age 80s
We have done over 20 cruises but this was the first time on Pacific Jewel. Our main complaint was about the ship itself. It is old fashioned in its decor and lacking many of the refinements of more modern ships. The staff, as usual, were very good and could not be faulted. The food was also good and was well organised in the Pantry restaurant reducing waiting time. The Waterfront restaurant ...
Read More

Ship is a little tired... could do with update

torrie
10+ Cruises • Age 70s
We chose the cruise for a get away in the sun...The cruise was very good...except for Noumea. We docked on a Sunday and everything was closed. Not good when you have 3 very active boys (grandchildren) who had been at sea for 2 days...Ended up taking a bus ride for a few kilometres and walked back to port. Mare is very expensive..no local buses or transport to the beach which is 30 mins in bus ...
Read More

MineOzlem
2-5 Cruises • Age 50s
We did the 8 night Taste of New Caledonia from 17/8/17 to 25/8/2017. Sydney, Noumea, Mare and Isle of Pines. Negatives: 1. Docked into Noumea on a Sunday and all shops were closed, except for a couple of little markets. You should not schedule Noumea or any major port for a Sunday. 2. Could not dock at Mare as we were told the swells were too rough for the little boats to carry us to ...
Read More

imf4u
2-5 Cruises • Age 40s
This was our fourth cruise with P&O and we had a great time. Some ports were great and we were very welcomed by local helpers. We were a bit disappointed when we went on Moreton Island for the Feeding the Dolphins. P&O did a great organisation but after us we saw another 2 big groups to feed only 4 to 5 dolphins. It was too crowded and I hope P&O will also look into this. We found the local ...
Read More