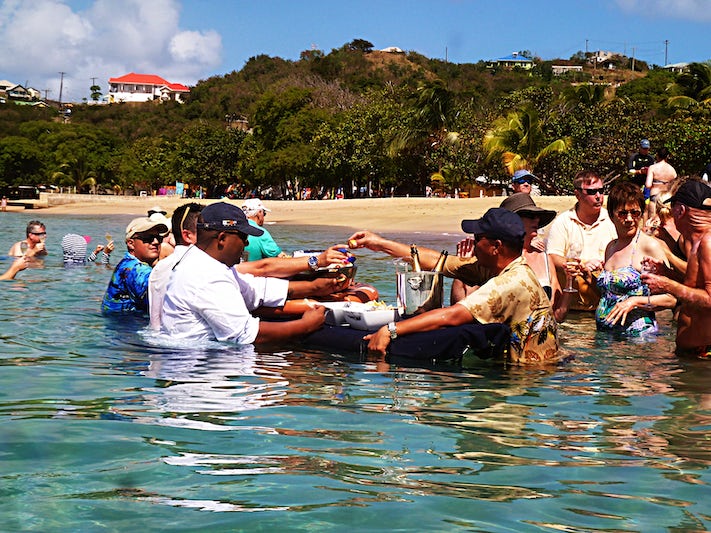 Perhedegaard
10+ Cruises • Age 70s
Seadream II: Antigua - Antigua, March 31 - April 6, 2018. Anyway because of Hurricane Irma’s destruction of St. Maarten Seadream had moved their hub to St. Johns, Antigua for the whole season. A wierd choice because Antigua has no Cruise Terminal - in fact no facilities whatsoever. We came in on an Island hopper from St Maarten during the morning, took a taxi to St. Johns and was actually ...
Read More

Forget the 1-5 ratings; your SeaDream experience is about personal style

PleaseDontSnoNoMo
First Time Cruiser • Age 40s
SeaDream is niche and one's response will depend on how one visualizes a 5-star experience. There's nothing wrong with it, but a lot of what we've come to associate with luxury resorts requires bigness, like walk-in closets, big bathrooms, lots of choices in restaurants and entertainment, structured programs. So, gut check time -- if your lux ideal requires big, then SeaDream isn't for you. ...
Read More

piratelooksat45
10+ Cruises • Age 60s
Time for my annual “state-of-the-union” address. We’ve been sailing SeaDream yearly since 2010. Since every trip has been memorable and there aren’t many reviews posted on Cruise Critic, I’ve tried to write a review for most of our trips. This years vacation stands out as one of our favorites for many of the usual reasons - great itinerary, great crew and service, great fellow passengers, great ...
Read More

dmaislen
10+ Cruises • Age 70s
We'd been with Sea Dream Yacht Club twice before and enjoyed it very much. This trip was our LAST on Sea Dream. We had booked back-to-back cruises for 2018 on board which we have now cancelled. Our stateroom was OK...it was one of the ones that can be converted into a suite. The layout was set up for combining cabins...not for being an individual room. The first week we had one chef and ...
Read More

TheRedWiner
10+ Cruises • Age 70s
I am a veteran of many cruises, from Atlantic crossings on the old Italian Line, to the Home Line, to Celebrity and Royal Caribbean ships, including the Oasis of the Sea. I have brought my children and grandchildren on cruise vacations. I have traveled with groups and with just my wife. We enjoy cruising. This was the first time on a small ship for my wife and me. We traveled with a group of 23 ...
Read More

Review for SeaDream II to Caribbean - All

Rzanjo
2-5 Cruises • Age 40s
We boarded the SeaDream II yacht/cruise ship around 2pm. After a greeting by the captain, we were directed to a lounge with hors d'oeurves and flowing champagne. We waited there while our luggage was delivered to our stateroom. We met a few people there: a couple from Dallas, a couple from Toronto, and a mother/daughter traveling from New Jersey. Everyone was friendly and inviting. We then ...
Read More

Review for SeaDream II to Caribbean - All

Sandy V-M
6-10 Cruises • Age 70s
My husband Ross and I spent 2 wonderful weeks on SeaDream II staying in the Admiral Suite. In the first week on board we renewed our vows for our 10th wedding anniversary, Officiated by Captain Lund, it was such a happy and fun experience, as everything was organised through SeaDream leaving Ross and myself to just thoroughly enjoy the whole ceremony, we were so impressed with the crew who did ...
Read More

wjudson461
First Time Cruiser • Age 70s
Today, anyone who has the desire to take a cruise can find something that suits their tastes and price range. From mammoth "floating cities" with all the bells and whistles, medium-sized vessels in all price ranges and very small ships, usually costing a little more but including more in the cruise fare, there is something for everyone. But for most of cruising history, an ocean voyage was the ...
Read More

garysarah
First Time Cruiser • Age 50s
I reviewed our trip last year on Seadream I (which is incorrecly listed as December, it was actually February) so I won't go over the same things I wrote about in that review. I will just add some different thoughts We flew into St Thomas on a Cape Air 8 passenger plane from San Juan. It was a $20 fare to the pier and took about 10 minutes. I didn't think the service was quite as good as ...
Read More