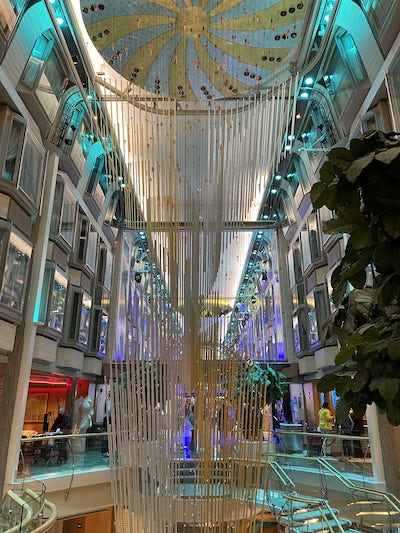 WAYFARING STRANGER
10+ Cruises • Age 50s
We had a terrific time on this Latin American cultural immersion cruise. There was Latin music to dance to every night. I don't speak Spanish, but all of the Royal Caribbean staff spoke English and we thoroughly enjoyed the Latin American influenced food. The entertainment was excellent, and we loved the acrobatic aerial show in the Centrum. The food in the main dining room was outstanding, and we ...
Read More

valleybilles
2-5 Cruises • Age 50s
Coming from Western Canada, the airfare to Panama was about the same as Miami or Puerto Rico but the cruise was better priced than the others so we chose this cruise. We rented a car at the Airport in Panama City and stayed overnight at the Mariott Metromall. We were lucky enough to buy a toll card from the attendant at Thrifty. The drive to the hotel and the drive out of the City was a challenge. ...
Read More

Great Ports and good experience with the Latin American

Indybeachgal
6-10 Cruises • Age 50s
We had a very nice cruise which was both exciting seeing all the new ports and experiencing the Latin American culture and also relaxing as for us there wasn't a lot to do on the ship so there was no guilt in going to bed early! We stayed the night before the cruise in the Country Inn and Suites Panama Canal and then hired Rudy's Private tours to show us the sites of Panama (both pre and post ...
Read More

bellevillecruiser
6-10 Cruises • Age 60s
My wife and I took this "Cultural Awareness" cruise last week. Although the majority of the passengers were from Latin America, as English speaking Canadians, we felt no discomfort whatsoever. All of the staff onboard spoke English, and Royal Caribbean delivered their typical excellent service. If you enjoy the evening shows, then you may be dissapointed as the majority where in Spanish, however ...
Read More

Good and Bad on RC Grandeur of the Seas.

Review for Grandeur of the Seas to Caribbean - Southern

branole
2-5 Cruises • Age 40s
My wife and her parents were excited to take a South Caribbean cruise last April. Have cruised out of South Florida before and thought that flying and cruising out of Panama would be different and exciting. The ports of call were Cartagena Colombia, Bonnaire, Curacao, and Aruba. The first red flag should have been when our travel agent called 2 weeks before the cruise to inform us that this was a ...
Read More

purdo96
6-10 Cruises • Age 40s
My wife and I have taken 7 previous cruises together, most of the trips with another couple that we have known since college. We have all traveled together worldwide and cruised in both the Caribbean and Europe. Three of us have been to 5 continents and my wife has been to all 7 continents. I say all of this to indicate that we are all open to new experiences, however the Latin influence on ...
Read More

10isgirl
10+ Cruises • Age 40s
We arrived a day early and stayed at the Marriott Courtyard next to the Multiplaza Mall. I highly recommend this location for a hotel. The mall is high-end and has restaurants. We used www.myfriendmario.com for transportation from the airport to the hotel ($12.50 per person). They also transported us to the port for $23/person. They were early and professional. It took 1 hour and a 1/2 to get to ...
Read More

What an Awesome Time on this Charming Ship!

Review for Enchantment of the Seas to Panama Canal & Central America

Samuelk728
First Time Cruiser • Age 40s
We just got back from an 8 night cruise on board the Enchantment of the Seas - Royal Caribbean. Embarking out of Colon, Panama, with stops in Puerto Limon, Costa Rica; Cartagena, Colombia; Santa Marta, Colombia; and Oranjestad, Aruba; finally docking in Fort Lauderdale, FL. For those of you who want details on the actual ship "The Enchantment of the Seas" let's get started. It's a very nice ...
Read More

Enchantment of the Seas from Panama to the Dutch Caribbean!

Review for Enchantment of the Seas to Caribbean - Eastern

BobandJoanne
First Time Cruiser • Age 50s
This is my review of the Enchantment of the Seas Columbia and Dutch Caribbean cruise: Prior to departure we spent two days in Panama City taking in the sites and the Panama Canal. We had a private tour which was fantastic! If you ever find yourself in Panama, the canal is a must; we spent several hours there watching the ships; truly fascinating! Now, onto the cruise; we boarded the ship in ...
Read More

AS PORTO WINE : OLDER IS BETTER

Review for Enchantment of the Seas to Caribbean - Southern

EUROPEU
First Time Cruiser • Age 70s
THE BACGROUND After 3 cruises in 2008 and 2009 I had decided to stop to cruise because I felt a gradual lack of quality . But as I was in Brazil and profiting of direct connections with Panamá I decided to try another cruise. The reservation was made through a travel agent without problems. However whwn I intend to reserve a dinner in Chops Grill and some excursions I was surprised with a refusal ...
Read More