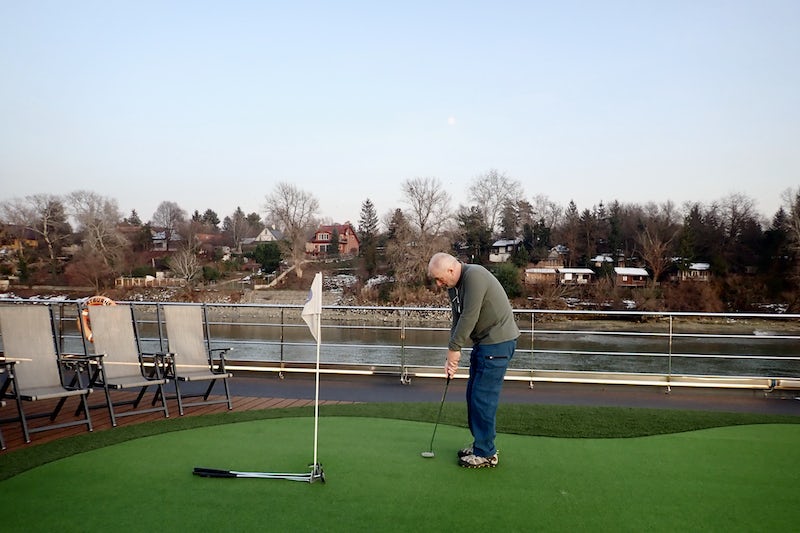 I Provided A Night's Entertainment and Prizes

We chose this cruise from Avignon because it ended up in Lyon where we have family we wanted to visit. The cruise overall was fair to good but could have been much better. From speaking with the staff, they have heard the concerns before but have not acted upon them. Embarkation was poorly planned. We were to meet at Hotel Kyriad in Avignon for a 4:30 p.m. pick up - which is way too late. ...
Read More

Not as good as our heart of Europe cruise 2 years ago with Riviera.

We had high hopes of this cruise with previous experience of the company and fairly good reviews. The flight to Lyon was fine but had to wait nearly 30 minutes for one of our party in a wheelchair who seemed to have very little assistance which I was promised also but didn’t get. To get to the coach with was parked some 10 minutes walk away across roads up and down pavements hauling all your ...
Read More

Nice ship, but not 5 star

Just returned from a 7 night cruise to Provence on the river Rhône from Lyons to Avignon. The ship is classed as 5 star, but I would take issue with that. What we found disappointing, was the way the cruise was structured. We started the cruise at Lyons, then sailed upriver to Chalon sur Soane for Beaune, we had a pleasant excursion to Beaune, after which we sailed slowly back down the ...
Read More

Good but should have been better

Traveled before with Riviera. Wanted to try a river cruise as the advertising and hype suggested it would be a wonderful 5* holiday and worth the expense. Can't fault the ship. Clean and well maintained. Cabin and bathroom decent size. A fridge is needed though. Ice was NOT always available as advertised. Food extremely good but no choice of wine other than red, white or rose on the ...
Read More

We booked a cruise with Riviera Cruise on the 25th August 2017 and flew out on the 21st June 2018 for 7 days. After some research and watching your virtual tour of the ship; we chose this holiday with you company. I think it’s only fair to give the positive feedback first: We found the front of house staff excellent and very helpful We found the cabin staff that looked after housekeeping ...
Read More

Not what it says on the tin

We had previously cruised with Viking, Riviera comes nowhere near. The ship is clean, modern and everything works but sadly both the ship's owners and Riviera just don't seem to know the difference between fair and excellent. Let's start with the dining room - we were a party of 4, unless we arrived promptly, and I mean when the barrier was removed, we didn't couldn't have sat together. There ...
Read More

After several ocean cruises, we decided to take a river cruise and chose the Oscar Wilde from Riviera Travel including the Rhine gorge, finishing in Basel. We took the Eurostar from St. Pancras, London, to Cologne to board. This proved to be a marathon journey starting with very tight security in St Pancras station which does not seem to have the space for all who are waiting to board the train. ...
Read More

My wife and I with two friends have just returned from the Riviera Five Star River Douro Cruise from Porto, Portugal on the Riviera Douro Elegance boat. The Riviera Representative met us at the airport on arrival and after a little delay we boarded the coach and the transfer to Porto was about 45 minutes. The staff on board were very helpful and friendly as expected. The quality of the ...
Read More

I wanted to visit this part of Germany. The description of the various places was quite attractive. However we spent most of the time on board (Swiss Tiara, this name is not mentioned on the list) and had little time to visit the sights. As it was a river cruise, I did not expect to stay on the ship that long and was disappointed. The first 3 days, we only had the morning to visit Regensburg, ...
Read More

Not the Five Star experience advertised

My husband chose this cruise to celebrate his 70th birthday. We have done many ocean cruises on various cruise lines and one river cruise - the Mekong. I had done a considerable amount of research into all the cruise companies who offered cruises on the River Douro and chose Riviera Travel because of its reputation in the UK and the fact that the Douro Elegance was a new ship. The lauded five ...
Read More