Mariner of the Seas Review 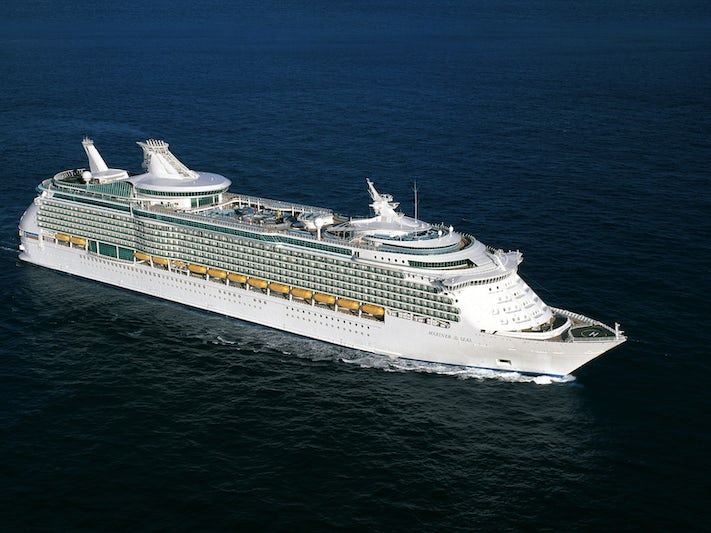 Mariner of the Seas is an affordable Caribbean cruise option with just enough action to make your short Caribbean vacation one to remember. One of Royal Caribbean's Voyager Class ships, Mariner of the Seas ticks all of the boxes for a great cruise: comfortable (if dated) rooms, solid free and specialty dining, and an array of activities like the Sky Pad bungee trampoline, a FlowRider surf simulator and lively pool deck. Mariner of the Seas' deck plans are also great at separating the buzzy action from cabins, making it easy to unwind.

In 2018, Mariner of the Seas underwent a massive renovation that gave public interiors a fresh look, from the grand Royal Theater to the Promenade and the pool deck. That all makes Royal Caribbean's two- to five-night itineraries on Mariner of the Seas a great bet for sunseekers needing a quick Caribbean escape.

Mariner of the Seas Deck Plans Spread Out the Fun

Mariner of the Seas deck plans are intelligently designed, making this smaller Royal Caribbean ship feel just the right size. Passengers can move about almost anywhere without crowd and elevators zip up and down to Windjammer Marketplace (the 180-degree-view buffet), pools, the gym, spa and other amenities from both forward and aft locations.

Food, drinks and entertainment are all within easy reach across Mariner of the Seas' 15 decks. But most of the action centers on Decks 4, 5 and 11, which hold the cruise ship's main public spaces (Honestly, though, almost every deck has at least one destination worth a visit).

Deck 11 is a go-to for almost everyone on board Mariner of the Seas. You'll find family-friendly pools, DJs, live reggae music, the adults-only Solarium Pool, and access to the kid-friendly FlowRider, Perfect Storm Waterslides and Sky Pad. Don't worry, though, Mariner of the Seas' deck plans separate the more raucous destinations from the more tranquil ones (like your cabin -- thankfully).

The Royal Promenade is the centerpiece of Deck 5. Mariner's bright and busy thoroughfare is lined with shops, bars like the sharp The Bamboo Room and casual Playmaker's Sports Bar plus Cafe Promenade for free light bites throughout the day. You'll also find the Star Lounge here, which hosts nightly karaoke.

You'll also want to head downstairs to Deck 4 to visit some of Royal Caribbean's most iconic spots, including The Schooner Bar, which hosts piano music, lively singalongs and trivia every night. Royal Theater is right next door for song-and-dance shows as well as Mariner's riotous game show Love and Marriage. And if you're feeling lucky, have a go at the tables and slots in Casino Royale.

All in all, Mariner of the Seas' deck plans let you float from place to place, eat, grab drinks, play mini-golf and watch movies by the pool without elbowing through rowdy crowds or enduring long lines.

Mariner of the Seas Rooms Are Comfortable, but Dated

Rooms aboard Mariner of the Seas are comfortable. Expect hotel-worthy beds, banquettes or pull-out couches and enough storage space for the short itineraries that the ship makes. However, they're undeniably dated. Expect '90s-print curtains, light oak furnishings, and pink paneling. That being said, they are mostly free of major wear and tear.

Mariner of the Seas' cabins to avoid are generally Interior or inside rooms. The lack of natural light, combined with the aging decor, means that Interior Mariner of the Seas rooms aren't exactly bright and open. Instead, you're getting a quite stereotypical and cramped cruise room. You'll likely want to avoid rooms of Mariner of the Seas Deck 3 -- both Interior and Ocean View -- as it will put you on the same floor as the Royal Theater and Studio B, where the ice show happens.

Specialty Restaurants on Mariner of the Seas Shine

Mariner of the Seas dining is fairly great across the board, from the extensive breakfast buffet at Windjammer Cafe to dinners in the Main Dining Room and specialty restaurants like Izumi, Chop's Grille and Jamie's Italian.

Royal Caribbean's Izumi is one of the most popular specialty restaurants on Mariner of the Seas if you're after high-energy hibachi dining. Izumi Sushi is located inside of the restaurant, and has a large assortment of rolls (which can be custom ordered for vegetarians and those who cannot eat gluten).

If you're after a romantic date night, the extensive menu of steaks at Chop's Grille is likely the best bet on Mariner of the Seas, though the fresh pastas at Jamie's Italian (named after Jamie Oliver, the celebrity chef) are definitely worth a meal.

Mariner of the Seas' free dining is also quite good. The breakfast buffets at Windjammer are extensive, with a huge array of international options and sweet treats. For dinner, you'll want to skip the rather empty buffet and opt for the beautiful Main Dining Room, where menus including crowd favorites like pastas and fish are executed with creative twists.

For the most up-to-date testing, masking and vaccination requirements about Mariner of the Seas, please refer to Royal Caribbean. You can also use Cruise Critic’s guide to masking, testing and vaccine requirements on the world’s major cruise lines as we know them.

Something surprising to see or do around every corner, no shortage of action onboard

Rooms are dated; prices for private island excursions and activities are high.

What's Included on Mariner of the Seas (and What's Not)

Costs Included with Your Mariner of the Seas Cruise Fare:

● The Main Dining Room, Windjammer Marketplace, Cafe Promenade (food), Arctic Zone frozen yogurt and Dog House
● Casual dining options at both Labadee and Perfect Day at CocoCay private islands
● Water, juice, filter coffee and tea
● Shows and game shows in Royal Theater and Ice Under the Big Top in Studio B (book early for the latter)
● Most activities and events, except as noted below or in the daily schedule
● Use of the fitness center and fitness classes
● Use of the sports center, water slides, FlowRider surf simulator, Mariner Dunes mini-golf course and SkyPad Bungee trampoline
● Daily Adventure Ocean children’s programs
● Poolside games, movies, and entertainment

Costs Not Included With Your Mariner of the Seas Cruise Fare:

● Daily gratuities, which vary based on your class of room
● Auto-gratuities applied to salon, spa and beverage purchases, as well as most specialty dining reservations
● All drinks not listed as included above
● Room Service (flat fee per order)
● Specialty dining, including Johnny Rocket's
● All treatments and services in the spa and salon
● Sessions in the Royal Caribbean Escape Room
● Activities like bingo, arts and crafts, arcade games, alcohol tastings and shopping events
● Casino slots and tables
● Nighttime kids' club programs in the Adventure Ocean facility
● Shore excursions, including the water park at CocoCay and zip line at Labadee
● Internet access
● Photos and artwork

The vast majority of passengers on Mariner of the Seas hail from the United States, especially the Miami drive-to market. Expect to hear a lot of Spanish onboard, with signage in English but most announcements provided in English and Spanish. Our fellow passengers were younger, with a good number of young families and millennials onboard.

First things first: What should you wear when you're ready to eat? Luckily, Mariner of the Seas' dining dress code is fairly straightforward and casual.

For breakfast or lunch at Windjammer Marketplace, dress for the warm weather: shorts and T-shirts are fine, as are flip-flops. Tank tops aren't encouraged on men, but we saw plenty of them during our most recent sailing on Mariner of the Seas. The same rules apply for lunch at Windjammer, though the Main Dining Room, Jamie's Italian, and any other specialty restaurant that's open for lunch is a bit dressier: Nice short-sleeved shirts and shorts are fine. Bathing suits and bare feet aren't allowed at any indoor restaurants at any time.

For dinner, business casual is the safest bet. Slacks or chinos plus nice short-sleeved or long-sleeved T-shirts, button down shirts, or polo shirts are more than appropriate on most nights in all dinner venues. Women can add skirts and casual dresses to the mix. Men should come with closed-toe shoes or clean sneakers for dining on all nights.

There is technically one formal night on Mariner of the Seas sailings. However, we've seen a fairly wide spread of interpretations on board; everything from suits and formal dresses to toned down business casual tends to be the norm. On the flipside of formal night, don't forget your Hawaiian shirts for the ubiquitous Hawaiian shirt nights.

Get Mariner of the Seas price drops
250,000+ people have entered their email

Find a Mariner of the Seas Cruise from $179

More about Royal Caribbean Mariner of the Seas

Where does Royal Caribbean Mariner of the Seas sail from?

Royal Caribbean Mariner of the Seas departs from Port Canaveral

Where does Royal Caribbean Mariner of the Seas sail to?

How much does it cost to go on Royal Caribbean Mariner of the Seas?

Cruises on Royal Caribbean Mariner of the Seas start from $179 per person.

Is Royal Caribbean Mariner of the Seas a good ship to cruise on?

As second port related issue on this sailing was that Mariner of the Seas sailed from her usual terminal, #1 but returned to Terminal #5....a real inconvenience.Read More
Isla Lovers

Let me get the only negative aspect of our cruise over with so we can proceed to all the great experiences onboard Mariner of the Seas.Read More
dvvtravel@hotmail.com

A few months ago we were on the Mariner of the Seas and had a bad experience with the food which I reviewed on this site.Read More
RCdiamond2

If you are looking for a good cruise experience, the Mariner provides most of what the larger newer mega ships are offering, with fewer passengers on board, easy navigation around the ship, lots of openRead More
ROYERSKINE