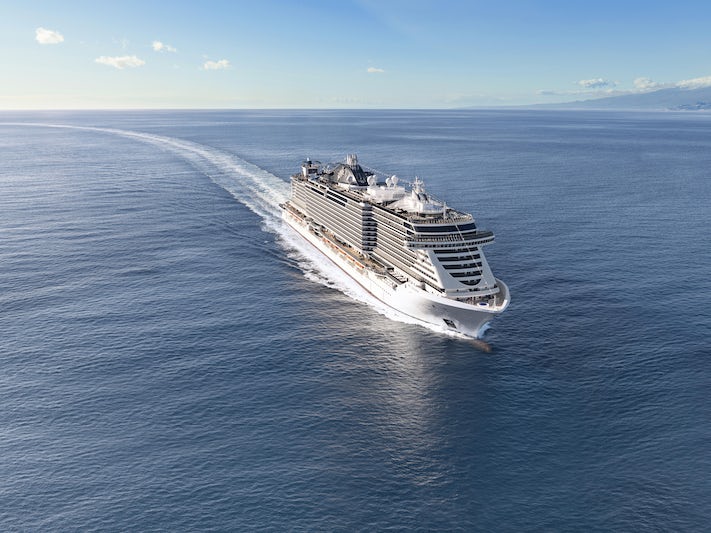 MSC Seaview is a ship that doesn't shy away from embracing fun -- whether that's careening down the longest ziplines at sea, shooting water cannons at fellow passengers on the ropes course or dancing around the ship -- day or night. It's also a late-night ship -- the Garage disco closes when the last guests meander off to bed; the third seating for dinner is at 9:30 p.m. (yes, you read that right) and the final theater show is at 10:15 p.m.

Still work to be done on service and food quality.

Beautiful ship, where the fun never stops and perfectly designed for warm-weather sailing.

Seaview is also a very family-friendly ship -- and we're not talking about shoving the kids in the kids club all day family friendly -- kids are embraced everywhere and at pretty well all times of day or night (we saw babes in arms at the late-night disco). There's no minimum sail age, and parades, scavenger hunts, kids' discos, pool parties, sports tournaments and shows are not confined to the Doremi Club -- they are all over the ship.

With so much fun onboard, it's no surprise that Seaview really is a party ship. But it's one of, if not the most stylish and elegant party ships we've ever encountered, both in terms of its design and decor as well as in the quality of the optional dining venues, and even the upmarket nature of the onboard shops.

For the most upscale experience you can have on MSC Seaview, cruisers will want to check out the MSC Yacht Club, the all-suite, keycard-access complex, which is as close to ultra-luxury as you can get on a giant mainstream ship.

Seaview is also very European (or Brazilian, if you're sailing over the winter months); which may or may not be to your liking. As mentioned, onboard life goes until late and, unfortunately, service levels are not always what North Americans might expect. We found service to be more functional and less friendly. Additionally, Europeans (especially Southern ones), don't really understand the concept of waiting in line and though English is the first language, both in terms of announcements, signage and the majority of crew being able to speak it, the passenger mix hails from a multitude of different countries with not all passengers so fluent. Food also leans more toward the Mediterranean than, say, Texas. On the subject of food, it is hit and miss: a solid bet in most of the for-fee eateries, but sometimes not up to par in the free dining venues.

Get MSC Seaview price drops
250,000+ people have entered their email

Having said all that, MSC has made strides in ensuring its ships have more of an American feel both in terms of food and service, while maintaining its Italian heritage. And despite the ship's size, its design is such that it's hard to get lost and, even on sea days, it rarely feels crowded.

MSC Seaview spends summers in the Mediterranean and winters in Brazil, so expect nationalities to match its deployment. On a typical Med sailing you can meet as many as 45 nationalities, made up predominantly by Italians, Spanish and French, with Brits, Americans and Germans also well represented. You'll also find increasing numbers of Chinese, Japanese and Indians onboard. In Brazil, it's almost exclusively Brazilians. As a result, announcements reflect the passenger mix. English is the first language wherever you are (it's the line's official language), but when in the Med, you will get multiple announcements in as many as six languages. In Brazil, it will just be English and Portuguese. The majority of crew are fluent in English.

MSC is a family-friendly line and you'll find lots of kids at almost any time of the year as each European country goes on vacation at different times.

The average age for most passengers is mid-40s.

MSC Cruises is definitely a casual ship during the day -- shorts and T-shirts are perfectly acceptable wear pretty well everywhere onboard. Come the evening, it's a slightly different vibe as the Europeans do like to dress up and there are two "Elegant Nights" (equivalent of Gala Nights), where you will see the men in tuxedos and dark suits with ties and the women in ball gowns -- and even the children in suits and dresses. Note, this is not enforced (except in the main dining room), and if you don't wish to dress up you can always head to the buffet.

Find an MSC Seaview Cruise from $139

Where does MSC Seaview sail from?

Where does MSC Seaview sail to?

How much does it cost to go on MSC Seaview?

Already at home after 2 years of cancellations and changes of ships and itineraries, finally I was able to cruise the western Mediterranean again, this time on the MSC Seaview, and finally enjoy a fewRead More
frrivadulla

MSC Seaview is a modern, bright and glitzy ship so, if bright lights, mirrors everywhere and polished steel are what you like then you will love it.Read More
cruiser4602